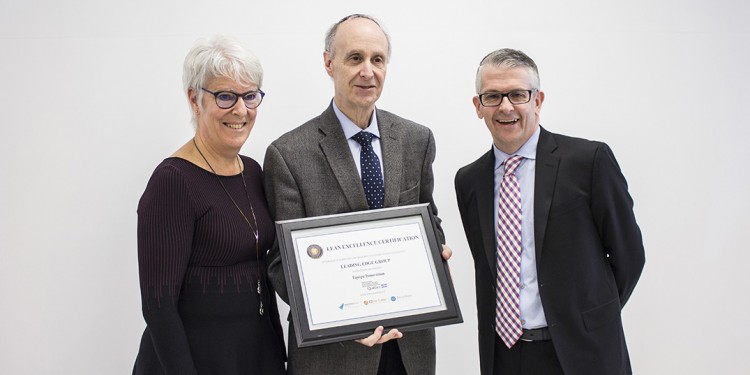 Alan Maislin, President of the Board of Directors of CIUSSS West-Central Montreal.

Three directorates and a specialized team of CIUSSS West-Central Montreal have received a nearly perfect score from an international firm that evaluated their use of Lean principles in continuously striving to improve services for users of health care and social services.

The collective score of 4.9 out of 5—the Gold Level—was praised as “a tremendous achievement” by John Whelton, the Toronto-based Vice-President of Operations for the Leading Edge Group, which works with and certifies organizations and companies around the world that implement the globally recognized concepts of Lean management.

Dr. Lawrence Rosenberg, President and CEO of the CIUSSS, called the occasion “an important moment in the history of our CIUSSS,” which has now become the world’s only healthcare network to be designated by the Leading Edge Group as a Lean Centre of Excellence.

He said Lean principles provide managers with a uniform set of standards to aspire to and maintain, while enabling them “to speak a common language, so that everybody is working toward the same thing and nobody is working at cross-purposes.”

“You’ve done an absolutely fantastic job,” Mr. Whelton told CIUSSS managers who had gathered at Donald Berman Jewish Eldercare Centre on December 5 for the certification ceremony. “This is an outstanding achievement. Your challenge now is to maintain what you’ve done and to innovate further.”

Certification for excellence in Lean management was awarded to the Innovation team, the Directorate of Frontline Integrated Services, the Directorate of Mental Health and Addiction, and the Home Care division of the Support Program for the Autonomy of Seniors.

“Our objective is to be the best,” said Alan Maislin, President of the CIUSSS Board of Directors. “We have to keep innovating and we have to drive our services to a level that no one else has achieved. This certification today is part of that journey.”

The long road to certification began in 2010 (the pre-CIUSSS era), when Dr. Rosenberg initiated contact with Leading Edge and began promoting Lean principles at the JGH.

In 2016, after the CIUSSS had come into existence, he made Lean certification an organizational priority for the network, placing supervision of the process in the hands of Joanne Côté, who has since become Director of Quality, Innovation, Evaluation, Performance and Clinical Ethics.

When the auditor from Leading Edge examined the CIUSSS earlier this year, he was particularly impressed by the way information is shared among managers and staff, says Ms. Côté.

Barbra Gold, Director of the Support Program for the Autonomy of Seniors, joins managers from the directorate’s Home Care section in accepting a certificate from Dr. Lawrence Rosenberg (third from left), John Whelton (second from right) and Joanne Côté (right).

She adds that this free flow of information enables everyone to be aware of actual or potential problems and to establish managerial priorities, based on the practical, day-to-day experiences of staff.

“One thing that really stood out when the auditor visited us was the obvious pride that everybody on staff was taking in showcasing what they were doing,” Ms. Côté says. “They also made it clear that the Lean principles have made it possible for them to be properly heard, especially when action is taken and changes need to be made quickly.”

Ms. Côté admits she was surprised but gratified by the final score, “which exceeded expectations.” She says the results have added momentum to the next round of training, whose goal is certification of the Directorate of Nursing and the Directorate of Human Resources, Communications, Legal Affairs and Global Security.