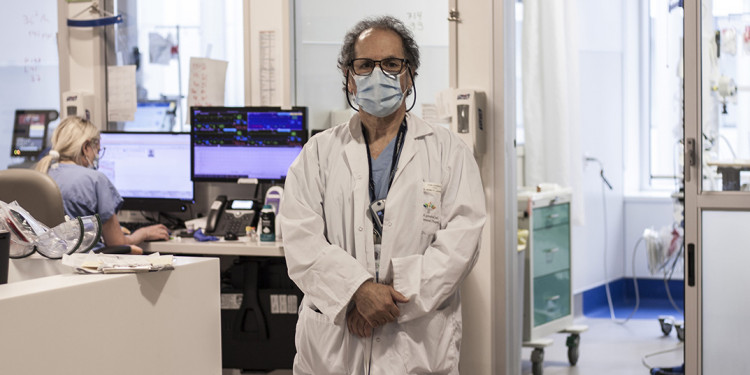 Dr. Denny Laporta in the Intensive Care Unit at the JGH.

As Dr. Denny Laporta, former Chief and current member of the Department of Adult Critical Care, eases into semi-retirement, his colleagues have acknowledged his extensive contributions by establishing an award in his honour.

The Donald P. Laporta Award for Excellence in Respiratory Therapy will be presented each year to an outstanding respiratory therapist who has demonstrated leadership, passion and excellence.

The inscription on the plaque notes that the award recognizes Dr. Laporta’s “distinguished career of care for the critically ill as Chief of Adult Critical Care and Medical Director of Respiratory Therapy.”

“I’m very touched to have the award named for me, because I continue to have a strong interest in seeing respiratory therapy progress and maintain its important position in intensive care,” says Dr. Laporta, who joined the JGH in 1984 and led his department from 1999 to 2009.

He adds that his extensive experience in pulmonary medicine has been extremely helpful in his duties in Adult Critical Care, especially since the Chief of the ICU simultaneously serves as the Medical Director of Respiratory Therapy.

Dr. Laporta credits Dr. Paul Warshawsky, current Chief of Adult Critical Care, for giving him the opportunity to remain active in the ICU, while taking the initial steps toward retirement.

“Denny has dedicated his life to taking care of individual patients, as well as making sure our ICU provides patients with the urgent care they need.

“It’s a nice way of tapering off, as opposed to leaving abruptly,” he says. “I’m grateful to be able to streamline it in a way that suits me and the hospital at the same time. After all, I still think of myself as a doctor; that doesn’t turn off on the day you retire.”

“Denny is the epitome of the caring, thoughtful physician,” says Dr. Warshawsky. “He has dedicated his life to taking care of individual patients, as well as making sure our ICU provides patients with the urgent care they need. He’s a true mensch (Yiddish for a person of integrity and morality).”

Dr. Warshawsky adds that Dr. Laporta has also been active outside the JGH, with a leadership role in the Société des Intensivistes du Québec. As well, he has worked with Safer Healthcare Now—a Canadian campaign to improve patient safety—on measures to prevent ventilator-associated pneumonia.

Among the achievements that Dr. Laporta counts as his proudest during his term as Chief was ensuring that the ICU continued to grow in size and sophistication in tandem with the expansion of certain other departments and services at the JGH.

For example, he says, when the Segal Cancer Centre opened in 2006, the ICU had to be able to handle additional critical cases related to the higher volume of cancer patients. The same was true when the cardiac surgery program was created, since post-surgical care for cardiac patients begins in the ICU.

The most dramatic change that Dr. Laporta has witnessed was the ICU’s move to the newly constructed Pavilion K in 2016. “It was an incredible contrast to see all of that light in a spacious environment that was less infection-prone, with greater privacy and much less noise for the patients.

“Before the move, we had to make the best of a cramped, 1970s-model ICU, which was fine in its day, but not any longer. We desperately needed the extra space, because we now use more and bigger machines around the patient’s bed, and we need additional room for procedures—which is what Pavilion K provided.”

Dr. Laporta says he was also proud to be among the staff in the eye of the storm during the earliest and most difficult months of the COVID-19 pandemic. “Of course, everyone in the hospital had an important role to play, which they did very well, but Paul and the entire ICU team handled their responsibilities in an exemplary fashion.”

This professionalism and compassion have remained consistent in the ICU over the decades, Dr. Laporta says. “What you need—and what we have—is a unit where efficient people are making efficient decisions. They have to know exactly what they’re doing, and then they proceed with respect, collegiality and a can-do attitude.

“I’ve thoroughly enjoyed this aspect of the Jewish throughout my years here. It’s what has enabled us to advocate for our patients, deliver the best care we can, and ensure that our patients get nothing less than the care they need.”