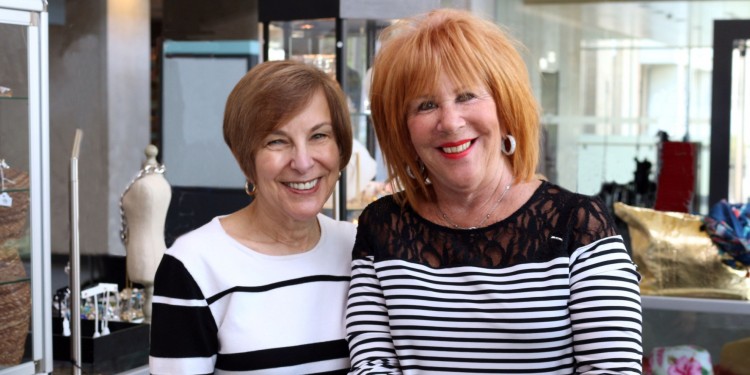 Auxiliary Co-Presidents Beatrice Lewis (left) and Reisa Lerner behind the counter of The Auxiliary’s Mildred Lande Gift Boutique in the hospital’s main lobby.

If Reisa Lerner and Beatrice Lewis sometimes seem to share the camaraderie and easy-going banter of a couple of schoolgirls, there’s a good reasons for that: The new Co-Presidents of The JGH Auxiliary have been friends since they were teenagers.

“Reisa was 13 and I was 14,” says Beatrice, “and even though we weren’t in the same class in our school in NDG, we became close.”

“We’re both avid readers who love the arts and have worked as teachers,” notes Reisa, “so it comes naturally to us to bounce ideas off each other and value each other’s opinion.”

“There are no friends like old friends,” Beatrice adds. “Their value just keeps increasing with age.”

Their lives have even followed remarkably similar paths. After graduating from university (Reisa from Sir George Williams, Beatrice from McGill), they stayed in touch as they pursued careers as elementary school teachers—“We’d wave as we passed each other on the way to work,” says Reisa—and then stepped back to raise a family.

On her return to the work force, Reisa taught English as a second language and opened a Quebec-certified language school for lawyers and other corporate clients. Meanwhile, Beatrice taught literacy to adults and then spent 28 years at St. George’s Elementary School in Westmount, including 18 years as Director.

Coincidentally (again!), both retired in 2007 and became increasingly active in The Auxiliary, which they had joined several years earlier. Given their overlapping interests, Beatrice and Reisa were instrumental in popularizing the mid-winter Snowbird Lunch and Lecture, whose most recent edition drew 125 people to the Florida home of Past Auxiliary President Sheilah Greenberg.

Both also helped to transform the Menus for the Mind series—each program consisting of a stimulating movie, lecture and light meal—into one of The Auxiliary’s most in-demand programs.

As they begin their two-year term, the Co-Presidents find themselves heading a vibrant organization of nearly 2,000 volunteer members. When their predecessors, Linny Blauer and Phyllis Karper, stepped down this past May at the Annual General Meeting, they announced that since 2013, The Auxiliary’s fund-raising programs had channelled about $2 million to such JGH departments as Surgery, Nursing, Psychiatry, Pulmonary Medicine, Cardiology and Neonatal Intensive Care.

With an eye on the future, Beatrice says she hopes their leadership will help a younger generation of new members to feel the same love and warmth that she herself has always experienced in The Auxiliary. Reisa cites the Tiny Miracles campaign (to help premature babies) and Mindstrong (a physical fitness event) as examples of the kinds of fund-raising initiatives that appeal to new generations of participants.

“Wherever you go in the hospital, or even outside, when you tell people you’re with The JGH Auxiliary, it’s a ‘Wow’ moment for them,” says Beatrice. “The funds that have been raised for so many departments have given The Auxiliary an incredible amount of exposure and respect.”

The only down-side, says Reisa, is the realization that difficult economic times still lie ahead, “but that makes what we do so much more challenging and uplifting. It’s precisely when budgets are tight that The Auxiliary’s contribution to the hospital is so greatly appreciated.”