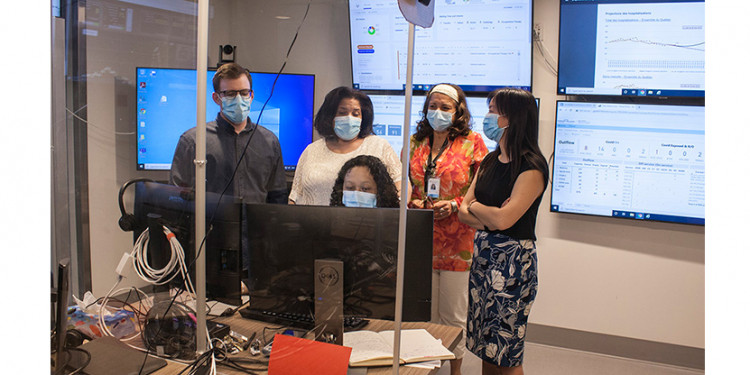 In the Command Centre at the JGH, the discharge and/or transfer of patients is discussed by Suzette Chung (seated), Head of Discharge Planning for the hospital; and by (from left) Matthew Wener, Physiotherapist and team member in the Access Point for Rehabilitation Beds in Physical Health and Respiratory Care; Arleyne Coombs, Chief of Social Services; Marcia Da Silva, Social Worker in the Directorate of Mental Health and Addiction; and Thu Hanh Ngo Nguyen, Access Program Manager. The screens behind them display up-to-date information about the condition and progress of healthcare users in the JGH and in other CIUSSS facilities. (Click on this or any photo to enlarge it.)

Suddenly, there it was: an empty bed—one of the most precious commodities in patient care. It’s not something that Nathalie Farley had expected to find on a recent spring morning at Catherine Booth Hospital, a member-facility of CIUSSS West-Central Montreal. But the bed was indeed available, due to the late discharge of a patient the previous day.

As a Coordinator who helps manage admissions to Catherine Booth, Ms. Farley had to act quickly. After all, every hour a bed sits empty is an hour that could have been better spent helping a patient (often someone elderly) through rehabilitation and, ideally, a return to self‑sufficiency.

So Ms. Farley contacted a colleague in the CIUSSS’s Command Centre, the new digital hub that, among other activities, helps streamline the movement of patients and clients back to their own homes or from one CIUSSS facility to another.

Specifically, Ms. Farley got in touch with Suzette Chung, who oversees discharge planning at the JGH. The query: Did the JGH have a patient whose treatment had ended and who met the criteria for transfer to Catherine Booth? If so, could that person’s discharge from the JGH be hurried along?

Ms. Chung’s answer on both counts was Yes. “By consulting the updated rehab patient list in the Command Centre, I was able to identify someone who could be transferred on such short notice—the kind of patient Nathalie was looking for,” Ms. Chung recalls.

“Then, the discharge planning nurse, who was assigned to the JGH unit where the patient was located, ensured that the patient was informed and that everything was coordinated for the transfer.

“However, for the discharge to happen, the patient needed a COVID-19 test right away. So, the lab was contacted and a request was submitted for a rapid COVID-19 swab to be performed.

“In the end, the whole process of getting the patient out of the JGH and into Catherine Booth took only 3½ hours.

The many benefits of the Command Centre

In addition to ensuring that patients are promptly discharged from the JGH at the appropriate time, the Command Centre has been instrumental in streamlining the flow of in‑patients through the hospital, so that beds are available for new arrivals.

The C4 Command Centre has also been playing a key role reducing the number of psychiatric patients in the JGH Emergency Department by having them admitted to the hospital or transferred to an appropriate facility.

As well, it helped make vaccination against COVID-19 a largely hassle-free procedure.

“It’s something that could never have happened so quickly without the Command Centre. And now, it’s become part of our regular routine.”

Launched late last year and developed with substantial financial support from the JGH Foundation, the Command Centre is also known as C4, because its activities enable the hospital and the CIUSSS to be better able to Care, Communicate, Collaborate and Create.

The primary focus for Ms. Chung and Ms. Farley—and for their many team-mates, including the CIUSSS’s NSA lead, Mary Lattas—is the discharge process, as it applies to patients who are known as NSAs (niveau soins alternatif).

The term refers to those who have finished their hospital treatment and, as they await placement, they continue to occupy an acute-care bed longer than necessary. Often, these patients are waiting to be sent home or transferred to another facility, such as a rehabilitation hospital or a long-term care centre.

The Command Centre is also known as C4, because it enables the JGH and the CIUSSS to Care, Communicate, Collaborate and Create.

Not only is it inconvenient and irritating for patients to be kept waiting, it postpones the follow‑up care they may need to receive elsewhere, while delaying timely access to an acute-care bed for another patient who needs it.

When the Command Centre was established late last year, its first “mission” was to reduce the number of NSAs, as required by the Ministry of Health—and those efforts have been paying off.

In 2020, it was not uncommon for there to be more than 60 NSA patients at the JGH at any given time. Then the Command Centre shifted into high gear: During the first 3½ months of 2021, the number plunged as low as the 20s and is now generally in the low to mid-30s.

As a result, CIUSSS West-Central Montreal has become the only healthcare network in Quebec to organize its staff into a “teams of teams” to meet and often to improve upon the government’s target for NSA patients.

This outcome held special significance during the first few months of the year, when beds were needed for COVID-19 patients. Its importance continues today, as the number of sick patients in the JGH Emergency Department is again steadily rising on a regular basis.

A wider view of the Command Centre on the second floor of Pavilion B at the JGH.

The Command Centre’s base of operations is at the JGH on the second floor of Pavilion B. However, satellite centres have been established when the need arises. For instance, a Vaccination Command Centre at CLSC Côte-des-Neiges was crucial in making sure that inoculations rolled out smoothly across the healthcare network.

Lining the walls of the Command Centre are large video screens that display the latest information about the condition and status of patients, as well as other types of healthcare users at the JGH and elsewhere in the CIUSSS.

Representatives of several CIUSSS directorates—such as Nursing, Long-Term Care, Rehabilitation and the Support Program for the Autonomy of Seniors (SAPA)—also sit at computer terminals, where they work closely with managers to oversee the daily ebb and flow of patients.

Tight coordination across multiple CIUSSS directorates led to the launch of a special COVID-19 Geriatric Unit at the JGH, says Dr. Elise Levinoff, a geriatrician who helps manage patients’ care by working with the hospital’s physiotherapists, occupational therapists and other professionals.

“By making those beds available, we were able to treat patients who were already frail or had become frail because of the virus,” Dr. Levinoff explains. “I’m glad to say we managed to get a substantial number of them back to their baseline level of functioning, and back to their homes.”

“Quite a few of us had already been working together on the NSA situation before the Command Centre was launched,” says Ms. Lattas, who is the CIUSSS’s Associate Director of Rehabilitation and Multidisciplinary Services.

“Unfortunately, there was a limit to what we could do, until the Command Centre gave us access to constantly updated digital information about what was happening in our CIUSSS’s many sites.”

Another significant benefit of the Centre is the way it brings together key personnel for frequent meetings, and ensuring they are within easy reach of one another if circumstances change abruptly.

“The way we now communicate makes a huge difference,” says Leah Berger, Assistant to the Director of SAPA. “Even if a meeting isn’t scheduled anytime soon, all of us are ready to pick up the phone to call about any problem that requires an immediate answer.”

“Now that we’re getting live information, we’re able to map out today’s solutions while planning for the future.”

This has made it possible, for example, for Ms. Farley and for Home Care Coordinator Habiba Boutaleb to determine more precisely whether a patient can be discharged from his or her acute-care hospital bed, in order to receive services at home or to be seen as an out-patient.

“By meeting and solving problems together—especially with the help of our partners—we’ve been able to go a long way toward unblocking the system,” says Maxine Lithwick, Coordinator of Social Services and Professional Practice.

“Now that we’re getting live information, we’re able to map out today’s solutions while planning for the future.”

This cohesion—with its common set of CIUSSS-wide goals and strategies—has led to changes that might previously have been extremely difficult to implement.

Sharon O’Grady, a Rehabilitation Nursing Coordinator for the Catherine Booth and Richardson Hospitals and for UTRF Glenmount, notes that admissions to rehabilitation centres can now take place as early as 9:45 a.m., 75 minutes earlier than was previously the case. Consequently, patients can be transferred out of acute-care beds sooner.

This patient-centric improvement entailed a great deal of collaboration, Ms. O’Grady explains, since a major reorganization of workflow had to be made for staff in areas of Nursing, Rehabilitation, Housekeeping and Maintenance.

As well, she says, a dedicated discharge planning nurse has now been added to the staff at Catherine Booth and Richardson.

“We’re very much like a rowing team,” says Ms. Lattas. “We all have to row in the same direction and our technique is very important if we want to go faster.

“It’s the Command Centre that keep us from slowing down or, even worse, spinning in a circle. It helps us to be really aware of where we’re going and how we intend to get there.”