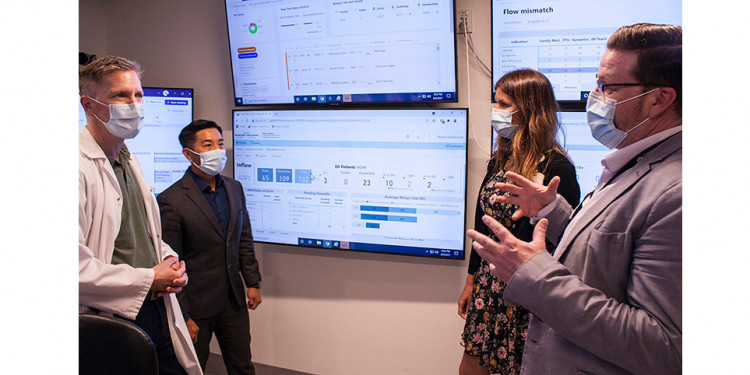 In the Command Centre at the JGH, the mental health care of patients and clients is discussed by (from left) Dr. Karl Looper, JGH Chief of Psychiatry; Tung Tran, Director of the Mental Health and Addiction Program for CIUSSS West-Central Montreal; Chloé Décarie-Drolet, Interim Associate to the Assistant Executive Director; and Mark Demaine, Coordinator of Specialized Services in the Adult Mental Health Continuum. (Click on any photo to enlarge it.)

Every four to six weeks, like clockwork, workers in mental health in CIUSSS West-Central Montreal gear up for a potential deluge, as numerous individuals stream into the JGH for psychiatric or psychological care.

Though anticipated, this periodic influx (often heaviest in the Emergency Department) strained the hospital’s limited resources until recently. But with the CIUSSS’s new Command Centre providing coordination and support since the beginning of the year, the response can now be more efficiently planned, in order to cushion the impact of the new arrivals. 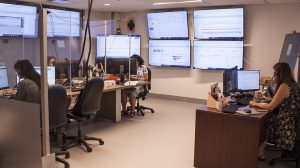 A wider view of the Command Centre on the second floor of Pavilion B at the JGH.

Equally important, those who require care are receiving it more promptly, either at the JGH or by being redirected to a facility with the expertise and resources that best meets that person’s particular needs.

Mark Demaine, who coordinates the CIUSSS’s Specialized Services in the Adult Mental Health Continuum, explains that the JGH is one of several Montreal hospitals that have agreed to take turns—each for a week at a time—tending to the mental health needs of homeless individuals from anywhere on the island.

As a result, every month or so, those who need care arrive at the JGH in substantial numbers. Before the Command Centre opened, knowing that these individuals would soon be on the way was no guarantee that everything would run smoothly, Mr. Demaine notes.

Now, however, JGH staff can rely on the Command Centre to adjust staffing more nimbly to respond to rapidly changing conditions. “It also enables us to collaborate more closely with our external partners,” says Chloé Décarie-Drolet, Interim Associate to the CIUSSS’s Assistant Executive Director.

“It means we can make sure that when we receive those clients, we can work with them or redirect them without their needing to be hospitalized.”

To help those with no fixed address, Mr. Demaine says, members of his team are also in regular contact with Connexion. Members of its staff in CIUSSS West-Central Montreal work with people at risk for homelessness by connecting them with the services they need in the neighbourhoods they tend to frequent.

As well, he adds, follow-up visits for some of these individuals are now being scheduled more promptly at the JGH to help reduce the likelihood of a return visit to the Emergency Department.

While this regular influx is only one aspect of the Command Centre’s varied activities, it’s indicative of the crucial role that the Centre has been playing in mental health.

The many benefits of the Command Centre

In addition to ensuring that patients receive prompt mental health care, the Command Centre has been instrumental in streamlining the flow of in‑patients through the hospital, so that beds are available for new arrivals.

The C4 Command Centre has also been playing a key role in preventing unnecessary delays in discharging patients from the hospital, thereby freeing up acute-care beds for those with immediate medical needs.

As well, it helped make vaccination against COVID-19,  a largely hassle-free procedure earlier this year, when the volume of those being vaccinated was substantial.

Launched late last year and developed with substantial financial support from the JGH Foundation, the Command Centre is also known as C4, because its activities enable the hospital and the CIUSSS to be better able to Care, Communicate, Collaborate and Create.

Lining the walls of the Command Centre are large video screens that display the latest information about the condition and status of patients, as well as other types of healthcare users at the JGH and elsewhere in the CIUSSS.

Representatives of several CIUSSS directorates—such as Nursing, Long-Term Care, Rehabilitation and the Support Program for the Autonomy of Seniors (SAPA)—also sit at computer terminals, where they work closely with managers to oversee the daily ebb and flow of patients.

The Command Centre’s base of operations is at the JGH on the second floor of Pavilion B. However, satellite centres have also been established when the need arises. For instance, a Vaccination Command Centre at CLSC Côte-des-Neiges was crucial last spring in making sure that inoculations rolled smoothly out across the healthcare network.

“Our most pressing priorities are to shorten the waiting list and to provide wider access to services.”

The Mental Health Directorate is now developing this sort of satellite to help plan and manage its own programs, says Tung Tran, Director of the CIUSSS’s Mental Health and Addiction Program.

Once established, the satellite—whose location has not yet been determined—will provide a detailed portrait of mental health activities by relying on up-to-date information about the CIUSSS’s programs (e.g., Geriatrics and Rehabilitation) and those in the community.

“Our most pressing priorities are to shorten the waiting list and to provide wider access to services,” says Mr. Tran. “A satellite of our own will allow us to be even more patient- and client-centred in managing where and how care is provided.”

“The satellite is needed, because the trajectories of patients in Psychiatry are distinct from those in other medical areas,” adds Dr. Karl Looper, JGH Chief of Psychiatry. “We also have our own network of mental health teams in the hospital and in the community.

“In general, whenever there’s a build-up of patients in the Emergency Department, we can turn to the Command Centre to analyze the entire system and not just what’s happening in Emergency.

“The Centre also guides us toward solutions that go beyond access to Emergency services or in-patient admissions. And now we’re hoping to go to the next level of planning and delivering care.”

A surge in the Emergency Department

A notable example of the usefulness of the Command Centre came last April, when the Emergency Department experienced a sudden surge of 18 patients who needed care for mental health problems.

In response, Mr. Tran and his colleagues worked with the Command Centre and with their own teams to draw up a contingency plan that quickly reduced the numbers. Khalid Mekouar, a Planning, Programming and Research Officer, played a key role in ensuring that a written version of the plan covered all of the key elements that were needed for appropriate care.

The strategy included freeing up JGH beds by discharging certain patients more rapidly, while ensuring that they still had proper support at home. As well, transfers were arranged for some patients who had been brought to the hospital by ambulance, even though they did not live in the area served by CIUSSS West-Central Montreal.

“There is an implicit agreement among all of us that the patient is the centre of our focus.

Within several days of the plan’s implementation, the number of mental health patients in the Emergency Department dropped from 18 to five, says Ms. Décarie-Drolet. Since then, whenever the total has risen past 10, the contingency plan has automatically kicked in—something that happened twice between early April and early June.

The advantage of the Command Centre, Mr. Demaine explains, is that it provides continually updated information about patients and clients throughout the CIUSSS, enabling staff to work together more closely and easily.

“The challenges are faced head-on,” he says. “Otherwise, there’s a danger we might act in an uncoordinated way, because we might not know where to turn when an obstacle arises.

“Involvement in the Command Centre is based on an implicit agreement among all of us that the patient is the centre of our focus. This means we can pull in any member of staff at a moment’s notice to be sure we have the right people to help us move forward.”

“Too often,” adds Ms. Décarie-Drolet, “you tend see only what ‘belongs’ to you—in other words, the specific area you’re responsible for. As a result, you don’t necessarily see what’s at stake for the entire organization.

“The Command Centre has changed all of that, since staff are gaining a much better understanding of what’s needed beyond ‘My patients’. Of course, your own patients do matter, but they’re also parts of a very large and complex puzzle that we’re getting much better at working with.”