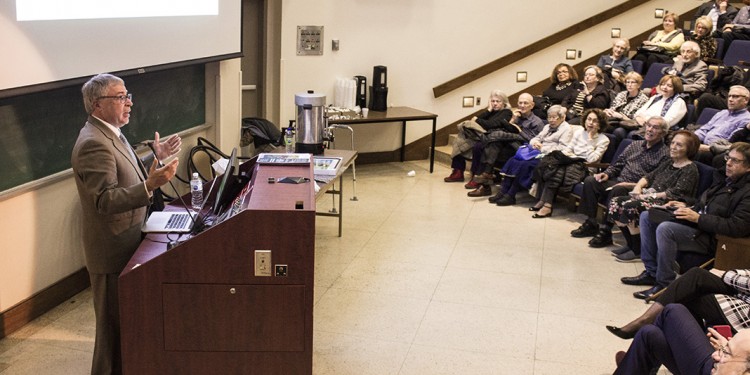 Many of the people who live past the age of 100 have not contracted any major diseases during their lifetime, or they have experienced much less severe forms of those illnesses, a leading international expert on aging has told an audience at the JGH.

Dr. Nir Barzilai said many of these long-lived individuals seem to have genetic or other inborn physiological defences which, if analyzed and replicated in drug form, could potentially increase the lifespan—or what Dr. Barzilai calls “the healthspan”—of people in general.

His research and upcoming clinical trials were the focus of the annual Goldie Raymer Memorial Lecture, which was presented on October 22 in the Block Amphitheatre and organized by the JGH Division of Geriatric Medicine.

The lecture series was established by Susan Raymer in memory of her mother, Goldie, who died in 2012 at the age of 97. The yearly talks are meant to increase awareness about the needs of the elderly, in order to help them stave off illness and provide them with a better quality of life in their final years.

Dr. Barzilai, Director of the Institute for Aging Research at the Albert Einstein College of Medicine in New York City, said he and his team are focusing on Metformin, a drug that has been shown to delay aging in worms, mice and rats, and is now ready for clinical trials in humans.

“Right now, pharmaceutical companies, venture capital companies and biotech companies are preparing us for the next attack on aging.”
The major benefits of testing Metformin include its inexpensiveness, its ready availability and the fact that its safety has been demonstrated for more than 60 years in the treatment of diabetes.

If Metformin lives up to its potential, it could be prescribed without delay, since it is already approved and in use, explained Dr. Barzilai, who is a Professor of Medicine (Endocrinology) and a Professor of Genetics. While the drug would not be a fountain of youth, it could be beneficial in helping to stave off disease in a manner that happens naturally in centenarians.

The clinical trial will be conducted in 14 centres in the United States and will involve about 3,000 people between the ages of 65 and 80. Dr. Barzilai said he is hoping to receive funding for a six-year study, but if Metformin performs as hoped, the results could be presented within four years.

He also emphasized that even if Metformin is shown to be effective in delaying aging, neither this drug nor any other that is approved for a similar purpose should be seen as a substitute for healthy lifestyle choices, such as exercising, eating a balanced diet and not smoking.

In answering questions from the audience, Dr. Barzilai noted that:

“When I entered the field, there was no hope,” Dr. Barzilai said. “We thought that aging just happens and there’s nothing we can do about it.

“But right now, pharmaceutical companies, venture capital companies and biotech companies are preparing us for the next attack on aging. I am telling you that help is on the way.”