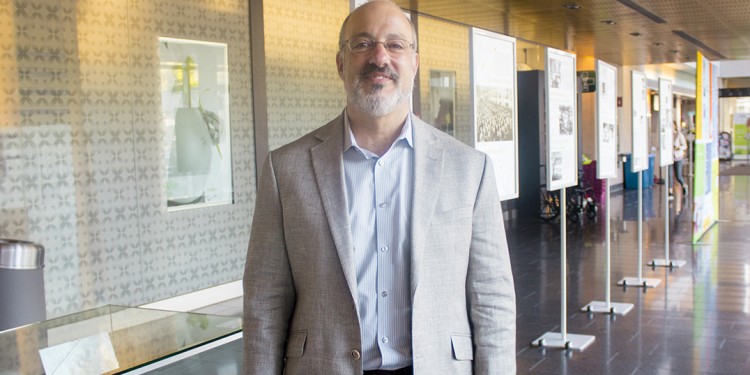 In the JGH lobby, Bram Freedman, the new President and CEO of the JGH Foundation, stands beside a display case containing archival materials about his grandfather, Dr. A. O. Freedman. On October 15, 1934, one week after the JGH officially opened, Dr. Freedman admitted the first patient to the hospital.

When Bram Freedman speaks about the family feeling that he experiences at the JGH, he’s echoing generations of praise for the hospital’s compassionate approach to care. But he’s also speaking literally.

As the new President and CEO of the JGH Foundation, Mr. Freedman says he is impressed, first and foremost, by “the strength of feeling that people have for the hospital and the Foundation.

On October 15, 1934, one week after the JGH officially opened, Dr. A. O. Freedman—grandfather of the Foundation’s new President and CEO, Bram Freedman—admitted the first patient to the hospital. According to materials in the JGH Archives, the married, 37-year-old woman (whose identifying information has been blacked out in the above photo) was born in Romania and had been living in Montreal for 18 years. She was admitted through the Department of Otolaryngology and was hospitalized for two days.

“It really does feel like a community, and people who are involved, whether as donors or volunteers, have a real sense of ownership. That’s pretty remarkable for a big public institution. I continue to be impressed every day by the sense of attachment that people have.”

On a more personal level, Mr. Freedman has now become the third generation of his family to make the JGH a key element in his career. His father, Dr. Samuel O. Freedman, O.C., C.Q., served from 1991 to 2000 as Director of Research for the Lady Davis Institute.

And his grandfather, Dr. A. O. Freedman, the hospital’s founding Chief of Otolaryngology, had the distinction of admitting the first patient to the JGH on October 15, 1934, one week after the hospital officially opened.

“I’ve always considered the hospital to be one of the jewels of the city,” he says. “To me as a patient, it feels different from other hospitals. There’s something about the way people are treated that makes it special—that patient-centred approach. And it doesn’t matter who you are or what your background is, the atmosphere is unique.”

Born in Montreal, Mr. Freedman earned his law degrees at McGill University and then launched his career in 1992 at Concordia University, first as Assistant Legal Counsel and later as Assistant Secretary General and General Counsel.

During the ’90s, he also began volunteering at local non-profit Jewish organizations, as well as those in the healthcare sector. With pride, he notes that he served as Chair of the Board of CLSC Metro before the age of 30.

“I’ve always considered the hospital to be one of the jewels of the city. There’s something about the way people are treated that makes it special—that patient-centred approach.”

From 2003 to 2008, Mr. Freedman worked at Federation CJA as Chief Operating Officer and Director of External Relations, positions that brought him into frequent contact with the provincial government. Through his interaction with the healthcare system, he also became involved with the Jewish Eldercare Centre, eventually joining its board and serving as its Chair.

Then came a return  to Concordia from 2008 until 2018, with Mr. Freedman serving in a number of senior roles, culminating in the position of Vice‑President of Advancement and External Relations. In that role from 2013 to 2018, he oversaw all fundraising and alumni-relations activities, including the launch of Concordia’s $250 million fund-raising campaign.

“I was not actually  looking for something new, because I was very happy with my job at Concordia, which was very stimulating,” he says. Nevertheless, he was intrigued by the notion of leading the JGH Foundation which, in the level of donations that it receives, is among Canada’s most successful hospital foundations.

“There were very few jobs that could have enticed me to leave Concordia, but this was one of them. I see it as one of the top professional positions, not just in the Jewish community, but in the fund-raising and philanthropic communities in general.”

Mr. Freedman says that he was also aware of the exemplary achievements of Myer Bick, who was recently named President Emeritus of the JGH Foundation after having led the organization since 2001. “Myer is a highly respected professional, and the thought of succeeding him was something that really appealed to me.

“What I admire most is the passion and commitment that Myer and his team have brought to the Foundation and the hospital. I’m hoping to build on their excellent work and explore new opportunities for growth.”

Although Mr. Freedman is still planning the details of his strategy, he says he hopes to add to the current momentum in appealing to donors beyond the Jewish community—in other words, the many people from a wide range of backgrounds who receive treatment and care at the JGH.

As well, he would like to attract younger individuals to become active in leading or supporting Foundation events—a challenge currently faced by many charities and similar non‑profit organizations.

“What’s clear,” Mr. Freedman says, “is that you need different kinds of events and engagement for different parts of the community, whether it’s by age, ethnicity, gender or other factors. The one-size-fits-all approach is not a sustainable long-term strategy, and exploring  new opportunities is something I’m really looking forward to.”

Don't let your backpack backstab you!