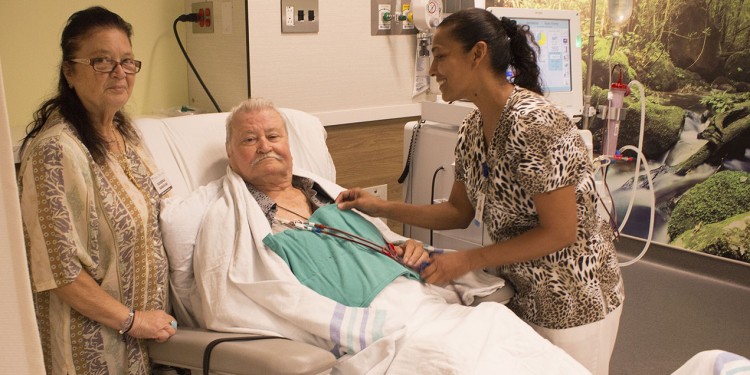 Greater privacy and comfort for patients in new treatment area

A large, modern and unified hemodialysis unit swings into operation at the Jewish General Hospital this fall, replacing the pair of cramped and outdated facilities that patients and staff have endured for years.

The number of hemodialysis stations remains unchanged at 37, says Dr. Mark Lipman, JGH Chief of Nephrology, but space has been set aside for an additional 10 stations that can accommodate up to 60 more patients. “We felt we had to plan for what we believe will be an inevitable need to expand,” he adds.

The launch of the hemodialysis unit in mid-September is the first phase of a two-part project that Dr. Lipman hopes will conclude in early 2017 with the entire Division of Nephrology relocating to the new space.

Even though funds have not yet been raised to cover the entire $8.8 million construction cost, the launch was given a green light because of the urgent need to move out of the old facilities, which Dr. Lipman describes as “antiquated and dilapidated.” The province has contributed $2.8 million, leaving $6 million to come from private donors. A number of generous gifts have already been made through the JGH Foundation, but about $3.5 million in private funds must still be raised.

Here are some of the most notable improvements in the new hemodialysis unit in the Sandra and Steven Mintz Nephrology Centre:

For more information or to donate to this vital initiative, please contact the JGH Foundation online or call 514-340-8251.

The original hemodialysis unit, with 18 stations, opened on the second floor of Pavilion G in 1991, followed in 2007 by a 12-station unit on the ground floor of Pavilion H that later grew to 19 stations. Together, they can serve as many as 222 patients; the actual number being treated as of mid-August was 218. In total, the new Nephrology Centre covers roughly 28,000 square feet, nearly twice the area of all of the older facilities in both locations.

The need for comfort and convenience is essential, says Dr. Lipman, because the typical hemodialysis patient must visit the hospital for three four-hour treatments per week. This means that staffing schedules must be carefully planned to allow for a morning, afternoon and evening shift every day, Monday through Saturday. The hemodialysis unit is closed on Sundays, but remains open at all other times, including statutory holidays. If members of staff make an exception and decide to close on a certain day, such as Christmas Day, the unit must be opened on Sunday of that week to make up the missed sessions.

“This upgrade has been a long time coming and it’s greatly needed,” says Dr. Lipman. “I’m thrilled that we’re going to be able to give patients the services they require in an environment that will satisfy their medical needs, and give them the comfort and emotional support that are crucial to their treatment.”

Donor support is essential to the JGH’s evolution