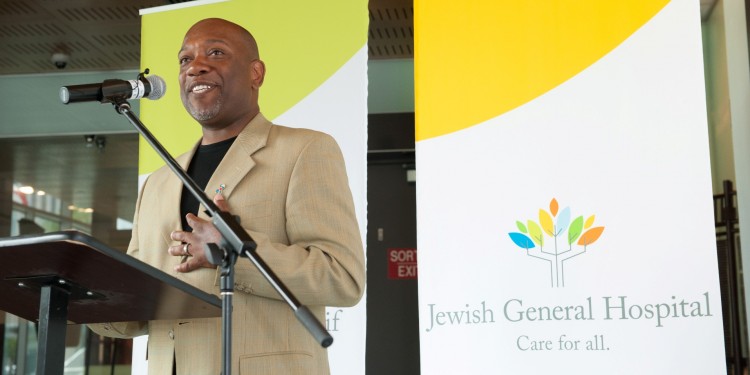 At the launch of the Respect campaign, George Mullings describes how the experience of a hospitalized family member was enhanced by the respect shown by members of JGH staff.

For four months in late 2014 and early 2015, George Mullings came away amazed after every visit to the JGH. He and members of his family were looking in on his hospitalized mother-in-law, and they were continually surprised—and grateful—that the respect of staff enabled her to maintain her dignity and good spirits.

“The energy from everyone was absolutely amazing,” Mr. Mullings said at the launch of the Respect campaign, an initiative of the Humanization of Care Committee, in collaboration with the Users Committee.

A bookmark, developed by the Humanization of Care Committee and sponsored by the Users Committee, spells out the elements of the Respect initiative.

Speaking on May 27 in the hospital’s main lobby, Mr. Mullings explained that respect appeared to provide the framework not only for the hospital’s approach to care, but its relationship with members of his family. This became evident, he said, in the warmth and understanding that staff showed to his mother-in-law, as well as their attentiveness and helpfulness to her relatives. “We were always confident that she would be well looked after,” he added.

Dr. Lawrence Rosenberg, President and CEO of the Health and Social Services University Centre for West-Central Montreal, noted that “respect is not a one-way street. This is why other patient-centred initiatives of the JGH, such as the Bill of Rights and the Speak Up campaign, also explain what patients must do to show respect for staff, and how members of staff must respect one another.”

He also congratulated the two committees, whose partnership “means that the Respect campaign will benefit from the insight of organizers who are dedicated to making the patient experience as smooth, humane and comfortable as possible.”

Dr. Rosenberg reminded staff that respect is prominently mentioned in the JGH’s mission statement, because “at its heart, almost every aspect of improving the patient experience comes down to a single key point: respect. Respect for patients’ dignity. Respect for their privacy. Respect for their concerns about pain, fear, confusion or uncertainty.

“Our wish is to be of real use to patients by relieving their pain and overcoming their illnesses. But we can’t hope to achieve this goal, unless we truly respect their personality, empathize with them and earn their trust.”