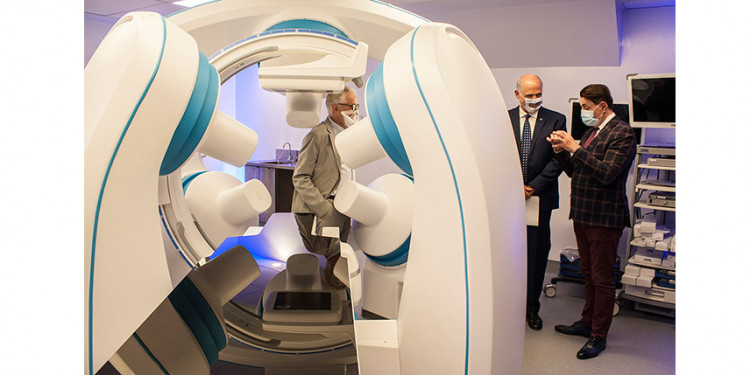 During a tour of a newly inaugurated JGH lab where clinical trials will be held for a promising cancer treatment, Pierre Fitzgibbon (second from right), Minister of Economy and Innovation, is briefed about the technology by Michel Gareau (right), Founder and President of Starpax Medical, and by Dr. Gerald Batist, Director of the Segal Cancer Centre. (Click this or any photo to enlarge it.)

Clinical trials of a potentially revolutionary cancer-fighting treatment—the only one of its kind in the world—are expected to begin by the end the year or in early 2023 in a newly constructed laboratory that has been launched at the JGH. 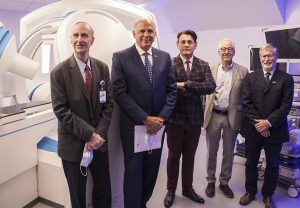 Following a news conference at the hospital on June 20, Pierre Fitzgibbon, Minister of Economy and Innovation, was among the visitors who toured the new facility in the hospital’s Division of Radiation Oncology, where the unique procedure will be tested.

In a process developed in collaboration with Starpax Biopharma of Montreal, specialized bacteria (known as MagnetodronesTM) are laden with anti-cancer medication and are injected directly into the tumour.

Since these Magnetodrones are sensitive to magnetism, their movement can be controlled with a magnetic field generated by Starpax’s PolarTrakTM device. The patient lies on a flat surface in the machine at the focal point of a large ring whose interior is equipped with six cylindrical components.

The cylinders are pointed at the site of the patient’s tumour and, working in unison, they generate the magnetic field that guides the Magnetodrones to a precise location in the tumour. In addition to keeping the Magnetodrones in place, the PolarTrak displays their position in 3D.

The Magnetodrones then release their anti-cancer materials into the tumour, saturating a hypoxic (low-oxygen) spot that would have been difficult to reach with conventional forms of treatment. 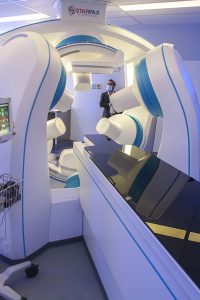 Since this type of therapy keeps the medication from circulating in the bloodstream, the patient is spared extensive exposure to chemicals or radiation whose side-effects could be physically draining and psychologically debilitating.

Participants in the trial are expected to be chosen later this year. The first studies will focus on six types of cancer: pancreatic, prostate, head and neck, rectal, vulval, and skin metastases, including breast cancer recurrence.

Once clinical trials have concluded, the treatment would have to be approved by the relevant health agencies before becoming available for general use. Starpax and the JGH will make an announcement soon to begin recruiting patients among members of the public.

The Starpax initiative has been developed through a multi-year collaboration among the provincial government, the JGH (the Segal Cancer Centre, the Lady Davis Institute and the JGH Foundation), Polytechnique Montréal, the Programme québécois de cancérologie and private partners including Starpax Biopharma and the TransMedTech Institute of Montreal.

At the news conference, Mr. Fitzgibbon announced that the government is contributing up to $7 million toward the $8.7 million project, with funds being used to cover the cost of constructing and equipping the PolarTrak room. The remainder is being borne by the JGH Foundation. 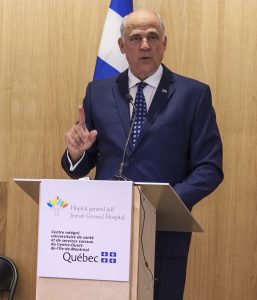 Pierre Fitzgibbon at the news conference to unveil the new JGH lab where the Starpax technology will be tested.

“The potential repercussions of the Jewish General Hospital’s project demonstrate the importance of giving the necessary tools to our businesses and research centres,” Mr. Fitzgibbon said.

Dr. Lawrence Rosenberg, President and CEO of CIUSSS West-Central Montreal (in which the JGH plays a pivotal role), called the clinical trial “a major offensive in our battle against cancer,” which is “unlike anything that has been attempted anywhere in the world.”

He noted that the project “fits squarely into our CIUSSS’s overall strategy of placing an ever-increasing emphasis on using and, more importantly, actively developing new forms of technology to meet the needs of patients.”

In addition, Dr. Rosenberg said, since the eventual treatment will be customized to meet the medical requirements of each patient, “this project is consistent with our CIUSSS’s approach of making the needs of patients and healthcare users our top priority.”

The JGH and the CIUSSS’s other facilities have a history of “doing more than offering health care and social services to their own clientele,” he added. “They chose to play a larger and more ambitious role as innovators, in order to be of benefit to people throughout Montreal, Quebec and beyond. 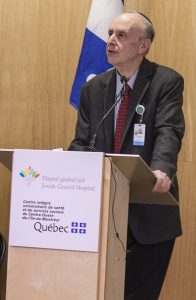 Dr. Lawrence Rosenberg at the news conference to inaugurate the JGH lab where clinical trials will be held, using Starpax technology.

“That philosophy has carried over into our CIUSSS. Our goal is to help all those, no matter where they may be, to overcome cancer as effectively as possible, while making the treatment itself more tolerable.”

The need for new and more effective cancer treatments has become even more urgent due to the COVID-19 pandemic, which caused lengthy delays in diagnosing the disease and initiating treatment, Dr. Gerald Batist, Director of the Segal Cancer Centre, told the audience.

For this reason, he said, collaboration is essential among various public-sector institutions and private-sector companies. In the present case, this has led to “a perfect interlocking of engineering, biology and medicine.”

Dr. Batist explained later in an interview that during the first phase of the clinical trial, researchers will be working with cancer patients whose tumours are advanced and not easily treated by conventional means, but have not yet spread throughout the body.

Of particular interest, he said, will be determining the safety of the treatment, its potential side-effects, and how well the therapy works on a variety of specific kinds of cancers.

“Just as we turned to science and innovation to overcome the pandemic, that’s what we’re going to have to do in dealing with the tsunami of cancer cases that are a consequence of that pandemic,” Dr. Batist said.