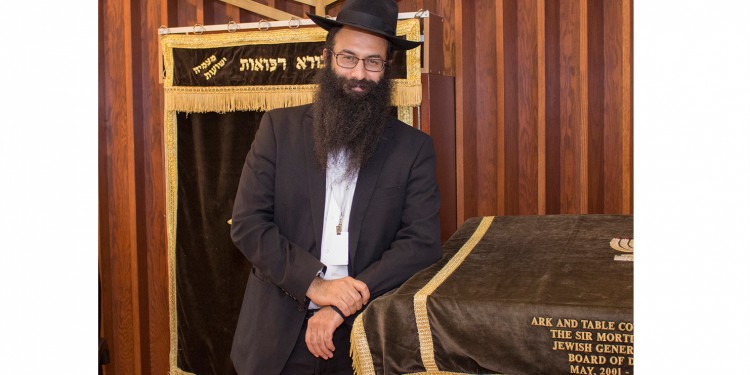 For Rabbi Nissim Barak Hetsroni, it’s as if a circle has been closed. Earlier in life, he’d been gearing up for a career in medicine, only to shift unexpectedly into the rabbinate, counselling and Jewish education. Now, to his delight, he finds that his two paths have converged, with his recent appointment as JGH Chaplain and Spiritual Advisor.

“It’s truly amazing where life can take you,” says the 38-year-old rabbi, who joined the JGH in late July, under the supervision of Joanne Laing (Chief of Volunteer and Pastoral Services) within the Directorate of Quality, Evaluation, Performance, Ethics and Archives of CIUSSS West-Central Montreal.

“I have a unique opportunity to be of service to people who need help, and to work in partnership with them,” explains Rabbi Hetsroni. “The assistance that I provide is part of the overall support by a team of professionals to provide care of superior quality and the best possible patient experience.”

Rabbi Hetsroni’s personal affiliation is with Chabad, a movement of Hassidic Orthodox Judaism that emphasizes outreach, education and social support, as well as close adherence to Jewish laws and customs. Drawing on that tradition, he hopes to use kindness and spiritual comfort to brighten the lives of patients of all backgrounds.

“It’s important to make the most of each and every minute, because each moment is precious in a person’s life,” he says. “If you use time wisely, its effects can last forever.”

Born in Petah Tikva in Israel, Rabbi Hetsroni served nearly 3½ years in the Israel Defense Forces. After his discharge in 2001, he nurtured his budding interest in health care by taking a year to earn a diploma as a provider of therapy to individuals who had suffered sports-related accidents. He also continued to develop his participation in extreme sports, marathons and triathlons.

With his sights set on a career in health care, Rabbi Hetsroni was accepted in 2002 into a special program for international students in the University of Quebec at Trois-Rivières. His plan was to begin with training in chiropractics, which would serve as a springboard to medical school.

However, only a few weeks into his first semester, he took what was intended to be a brief vacation to visit his two brothers, who had been living in Montreal for some time and were affiliated with Chabad. Not long afterward, he left university, moved to Montreal and began his rabbinic studies.

After being ordained in 2004, Rabbi Hetsroni began his long association with Montreal’s MADA Community Centre, which provides food and other basic necessities to people in need.

Jewish prayer services in the chapel

The chapel (synagogue) on the sixth floor of Pavilion B welcomes staff, patients and visitors of all faiths.

The Jewish afternoon prayer service is conducted on weekdays at 1:45. The service to welcome the Sabbath begins at sundown on Fridays, and the Sabbath morning service starts at 10:15.

In the coming months, more information about various aspects of the chaplaincy will be added to the Pastoral Services page on the JGH website.

At the same time, he provided spiritual guidance to at-risk teenagers of all backgrounds, as well as earning his certification to be a mohel (practitioner of ritual circumcision) and a shochet (slaughterer of cattle and poultry according to Jewish law). He is currently pursuing a degree in psychology.

About three years ago, when his family moved into the neighborhood near the JGH, Rabbi Hetsroni began his regular contact with the hospital, where he, his wife and his children volunteered to visit patients. “Since then, I’ve come to appreciate how great a privilege it is to work with such incredible leaders, partners, doctors and healthcare professionals. This hospital has a name that speaks for itself.”

As a newcomer, Rabbi Hetsroni realizes it may take a while for staff to recognize him and become accustomed to working with him. But he also recalls being approached not long ago by a woman who had met him previously and was now in the hospital to visit a patient. “She said, ‘I don’t remember your name, but I do remember your long, long beard,’” he says with a hearty laugh. “So I’m hoping it won’t be too hard for people to remember me.

“The most important thing is for them to see the chaplain as a real presence in the hospital, and always with a smile. That smile is not only part of outreach, it’s a symbol of respect throughout our CIUSSS. On a personal basis, it’s remarkably contagious and it can make such an enormous difference in patients’ lives.”

Dr. Lawrence Rosenberg and his family dedicate a Torah scroll to the JGH