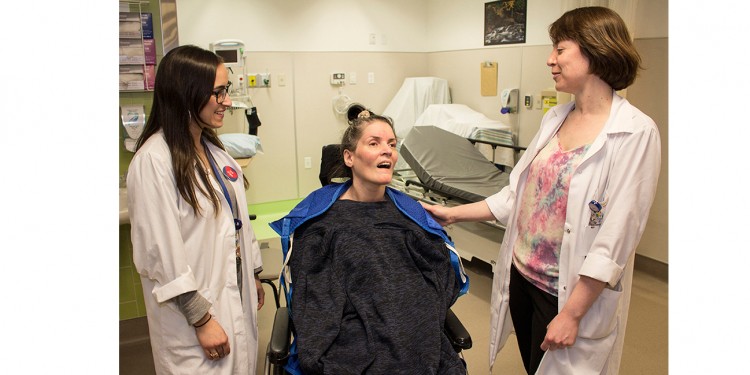 Before being discharged from the JGH Medical Day Hospital, Helen receives advice and encouragement from Kathryn Baldwin (right), a Discharge Planning Nurse, and from Occupational Therapist Vanessa Fedida.

Patients in several units at the JGH are now able to leave the hospital earlier, thanks to an innovative, inter-disciplinary project that has significantly streamlined the discharge process.

This means patients can return home or be transferred elsewhere—for example, to a rehabilitation hospital or an intermediate residence—at the appropriate point in their recovery, and not remain at the JGH any longer than necessary. As a result, beds become available sooner to accommodate new patients, and optimal use is made of healthcare funding.

Statistics compiled by Isabelle Aumont, Chief of Information Management, show that the average patient who returned home from one of the JGH Internal Medicine Units in December 2017 had spent 10 days in that unit—down substantially from the 13.7 days spent by patients in that unit in December 2016.

Members of the inter-discliplinary team that redesigned the discharge process at the JGH.

The positive results were achieved by implementing a variety of initiatives, including the creation of an inter-disciplinary lead team that redesigned the discharge process under the co-leadership of Mary Lattas (Associate Director of Multidisciplinary Services) and André Poitras (Associate Nursing Director).

This team also integrated best practices from the Advisory Board, a global research, technology and consulting firm that helps hospitals and networks improve the quality and efficiency of patient care. CIUSSS West-Central Montreal, to which the JGH belongs, is a member of the Advisory Board, which is based in Washington, D.C.

In addition, significant progress has been recorded elsewhere in the hospital. The following figures compare the average length of hospital stays for patients who returned home in December 2017 and those who went home the previous February:

Ms. Lattas notes that hospital stays are also shorter among patients who are transferred from the JGH to other healthcare facilities.

She adds that in some units, the average length of stay may sometimes increase, owing to the types and severity of the illnesses that are treated. Nevertheless, she says, the general trend is toward shorter stays.

So strong were the results that Ms. Lattas says the Advisory Board encouraged the JGH to share its figures with other healthcare organizations. This led to a webinar in February with Fraser Health of British Columbia, the Ottawa Hospital, and the Ottawa-area Queensway-Carleton Hospital.

Even though the changes primarily affect the flow of patients within the JGH, the project is creating a ripple effect throughout CIUSSS West-Central Montreal by improving the continuum of care between the hospital and the other healthcare facilities in the network.

“Now if a bottleneck appears, it’s managed, instead of the therapist or nurse having to leave the bedside and go off to call a CLSC or a rehab facility or a doctor, or to ask a lab why a test hasn’t been performed.”

The improvements were achieved mainly by revising and restructuring the roles and responsibilities of certain nurses and allied health professionals, such as the Assistant Chief of Physiotherapy, the Coordinator of Occupational Therapy and the Coordinators of Social Services, Ms. Lattas says.

Maxine Lithwick, Coordinator of Social Services and Professional Practice, explains that the project “has improved the whole trajectory of care, starting at admission. For example, instead of finding out a day or two before a patient’s discharge that we should be considering a transfer to a rehabilitation facility, this option is discussed much earlier, so that the right plan is in place well in advance of discharge.”

Under the new arrangement, each patient is assigned two Discharge Leads—one nurse and one allied professional—who work closely with the other professionals in the patient’s healthcare team, says Suzette Chung, a Nurse Discharge Planning Coordinator. Among the duties of the Discharge Leads is to identify any barriers, systemic problems or delays in processing that might interfere with the smooth delivery of the patient’s care and his/her timely discharge.

Ms. Chung says additional support comes from the Patient Flow Coordinator, Maria Kozma, who takes a wide-angle view of the needs of numerous patients, and then helps to eliminate or minimize any obstacles or bottlenecks in the system that might unnecessarily lengthen their hospital stay.

“Now if a bottleneck appears, it’s managed for them, instead of the therapist or nurse having to leave the bedside and go off to call a CLSC or a rehab facility or a doctor, or to ask a lab why a test hasn’t been performed.”

“Having the various network members sitting around the table promotes communication and breaks down silos,” Ms. Besner concludes. “It creates a better understanding of what each member of staff is doing and, ultimately, a clearer idea of what the patient needs at every step in the continuum of care.”