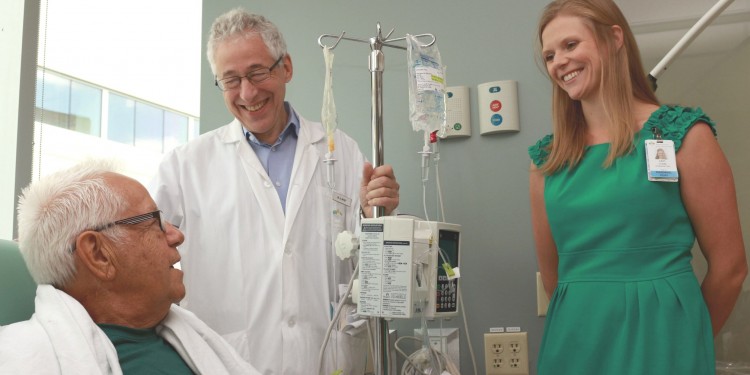 During his chemotherapy at the Segal Cancer Centre in pre-COVID times, Paul Grégoire chats with Dr. Gerald Batist, Director of the Centre, and Erin Cook, who is now Co-Director of Operations and Clinical Administrative Coordinator.

A new electronic scheduler that manages appointments has dramatically cut the time that patients wait before receiving their first chemotherapy session in the Segal Cancer Centre at the JGH. Use of the scheduling tool—a central feature of the Endovault software that manages the Centre’s health records—has led to a 50-per-cent reduction in the time between a patient’s visit to the doctor and the first session of chemotherapy.

“Despite our best efforts, almost 80 per cent of our patients used to wait more than 30 minutes for chemotherapy,” says Dr. Gerald Batist, Director of the Segal Cancer Centre. “With our new system, at least half of them receive their treatments within 30 minutes of check-in, and that figure continues to improve.”

Scheduling will soon be further enhanced by the addition of functions to provide patients with appointments by email or text message. “Patients will be able to choose for themselves the available appointment time that best suits them,” exlpains Pierrot Mbayo, Project Manager in Information Technology at the JGH.

The improvements emerged from patient satisfaction surveys conducted across the McGill University network by the Rossy Cancer Network, of which the JGH is a founding member. The time spent waiting for treatment was regularly cited by patients as one of their most pressing concerns. The Rossy Cancer Network was established to focus on ensuring high-quality care and continuous, evidence-based improvements.

Endovault software, developed by Endosoft, is used in over 700 medical institutions worldwide. However, its customization in an oncology setting is being pioneered in partnership with the Segal Cancer Centre and the JGH’s IT Department. It is used by 80 per cent of physicians in the Centre, which is expected to be paperless and chartless—to further reduce costs and improve efficiency—by the end of 2015.