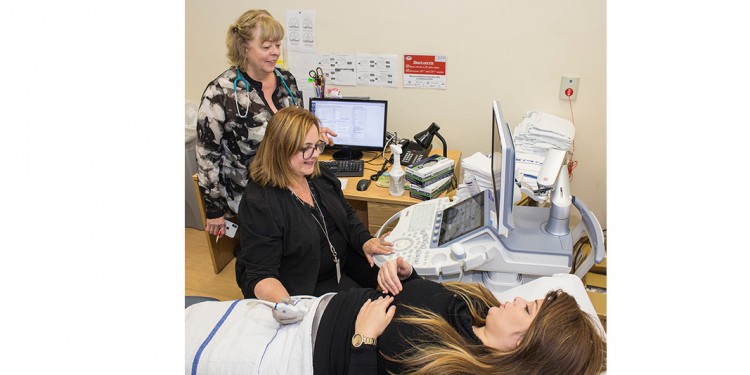 To get a sense of how far Obstetrical Ultrasound has progressed at the JGH, consider this: As recently as the 1980s, the service was part of the Department of Radiology, but now members of its staff train radiology residents how to conduct obstetrical ultrasound scans.

Today, as the service marks its 30th anniversary, it performs about 13,000 scans on at least 3,900 women a year for various reasons, including determining the viability of a pregnancy and whether any abnormalities may be present in the fetus.

“We’ve acquired a reputation for expertise and for having the best technicians in town—and that isn’t my opinion alone,” says Dr. Louise Miner, Director of Professional Services for CIUSSS West-Central Montreal, who remains active as an obstetrician-gynecologist in Obstetrical Ultrasound.

“The patients are experiencing a special and happy moment in their lives,” says Demi Papapanagioutou, Chief of Obstetrical Ultrasound Services, whose supervisory responsibilities also include anesthesia, general ultrasound and mammography services at the JGH.

“Obstetrical ultrasound has come to play an important role in obstetrics since its introduction,” Ms. Papapanagioutou explains. “Through the years, advancements in ultrasound techniques have led to improvements in pregnancy outcomes. Our team has exceptional expertise, with combined experience of close to 75 years.”

Until the early 1970s, JGH patients who needed an ultrasound scan, particularly pregnant women, were sent to other hospitals. Ultrasound finally arrived in 1974 and was used in more than 1,000 cases of all types in its first few months.

“Over the years, the field has become more complex. The equipment is much more sophisticated and there are a lot more requirements now in terms of what is considered essential imaging, even for a routine scan.”

Dr. Miner says that until 1989, obstetrical ultrasound at the JGH was handled by a pair of radiologists. Two obstetricians, who performed procedures such as amniocentesis, also scanned patients whose condition had been flagged as possibly abnormal. However, by the late 1980s, interest was growing—especially at McGill University—in having obstetricians placed in charge of the scans.

Thus, after completing her obstetrical residency, Dr. Miner undertook six months of specialized training in ultrasound, with the goal of helping to establish an Obstetrical Ultrasound service outside Radiology at the JGH.

Along with Radiology Technologists Linda Larin and Francene Bouvier who specialized in ultrasound, plus Randy Kauffman who provided administrative support, Dr. Miner was instrumental in founding the hospital’s Obstetrical Ultrasound Department, whose first Chief was Dr. Emily Hamilton.

The service spent its first 20 years in the basement of Pavilion B in less than ideal circumstances: privacy was minimal, and patients had to endure stomach-turning odours wafting through the corridor from non-patient care areas nearby.

Since 2009, Obstetrical Ultrasound has enjoyed a much more pleasant environment in the Department of Obstetrics and Gynecology on the third floor of Pavilion H.

Strictly speaking, Dr. Miner says, radiologists could still be involved in the simpler cases. “However, being able to see all of the normal scans gives us a wider perspective and much sharper experience in also looking at the abnormal ones.

“Over the years, the field has become more complex. The equipment is much more sophisticated and there are a lot more requirements now in terms of what is considered essential imaging, even for a routine scan.”

Moving Obstetrical Ultrasound from Radiology to Obstetrics is becoming more common around the world, says Dr. Miner. This is the case locally at St. Mary’s Hospital and the Royal Victoria Hospital, while in most of the rest of Quebec, radiologists still conduct the scans.

“Whether it’s day-to-day work, the training of residents, upgrading skills or attending conferences, we take great satisfaction in our work,” she says. “Everything that we do, we do with pride.”