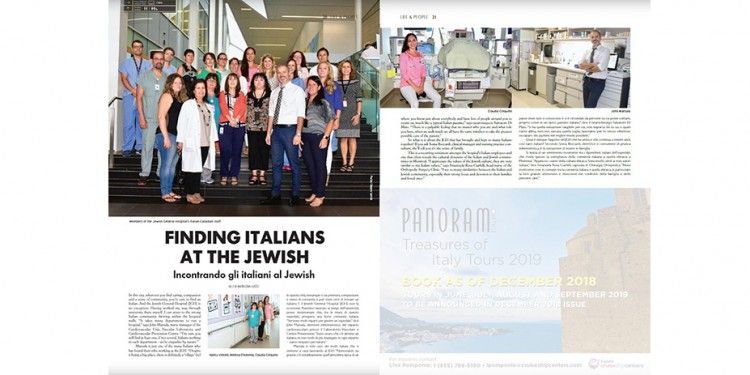 It’s only at the end of the workday that most people come home to their family. But for some employees at the JGH, their colleagues are like relatives—and among Italian staff at the hospital, this statement rings especially true.

In the October-November issue of the Italian-Canadian magazine Panoram Italia, this sense of family has come to light in a four-page spread, in which staff describe what working at the JGH and being Italian means to them.

Mr. Marsala pitched the story to the publication, because “I felt that the public should know about the work we do. When patients come here, they’re getting safe, competent care.”

The article has received extremely positive feedback, says Marilena Lucci, Managing Editor of Panoram Italia, who penned the story. “We were so glad to have been given so much space for this piece, as we got to include many photos of staff. Other JGH staff have seen it and commented, ‘I want to be included, too!’”

Ms. Lucci has her own connection to the JGH, having worked part-time in administration in Oncology throughout university. “I saw first-hand the strong Italian community and the family spirit,” she says. “A story about it had always been at the back of my mind.”

Mr. Marsala got the ball rolling by getting in touch with the Italian colleagues he knew, and then he encouraged them to contact other Italian acquaintances to take part.

“Mr. Marsala was instrumental in connecting me with people for quotes and photos,” says Ms. Lucci.

“The article is about all of us at the JGH and what we do,” he says. “Working in a hospital is not easy, since it can be very stressful.” However, cultural similarities among staff and patients can make things easier.

“When you have a unilingual Italian patient, for example, and you can help translate or communicate with them, they appreciate it,” Mr. Marsala explains. “It relieves some of the pressure of being in a hospital, because there’s someone they can rely on.”

Free copies of Panoram Italia are available in the Magazine Nook, in the corridor between the main JGH entrance and Pavilion G.