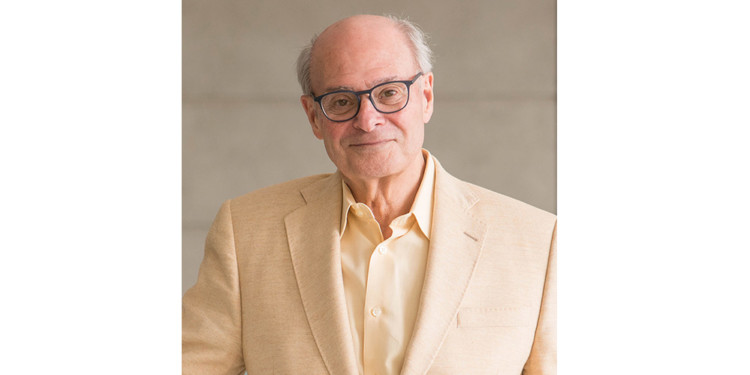 Myer Bick, former President and CEO of the JGH Foundation, has been appointed to the Order of Canada.

In 2018, shortly after announcing his retirement as President and CEO of the JGH Foundation, Myer Bick was taking one of his customary, fast-paced walks down the hospital’s main corridor, when he heard someone calling from behind: “Myer, slow down!” 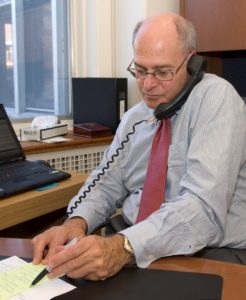 Myer Bick at his desk before his retirement from the JGH Foundation.

Turning, Mr. Bick saw that he had been hailed by Dr. David Langleben, a veteran cardiologist. Approaching him, Mr. Bick asked what was so urgent. “You should walk more slowly,” Dr. Langleben replied. “That way, you can get a better look at how much you’ve accomplished here.”

If you followed Dr. Langleben’s advice and took a stroll through the JGH, you’d find the figurative fingerprints of Mr. Bick and his fund-raising team on everything from entire wings (the Segal Cancer Centre, Pavilion K) to a great number of extensively renovated clinics and in‑patient facilities (Psychiatry, Dialysis).

That remarkable effort is largely what accounts for Mr. Bick’s recent appointment to the Order of Canada. While the honour recognizes his lifetime of excellence in business, non‑profit organizations and community service, Mr. Bick’s nearly two decades as head of the Foundation is widely viewed as his enduring legacy.

“I’m thrilled and honoured,” says Mr. Bick. “However, I have to add that the success I’ve enjoyed over the years has had a great deal to do with the people I’ve worked with and met. They’ve helped me and taught me so much. They became part of my life and all of them have a share in this award.”

Perhaps most surprising about the commendation is the fact that Mr. Bick had virtually no experience as a fund-raiser before joining the Foundation in 2001. Among his various roles were Vice-President of Management and Operations at Canpro Investments Limited; President and Managing Partner of Spatches Inc.; President of Carodan Consultants International; National Executive Director of the Canada Israel Committee; and Chairman of the Montreal Executive Committee of Canadian Friends of Tel Aviv University. 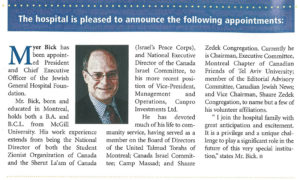 Myer Bick’s appointment as President and CEO of the JGH Foundation was noted in the spring 2001 issue of JGH News. (Click on photo to enlarge.)

Nevertheless, friends and colleagues agree that what mattered most was—and still is—Mr. Bick’s unique ability to connect with people on a warm, direct and sincere basis, without resorting to hard‑sell tactics.

As Mr. Bick prepared to join the Foundation, his lack of hands-on familiarity with fund-raising was well known to Jonathan Wener, who was then President of the JGH Board of Directors. Today, with self-deprecating humour, Mr. Bick recalls why he was nevertheless welcomed to the hospital.

“Then, on my first day working in the hospital, we were in the board room for a meeting and Jon wrote in big letters on the blackboard, ‘Think big or go home.’ Well, there was no way I was going home.”

Mr. Bick’s ability to think big soon became evident, as he set a $200 million goal—quadruple the previous objective—for the Foundation’s first fund-raising campaign under his leadership. Not only was this objective eventually met and exceeded, it segued into the next campaign, whose goal of $250 million was also achieved.

These sums are of crucial importance, because funds raised by the Foundation have been used for purposes as diverse as amenities for patients (modern hospital beds), equipment for clinicians (the da Vinci surgical robots) and the salaries of outstanding researchers who have been recruited to the Lady Davis Institute at the JGH. 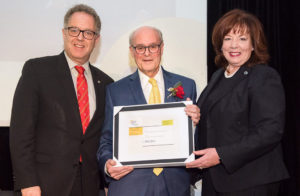 In the case of Pavilion K, the cost of construction was borne by the government. But it was up to the Foundation to raise the money to build the parking garage beneath the new wing, as well as outfitting all of the new rooms with furniture and other equipment.

Many projects relied more substantially on private support, notably the Segal Cancer Centre, whose creation and launch in 2006 were largely due to a major donation by philanthropist Alvin Segal.

Working closely with Mr. Segal, Mr. Bick became a catalyst in making it possible for all of the hospital’s cancer-related services to be centralized, significantly modernized and more closely connected to research conducted by the Lady Davis Institute.

For this reason, Larry Sidel, Executive Vice-President of the Foundation, still considers Mr. Bick’s involvement in the Segal Cancer Centre to be his most remrkable achievement.

“When the Centre opened, it was like stepping into another world, compared to what had existed previously,” says Mr. Sidel, who began working with Mr. Bick in 2002. “It was a true healing environment and Myer deserves full credit for all of the work that he did.”

Mr. Sidel adds that Mr. Bick’s deft touch was also present in his letters and his written proposals, which hit just the right note among people of all backgrounds. “We challenged each other in many ways,” Mr. Sidel notes, “and that’s because we earned each other’s trust and we trusted each other’s judgment. That’s the way Myer is with everyone.”

“Myer’s passion and knowledge of the hospital are legendary. He is a true ‘people person’.”

Other colleagues are similarly effusive in their praise. Bram Freedman, Mr. Bick’s successor as President and CEO of the Foundation, calls the honour “extremely well-deserved. Myer spent almost 20 years living and breathing the JGH and he remains engaged with us even in retirement.

“His passion and knowledge of the hospital, as well as his incredible story-telling skills, are legendary. Myer is a true ‘people person’ and we are all extremely grateful for the solid foundation that he has left us.”

Harvey Levenson, Chair of the Foundation’s Board of Directors, says he has been “in fund-raising for nearly 30 years and I’ve worked with some wonderful professionals. But few of them have been as engaging, involved and insightful as Myer. He’s as good as—or better than—anyone I’ve ever met.”

That assessment of Mr. Bick’s abilities was officially endorsed in 2017 when he received the Outstanding Career in Philanthropy Award from the Quebec branch of the Association of Fundraising Professionals. At the time, Marc Weinstein, Vice-Principal of University Advancement at McGill University, said Mr. Bick “is considered, with good reason, one of the doyens of our philanthropic community.”

Mr. Bick’s great gift, says Mr. Levenson, is that “he knows not only how to talk to people, but how to truly listen to them and touch them—and not just in a fund-raising capacity. He has genuine heart and he’s a master of his trade.” 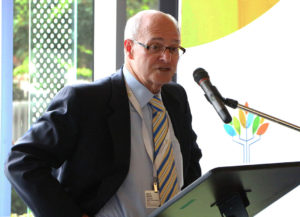 Before retiring, Myer Bick spoke to staff in the public lounge near the main entrance to the hospital.

“It’s truly gratifying to see Myer receiving such a richly deserved honour,” says Dr. Lawrence Rosenberg, President and CEO of CIUSSS West-Central Montreal. “I can’t imagine what the JGH would look like today, if not for the determination of Myer and his team in raising substantial funds for the numerous departments and services that needed to keep improving patient care.

“Myer’s voice is also one of calmness, reassurance and stability. When our CIUSSS came into existence in 2015, Myer was instrumental in ensuring that its role was well understood by donors and the public, and that crucial support for the Foundation remained strong.

“In the process, Myer helped the JGH retain and preserve its unique identity, even as the hospital began to forge links with the other facilities in our healthcare network.”

Although Mr. Bick is retired, he remains in steady demand as an advisor to several community and non-profit organizations, including the JGH Foundation. Continuing to be of service to the hospital is a pleasure, he says, “because the JGH is so well known as a wonderful medical institution, not only in Quebec and Canada, but around the world.

“It’s been said many times, but I have to emphasize again that the Jewish feels like a very special family. It’s a place where everyone in every field—including donors, volunteers and people from all walks of life—interact to make the hospital a better place for patients. That’s how I felt when I joined the Foundation and I feel just as strongly about it today.”