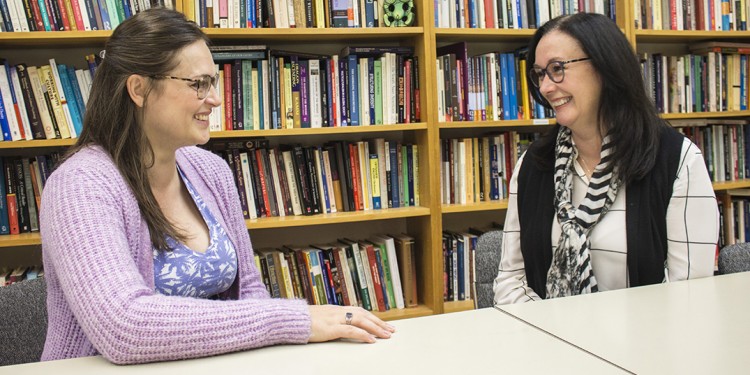 Sarah (left) chats with Dr. Barbara Hayton about the birth of her son last summer.

Pregnancy is a time of joy for most women, but for Sarah, it was overshadowed by anxiety. She was filled with fear about childbirth, and during her most difficult moments, she panicked when hospitals were mentioned and when labour was discussed.

“I really struggled,” recalls Sarah, who has asked that her real name not be disclosed.

Fortunately, help was available. After getting a referral from the Goldman Herzl Family Practice Centre, Sarah began seeing Dr. Barbara Hayton, Director of the JGH Perinatal Mental Health Clinic. Thanks to steady support and psychotherapy sessions with Dr. Hayton, Sarah began to approach childbirth with the assurance she was in good hands.

“Now that the birth has happened, it’s been magical,” Sarah said in an interview recently, her baby boy smiling on her lap. “Motherhood has been totally fantastic.”

With support from Dr. Hayton, a family doctor in the JGH Department of Psychiatry, expectant mothers have access to treatment. Having worked with women like Sarah for nearly 30 years, Dr. Hayton now sees about 175 patients a year who struggle with ailments ranging from anxiety to suicidal thoughts and, in rare cases, postpartum psychosis.

Sarah’s struggles are not unique. For a minority of women, the perinatal period can be clouded by mental illness, with one in five women suffering from anxiety or depression.

Historically, disorders associated with pregnancy have focused on postpartum depression, but that emphasis is shifting to the entire prenatal period, as obstetricians and other healthcare providers become more attuned to recognizing mental illness during pregnancy.

A decade ago, pregnant women represented only about 20 per cent of Dr. Hayton’s patients. Today they make up 60 per cent, with some consulting the doctor in the earliest stages of their pregnancy.

Historically, disorders associated with pregnancy have focused on postpartum depression, but that emphasis is shifting to the entire prenatal period.

Sarah began seeing Dr. Hayton regularly in her final month. Together, they ran through various scenarios of what might occur during delivery, and this helped demystify the process, as Sarah began visualizing the birth and allaying her fears.

As the birth approached, Dr. Hayton also gave Sarah her phone number and invited her to call her right after the birth. “I felt empowered, that this was going to be manageable,” Sarah says. Last July, she gave birth to a healthy son, without complications, at the JGH.

Experts say perinatal mental health disorders sometimes go unrecognized and undertreated because of the stigma they carry. Some women are reluctant to admit to their troubles, fearing they may be declared unfit and have their baby taken from them.

Many often fail to recognize that what they are experiencing—disturbed sleep, weak appetite, poor concentration, feelings of guilt, even suicidal thoughts—are symptoms of a mental-health ailment.

“Often a pregnant woman may say to me, ‘I’m afraid of post-partum depression,’” Dr. Hayton says. “And I reply, ‘You’re already depressed.’”

Early detection is critical. Left untreated, depression and anxiety during pregnancy can contribute to low birth weight, pre-term birth and even psychiatric risks for the child.

Mild cases can be treated with better social support, Dr. Hayton explains. In other instances, the patient might require psychotherapy, possibly supplemented by medication.

However, Dr. Hayton notes that each patient’s situation is unique. She recalls a woman in her 30s who wanted to terminate the pregnancy of her unborn girl. Since she had had an abusive mother, she feared she would become like her mother and mistreat her baby.

The woman was referred for psychotherapy, which proved successful and enabled the woman to bond with her child after giving birth without incident.

Psychotherapy was similarly effective for Sarah, who had been traumatized before pregnancy, having been swept up in a terrorist attack in Europe in 2015. According to Dr. Hayton, people who have undergone anxiety, depression or post-traumatic stress are at a higher risk of perinatal mental-health disorders.

However, she emphasizes, a solution is available, and she feels privileged to accompany mothers-to-be on one of the most significant passages of their lives. “I find it very gratifying to be able to help a woman at a time that’s so critical to her.”