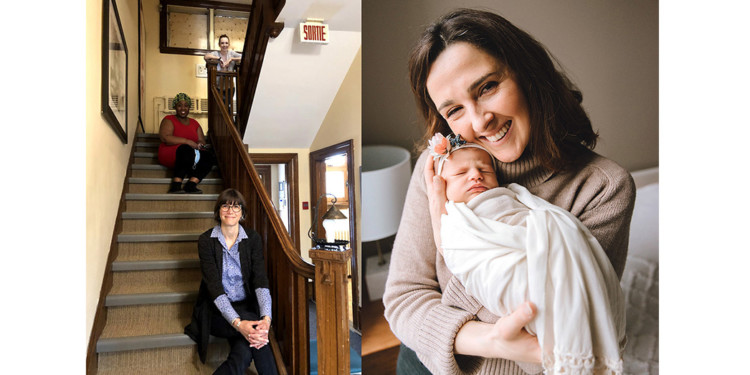 Shortly after Nicole-Ann Shery (right) gave birth to Kayla on March 3, the COVID-19 lockdown began. She used telehealth to stay in touch with her midwife, Kathleen McDonald (top of staircase), who is shown in the Côte-des-Neiges Birthing Centre with midwife Yvette Munezero (centre) and Maëcha Nault, Head of Midwife Services. (Photo at right courtesy of Reina Price.)

In mid-April, six weeks after giving birth, Nicole-Ann Shery cradled her daughter, Kayla, in her arms and huddled at home in front of her computer screen for her final—and sometimes joyously tearful—post-partum visit with Kathleen McDonald, the midwife who had coached her through her pregnancy.

Joined by her partner, James Dylan, Ms. Shery connected with Ms. McDonald via a Zoom video conference, where she was able to proudly show her midwife how well Kayla was doing.

Ms. Shery also expressed her thanks during the hour-long get-together that she now describes as “kind of bittersweet and very emotional.

“It would have been nice to actually be there with Kathleen and have her hold Kayla, but COVID-19 was keeping us apart. At least we had Zoom; otherwise, it just wouldn’t have felt the same. I wouldn’t have had the same closure.”

The strong, in-person bond between Ms. Shery and Ms. McDonald was initially established in the months leading up to Kayla’s birth on March 3, while the spectre of the coronavirus was still a distant threat.

Thus, Ms. Shery was able to come in person to the Côte-des-Neiges Birthing Centre—a member facility of CIUSSS West-Central Montreal—where she met face to face with Ms. McDonald for all of her pre‑natal consultations.

However, once COVID-19’s presence began forcing Montrealers to remain at home to avoid catching and spreading the virus, mother and midwife had to rely on telehealth—several telephone calls, plus the final video meeting—to stay in touch.

“I don’t know if anything can make up for the lack of in-person contact,” says Ms. Shery, “but seeing each other at the end was almost like being there physically. I’m grateful for that.”

Additional articles in the current series
• How COVID-19 yanked telehealth out of the future and into our daily lives
• Family medicine teams defy COVID-19 by linking to patients via telehealth
• Using the digital tools of telepsychiatry to forge emotional bonds
• Telehealth opens new doors—and video screens—to rehabilitation at home
• Telehealth becomes vital nursing tool in monitoring patients’ health at home
• Telehealth plays key role in Radiation Oncology, even though treatment is provided in person
• High marks from Physiotherapy patients surveyed about tele-rehabilitation

Other articles
• Telehealth is positive legacy of COVID-19 pandemic, medical leaders say
• Telehealth intervention to reduce isolation of older adults
• How the Segal Cancer Centre is responding to the coronavirus pandemic
• Telehealth: The future of health care is already here 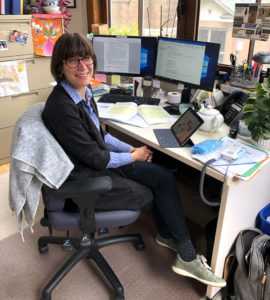 For Ms. McDonald, the pandemic has meant making a significant departure from the traditional model of midwifery, “which is entrenched in a holistic approach to pregnancy, delivery and post-partum.

“During normal pre-natal appointments, we develop an inter‑personal relationship with the family. We get to know their fears, they become comfortable talking to us, and we can realistically prepare them for what to expect during labour, delivery and new parenthood.

“Even though the pandemic forced us to make some major changes, video conferencing has been a big help. We can still include the partner, watch the parents’ non‑verbal interaction and have appointments with a personal touch. I feel we’ve arrived at a good middle ground.”

However, she explains, once the situation stabilizes, the classes will again be conducted in person, because “our clients appreciate the interaction with other families that are all in the same situation. It’s one of the ways we prepare them for natural birth.” 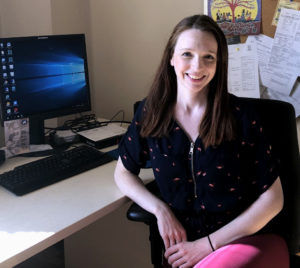 Before COVID-19, telemedicine was relatively scarce, not just in the facilities of CIUSSS West-Central Montreal, but throughout Quebec. According to Dr. Justin Cross, the CIUSSS’s Chief Digital Health Officer, this was because the Ministry of Health and Social Services did not provide widespread reimbursement to physicians for most telehealth activities.

The watershed moment came this past February, just before COVID-19 struck the province. The Ministry realized that to prevent the spread of the virus, most patients (and many members of staff, including some clinicians) had to stay away from hospitals and certain other healthcare facilities.

So, moving quickly, the government “approved reimbursement for most physician services that were delivered by video and telephone,” says Dr. Cross. As well, the Ministry of Health negotiated directly with Zoom for accounts that met higher standards of security and encryption.

However, the Côte-des-Neiges Birthing Centre had to start from scratch, says Ms. Nault, because unlike some other CIUSSS facilities, it had had no experience with telehealth before the pandemic.

In fact, she adds, the Centre still relies on paper charts, although she expects that the leap to electronic medical records will be made in the near future.

From a technical perspective, Ms. Nault says, the Centre has come a long way in a short time, because of solid support from the problem-solvers in the CIUSSS’s Directorate of Information Technology.

Meanwhile, telehealth—especially the video aspect—has caught on with clients and staff alike, since “it gives us a great deal of information about the baby’s health, such as the colour of the skin, which may change if jaundice is present.

“Also, video is really helpful for providing breastfeeding advice, because we can watch the interaction between the baby and the mother, including the way the baby latches onto the breast.”

“When you see the new mother and her family, you get a better idea of how everyone is doing in the post-partum period.”

Ms. McDonald adds that video can even convey a range of subtle visual cues about the mother’s general level of physical and psychological comfort after giving birth. “We get to see the small, non‑verbal details in the family dynamic, as well as signs of things like post-partum depression or baby blues.

“If a patient is on the phone, she can put up a front and say something like, ‘Oh, yes, I’m okay.’ But when you’re able to actually see the new mother and her family, you get a much better idea of her emotional state and how everyone is doing, which is so important in the post-partum period.”

Given midwifery’s emphasis on in-person contact, Ms. Nault says many of the Birthing Centre’s traditional services will probably return after COVID-19 has run its course. However, she adds, there’s no doubt that will telehealth continue to make its presence felt, often for triage or as a type of diagnostic tool.

For instance, she says, “we might use Zoom if a pregnant woman contacts us with an urgent question and we need to determine if this is a real problem or whether she can wait a couple of days before coming to see us at her regularly scheduled visit.”

Ms. McDonald also notes that since many clients travel during pregnancy, “Zoom is an ideal way of staying in contact with them and being available to help, if a problem arises while they’re on the other side of the world.”

“In using telehealth, the midwife may have to work a little harder to build a relationship with the mother-to-be and the family,” says Ms. Nault, “but telehealth has also made us more flexible and better able to respond in certain circumstances.

“It has quickly become another practical way of providing mothers with the support they need, which is why I think it’s here to stay.”