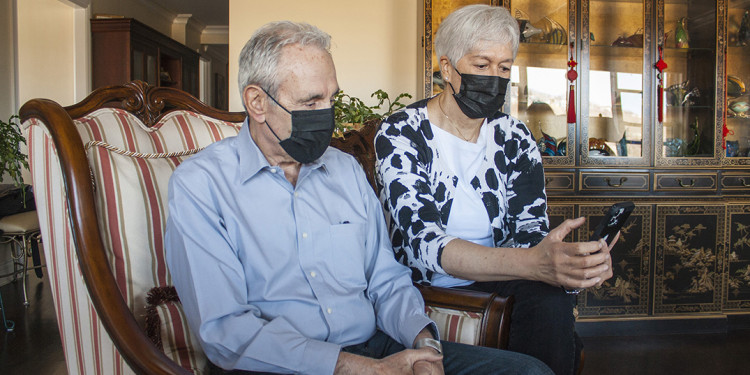 Larry Katz, a former JGH patient, and his spouse, Carol Adams, demonstrate how they connected to the Hospital@Home program via a smartphone that was lent to them by the JGH. Several times a day, they used the phone to take calls or participate in video meetings to update the care team about Mr. Katz’s recuperation at home. (Click on this or any photo to enlarge it.)

Larry Katz was adamant: He most certainly did not want to spend another four days in the hospital!

His triple bypass had been completed successfully at the JGH on February 15, and now, more than a week later, he felt healthy and upbeat.

If all he had to do was wait four days for a follow-up cardiac procedure, why not do it at home?

Sorry, his nurse explained, but so soon after major surgery, it was vital for his condition to be monitored in the hospital.

And then, a couple of hours later, the answer was “Yes.” 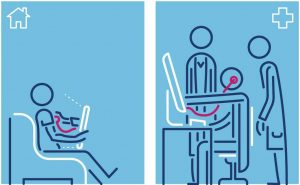 In the Hospital@Home program, certain patients complete their recovery at home (left). Using digital technology, they stay in touch with the hospital’s virtual care team, which remotely monitors their vital signs on a regular basis. (Click to enlarge.)

Coincidentally, Mr. Katz’s request came just at the point in February when Hospital@Home was being launched at the JGH.

In this new program—the first in Quebec and one of the very few in Canada—qualified patients finish their recovery at home while being monitored continuously and remotely via digital technology.

The goal is to enhance the patient’s recuperation by having it take place in comfortable, familiar surroundings.

At the same time, the patient’s risk of acquiring a hospital-borne infection is reduced, and the hospital bed is freed up more promptly for a patient who urgently needs it.

Although the patient’s location undergoes a major shift, he or she is not discharged from the hospital. Rather, the patient is now in a virtual ward whose real-life setting happens to be his or her home.

“The comfort zone is so much better in your own home,” says Mr. Katz, 80, who had his follow-up surgery at the at the Royal Victoria Hospital and, by mid-April, was feeling fine.

“I was very impressed and very satisfied with the quality of the service from the doctors,  the nurses and all of the other members of the team—very professional,” he adds.

A digital extension of the hospital

His spouse, Carol Adams, notes that participating in Hospital@Home meant they had to shift their perspective and realize that Mr. Katz was actually in a digital extension of the hospital, even as he relaxed in their Westmount condo.

“It was a different sort of mindset, but what it amounted to was that he was still being monitored and still receiving care,” says Ms. Adams.

This strategy of having the care follow the patient is intrinsic to “Care Everywhere,” an approach that has been embraced by CIUSSS West-Central Montreal (of which the JGH is a driving force). The goal is to deliver care in whichever setting is most appropriate, safest, most convenient and most comfortable for the patient.

In a broader sense, “Care Everywhere” also aligns with two other key aspects of the CIUSSS’s over-arching mission: to find new ways of improving the quality of patient-centred care, and to take greater advantage of digital technology, wherever suitable.

Your support is vital to Hospital@Home

To maintain its effectiveness and its ability to respond to patients’ needs, the Hospital@Home program relies on support from the JGH Foundation and its generous donors.

By making a donation to the Foundation, you can help numerous patients conclude their recovery in the comfort of home.

“Hospital@Home will continue to be tweaked and refined over the coming months, but I’m confident it will become one of our CIUSSS’s most valuable next‑generation tools,” says Dr. Lawrence Rosenberg, the CIUSSS’s President and CEO. “I have no doubt it will have lasting value for a growing number of patients.”

In its pilot phase this past winter, the program was known as COVID@Home, since its participants were exclusively COVID-19 patients whose hospitalization was nearly at an end.

The results were so promising that COVID@Home evolved into Hospital@Home in February, encompassing a wider range of patients. Among them were those with heart failure, chronic obstructive pulmonary disease, pneumonia, urinary tract infections and cellulitis, as well as patients recovering from certain types of surgery.

So far, a total of 22 JGH patients have taken part in both phases of the program.

However, patients can participate only if they live in the area served by the CIUSSS, and if certain other basic criteria are met, explains Erin Cook, Associate Director of Quality, Transformation, Evaluation, Performance and Ethics. 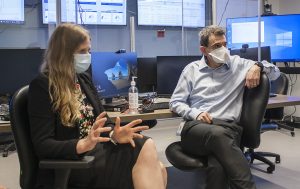 Erin Cook, Associate Director of Quality, Transformation, Evaluation, Performance and Ethics, and Dr. Lawrence Rudski, Director of the Azrieli Heart Centre, discuss the Hospital@Home program, while referring to data on screens in the Command Centre at the JGH.

First and foremost, she says, involvement is voluntary and no patient is pressured into completing his or her recovery at home. Patients must also be thoroughly assessed to be sure they’ve recovered to the point where remote monitoring is appropriate and safe.

Another crucial prerequisite is the at-home presence of a caregiver to provide general support and to help operate the technology, says Dr. Lawrence Rudski, Director of the JGH’s Azrieli Heart Centre and Chief Medical Information Officer of the CIUSSS.

The main device, which the JGH lends to the patient, is a smartphone or iPad that contains the necessary software. In some instances, the hospital also supplies a monitoring device, such as an adhesive patch that is affixed to the patient’s chest and sends medical data remotely to the care team.

Dr. Rudski says connecting by video allows the care team to see the patient and use this information to help determine how he or she is coming along. For example, he explains, someone with a heart condition might be asked to demonstrate his or her steadiness by walking while on‑screen during the video chat.

In Mr. Katz’s case, contact was made five times a day between 6:00 a.m. and 11:00 p.m., usually by a phone call from a nurse. On each occasion, Mr. Katz answered a series of questions about his condition, while Ms. Adams discussed the medical data (blood pressure and other vital signs) that she had measured and recorded in a log.

In addition, during regular 10- to 12-minute video sessions over the smartphone, they updated the doctor and other members of the care team about various aspects of Mr. Katz’s progress.

This frequent contact, plus the phone number of a nurse they could call 24/7, reassured them that Mr. Katz was being followed closely and was in good hands.

Much the same was true of the final stage of Linda Lin’s at-home recuperation from COVID-19, but for her, getting out of the hospital as quickly as possible was a more pressing need.

In mid-December of 2021, Ms. Lin, her husband Jason Zhan, and two of their four children tested positive for the virus. However, only Ms. Lin experienced significant symptoms—most notably, a drop in her blood’s oxygen level, which she was measuring regularly at home. 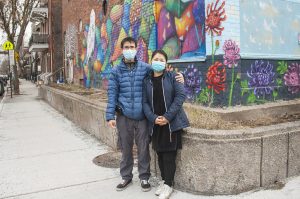 Jason Zhan and Linda Lin in the Montreal neighbourhood where they own and manage a convenience store, whose side wall is decorated with a mural of flowers.

Her condition continued to worsen. Finally, on December 21, Mr. Zhan took his 45‑year-old wife to the JGH—a natural choice, since all of their children had been born there. She was treated briefly in Intensive Care before being transferred to her own isolation room.

This was where Ms. Lin experienced significant discomfort. Although she describes the quality of her care and the attentiveness of staff as “excellent, the best,” her shortness of breath and the unfamiliar surroundings prevented her from sleeping properly—no more than three hours a night and usually much less.

Ms. Lin thinks that if she had been able to speak with someone, this might have helped to her calm down and make sleep possible. However, members of hospital staff were usually occupied at night, the quarantine kept her away from other patients, and she did not want to disturb her husband or children with an overnight phone call.

Fortunately, a turning point came in mid-January. Ms. Lin had been hospitalized for more than three weeks, when she was invited to become one of the earliest participants in the COVID@Home program.

“The hospital saved my life and made me as comfortable as possible at home.”

She jumped at the chance. On January 14, she returned with Mr. Zhan to their apartment above the convenience store they own and manage in Montreal. They brought an oxygen tank with them from the JGH in case Ms. Lin’s oxygen level fell too low, plus a wrist monitor that transmitted medical data to the care team at the hospital.

According to Mr. Zhan, his wife soon began sleeping longer each night, until she returned to her usual average of seven hours. “What a relief it was to see her making such good progress,” he says.

Five times a day, Mr. Zhan locked up the store, rolled down the window blinds and went upstairs to join his wife in a phone call with the nurse or in a video meeting with the care team, which often included a doctor, nurse, nutritionist and pharmacist.

By January 30, Ms. Lin felt well enough to end her involvement in COVID@Home and be fully discharged from the JGH. As of mid-April, her lungs were almost back to normal, though she sometimes felt out of breath if she walked too far or climbed the stairs too quickly.

“I really appreciate what the JGH did for me,” Ms. Lin says. “They saved my life and made me as comfortable as possible by watching over me at home.”

Improving care by bringing staff together and ideas to life