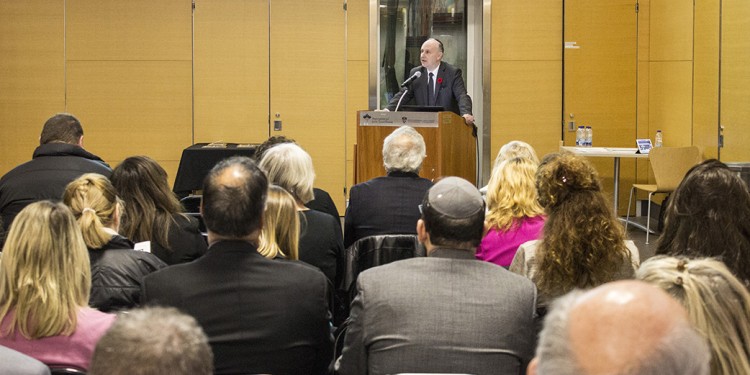 Alan Maislin, President of the CIUSSS Board of Directors.

The person-centred approach, in which the perspective of the healthcare user is crucial to the planning and delivery of high-quality care, will be emphasized to an increasing extent in 2018-2019 and for the foreseeable future, says the President and CEO of CIUSSS West-Central Montreal.

Speaking on November 7 at the CIUSSS’s third annual Public Information Meeting, Dr. Lawrence Rosenberg said the ultimate goal is to make this approach an intrinsic element of the workplace culture in facilities throughout the healthcare network.

To this end, the CIUSSS has joined Planetree International, a U.S.-based organization that has spent 40 years working in 25 countries with 700 healthcare institutions that are striving to fully embrace and implement the concept of person-centred care.

“In person-centred care, we view users as equal partners in planning, developing and monitoring their own care,” Dr. Rosenberg told members of the public and senior CIUSSS managers during the meeting at the JGH. “As a result, we come to view them as experts whose input is crucial to the work of our professionals.”

Anne Lemay, Associate Executive Director for the Support, Administration and Performance Programs, presented an overview of achievements in each of the CIUSSS’s directorates.

Dr. Rosenberg was a featured speaker at the meeting, which acquainted the public with highlights of the CIUSSS’s activities in 2017-2018, while enabling visitors to direct questions to top CIUSSS directors and managers.

In addition, winners were announced in the second annual edition of “A Shot of Happiness”, a photography contest for CIUSSS staff.

Dr. Rosenberg acknowledged that challenges still lie ahead—for example, the difficult battle against the spread of the CRO super-bug, the necessity of improving hand-hygiene rates among staff, and the need to upgrade the network’s digital defences against attacks and other security breaches.

However, seeing the user as a person, rather than just a medical case, is what enabled the CIUSSS to be effective in so many initiatives during the past year, Dr. Rosenberg said.

Marisol Miro, Commissioner of Complaints and Quality of Service, explained the role of the complaints process in improving the quality of care.

“Our obligation, not just in health care and social services, but in all fields, is to continually ask ourselves what is fastest, simplest, most comforting and most effective for the people whom we serve,” Dr. Rosenberg said.

Ron Waxman, a member of the Board of Directors responsible for Auditing, Performance and Quality Management, summarized the financial figures for 2017-2018.

“Our goal is to do more than just dispense facts. We must create a welcoming atmosphere of warmth, community and empowerment.”

Also among the speakers at the Public Information Meeting was Alan Maislin, President of the CIUSSS Board of Directors, who confirmed the importance of fully integrating a users-first approach into all of the network’s activities.

“The last three years have not been easy,” Mr. Maislin said, “but I like to feel that we’ve built the car, and now is the time when we can polish it and make it better.”