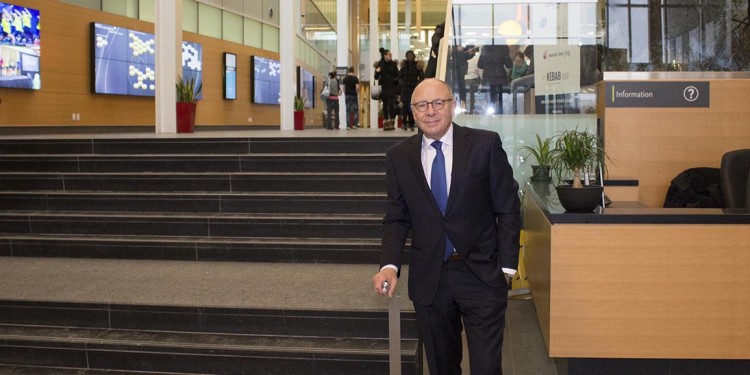 Board of Governors is crucial to protecting hospital’s legacy

In the two years since it came into existence, CIUSSS West-Central Montreal has been garnering the lion’s share of headlines, as it strives to improve the quality of care in a network of facilities that includes the Jewish General Hospital.

Thus, some healthcare users may be less familiar with simultaneous efforts—somewhat understated, yet consistent and focused—to protect and preserve the JGH’s unique character, legacy and values, along with its standard of medical excellence.

This activity is spearheaded by the JGH Board of Governors, which ensures that the JGH’s decades‑old identity remains distinctive and strong, even as the hospital plays a pivotal role in the CIUSSS.

“There’s no shortage of people here who have the passion and dedication to work with us,” says Howard Dermer, President of the Board of Governors. “We have every right—and we will exercise it—to make sure that this jewel of our community is maintained in the way that the community expects it to be.”

By “every right”, Mr. Dermer is referring to the provincial legislation that not only created the CIUSSS system, but contains provisions to protect the character of institutions like the JGH, whose special traits and linguistic traditions have been evident throughout their history.

Mr. Dermer, who became President in September 2016, explains that the Board of Governors is deeply involved in the recruitment of outstanding physicians and leaders, the long-range planning of the hospital’s physical development, public access to care in English, ties with the community, and liaison with the JGH Foundation.

“We have every right—and we will exercise it—to make sure that this jewel of our community is maintained in the way that the community expects it to be.”
Particularly noteworthy, he says, is that the Board of Directors of the CIUSSS must obtain approval from at least two-thirds of the JGH Board of Governors for such matters as the sale of hospital-owned property, any request to alter the JGH’s bilingual status, or any decision of a cultural or linguistic nature that relates to the public’s access to services.

In addition, the Board of Governors benefits from the deliberations of two key—and similarly named—committees. The President’s Advisory Committee, whose members include several of the JGH’s past presidents, deliberates on a wide range of issues of relevance to the hospital. The discussions may become fairly animated, he says, “but you end up gravitating toward a meaningful consensus, and everybody is committed to working toward achieving a common goal—advancing the JGH.”

The second significant group is the Advisory Committee, through which the JGH Board of Governors makes recommendations to the CIUSSS Board of Directors, keeps the CIUSSS up to date about the hospital’s needs, and confers with top CIUSSS managers.

Also of crucial importance is Mr. Dermer’s close working relationship with Dr. Lawrence Rosenberg, President and CEO of CIUSSS West-Central Montreal, with whom he meets on a weekly basis. “I can’t imagine Dr. Rosenberg being more committed to this hospital, even if he weren’t the head of our CIUSSS.

It was in the mid-2000s, in the midst of a distinguished legal career at Lapointe Rosenstein Marchand Melançon L.L.P., that Mr. Dermer first felt the desire to look beyond his professional life and devote a substantial portion of his time and expertise to the JGH.

Those skills were substantial, based on his experience as a commercial and real estate litigator for Lapointe Rosenstein’s predecessor in 1970, for Lapointe Rosenstein starting in 1975, and as a managing partner in the firm as of 1996. Although Mr. Dermer retired from active practice in 2010, he remains counsel to the firm, where he works almost every day.

At the same time, his involvement in the JGH has increased steadily over the past 10 years. Initially, he looked to the example that had been set by Brahm Gelfand, who has been Mr. Dermer’s colleague at Lapointe Rosenstein since 1975, served as President of the JGH Board of Directors from 1993 to 1995, and still maintains his active role at the hospital in an advisory capacity.

“It’s important for me to see that this hospital remains strong, and the only way to do that is dedicating yourself to meeting its challenges.”
Then Mr. Dermer approached the President and CEO of the JGH Foundation, Myer Bick, with whom he had attended and graduated from law school. That led to his participation in a variety of Foundation committees, including chairing the first three outings of the Enbridge Ride to Conquer Cancer—a highly successful cycling event to raise funds—in 2009, 2010 and 2011.

So valued was Mr. Dermer’s work that he received the Foundation’s Distinguished Service Award in 2011, followed by a term as Chair of the Foundation Board from 2013 to 2016. At that point, he took over as head of the JGH Board of Governors from its inaugural President, Allen F. Rubin, whom Mr. Dermer praises as “a tough act to follow.

“He was very dedicated, very focused and very in-tune with what was going on. I lean on him heavily for information and advice, and Allen has been very generous with his time and an excellent mentor.”

Despite his many responsibilities on the Board of Governors, Mr. Dermer feels so connected to the JGH that he continues to serve on various Foundation committees, including those dealing with strategic planning and human resources.

“I’m surprised, even now, how involved I still am with the Foundation,” he says. “But the fact is, I just can’t get enough of it. It’s important for me to see that this hospital remains strong, and the only way to do that is dedicating yourself to meeting its challenges. As long as the leadership of the JGH is strong, we will always be a major factor in Montreal and Quebec’s healthcare network.

“That’s also why I feel so passionately about the Board of Governors and how much it can accomplish. We’re not sitting around and waiting for change to happen. The Plan B’s and the Plan C’s are already being discussed, because we need to be ready for what lies ahead.”

Becoming a “bridge over troubled waters” in support of cancer patients