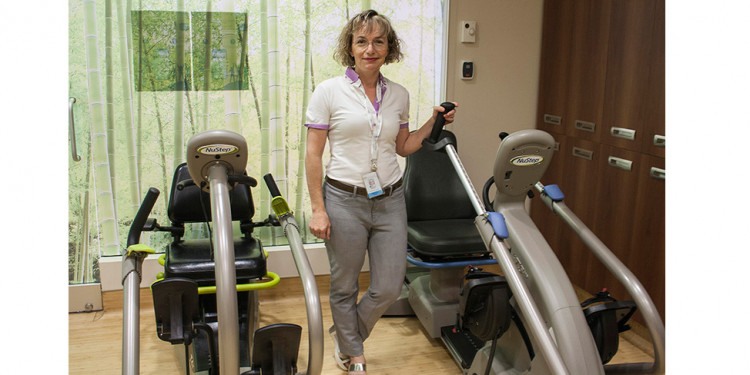 A JGH hematologist is taking a closer look at how exercise helps people who have lymphoma, including lowering the odds that survivors will develop cardiovascular disease later in life.

Dr. Nathalie Johnson, a clinician-scientist in the Lady Davis Institute at the JGH, says the general value of exercise for cancer patients is already widely acknowledged.

However, she has embarked on a three-year study to help determine more precisely the beneficial effect that exercise has on patients who are undergoing (or who have completed) chemotherapy for lymphoma.

Dr. Johnson also hopes to draw some conclusions about the long-term consequences of exercise and about how to motivate patients to maintain an exercise routine after therapy has concluded.

During most of her career, Dr. Johnson has focused on gaining a better understanding of why patients do or do not respond to chemotherapy, as well as investigating whether a patient’s own immune system can be harnessed to help fight lymphoma.

However, Dr. Johnson says, she has become increasingly interested in helping survivors to overcome the physical and psychological difficulties they face, even after cancer is no longer an immediate threat.

She notes that lymphoma—which targets the lymphatic system, part of the body’s germ-fighting network—is the most common type of cancer in people under 40. It is also one of the most curable cancers.

Dr. Nathalie Johnson is planning to recruit a total of 50 patients over the next two years for her Lymfit study. Its goal is to gather data about the effects of exercise in individuals who are now being treated for lymphoma or who have recovered from the disease.

If you would like to participate, Dr. Johnson can be reached at nathalie.johnson@mcgill.ca.

As a result, there is a large population of lymphoma survivors who probably have many more years of life ahead of them, but who also face the possibility of long-term complications. Chief among these is cardiovascular disease, the most common cause of death among those who have had lymphoma.

“Even though these people have won the battle against cancer, their quality of life is poor,” Dr. Johnson explains. “Most of these patients have experienced significant side-effects of their therapy, and they’re left feeling very fatigued and anxious. Many, especially younger patients, also have a great fear of cancer recurrence.

“That’s why I encourage them to maintain healthy habits, such as exercising and not smoking. Good control of hypertension, diabetes and weight is also important to prevent them from getting heart disease later on.

“We always recommend exercise, but there’s so much more we need to know about it. What aspects of the quality of life are most affected? Can exercise decrease some of the short-term side effects of chemotherapy? Can it make patients less sedentary on a medium- to long-term basis?”

“We always recommend exercise, but there’s so much more we need to know about it.”

Earlier this year, Dr. Johnson and her team conducted a pilot project involving 20 patients, which determined that it was feasible for her to proceed with a full study. During the pilot, participants had their physiological data and exercise activities remotely monitored for three months via a Fitbit tracker.

The participants were prescribed a personalized exercise program by a kinesiologist, who met with them on a virtual platform every two weeks. Each time, he encouraged the participants to increase their activity levels until they met the recommended exercise guidelines for cancer survivors.

These data were stored  at the JGH on a secure server (called Lymfit) and were correlated to quality-of-life measures that were collected before and after their exercise intervention.

The results show that the Lymfit program led to significant improvements in physical function, sleep disturbances, the ability to participate in social activities, and decreased fear of cancer recurrence.

It also contributed to an increase in the number of steps that participants took each day, and it decreased the amount of sedentary time among participants who did not meet the recommended physical activity guidelines.

Over all, the pilot was deemed a success and received strongly positive reviews from the patients who took part in the study.

In the full study, 50 participants—some of whom are still receiving chemotherapy—will be split into two groups: One will get an immediate exercise intervention, while the other will receive an intervention three months later.

The goal is to determine whether Lymfit can increase the number of patients who meet the recommended exercise guidelines after the three-month intervention.

Make a difference, make a donation

Your donation to the JGH Foundation helps support various research activities—such as Dr. Nathalie Johnson’s Lymfit study—and a wide range of improvements to the quality of care at the JGH.

Donations to the Foundation are gratefully accepted online.

It will also ascertain whether exercise is sustained for a longer 12-month term.

As well, the researchers want to determine the effect of exercise on various aspects of the quality of life, including any improvement in the participants’ ability to return to work.

Financial support for the pilot project and the upcoming study is being provided by the JGH Foundation, using proceeds from its Weekend pour combattre le cancer.

To support her research, Dr. Johnson has drawn on the expertise of Ross Andersen, a kinesiology expert at McGill University, and his student, Christopher Angelillo; plus Christine Maheu, a nurse researcher at the MUHC, her student, Wing Lam Tock.

Dr. Johnson also collaborated with members of information technology team at the Lady Davis Institute, who helped with data collection and maintenance of the Lymfit server.

“Now we’ll have more information about the benefits of exercise for specific symptoms,” she says. “For example, before prescribing sleeping pills to minimize sleep disturbance, we might recommend trying exercise.

“It’s wonderful that regular exercise has done so much for so many different cancer patients.”