Quality of care already on the upswing in Pavilion K 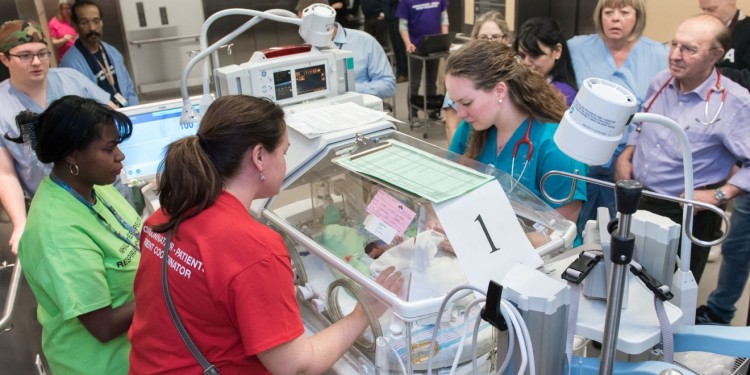 During the move on January 24, an incubator is checked en route to the new Neonatal Intesive Care Unit in Pavilion K, where noise levels and the number of alarms are noticeably lower.

Just weeks since it swung into operation, Pavilion K already appears to be improving the well-being of patients and the quality of their care.

Preliminary indications are that notable improvement has already occurred in two key areas: nosocomial infections (those that originate in the hospital) and noise levels.

According to Silvana Perna, Coordinator of Infection Prevention and Control, as of March 4, there had been no transmissions of VRE (a type of antibiotic-resistant bacterium) for six weeks on the sixth floor of Pavilion K, and no VRE transmissions for five weeks on the seventh floor.

Before Pavilion K opened, Ms. Perna and other JGH healthcare professionals presumed—correctly, as it turns out—that the spread of infection would slow noticeably, since all patients would occupy private rooms.

Johanne Boileau, Director of Nursing, notes that the JGH has always been diligent about promoting hand hygiene and implementing measures among staff to minimize the spread of infection. “But even with all of that, prior to the move, we were still struggling and getting a lot of nosocomial infections,” she says. “That’s why I was not expecting such a radical decrease so rapidly in Pavilion K, but it is quite impressive.”

Ms. Perna says that some patients elsewhere in the new wing did have other types of infections before March 4, but “the majority were community-acquired, except for a few sporadic nosocomial cases.”

Also noteworthy is the significantly lower noise level, especially in the Neonatal Intensive Care Unit, where each group of six incubators now has a room of its own (known as a pod). This is far different from the previous NICU, where more than 30 incubators were crammed into one oversized room that bustled with constant noise and activity.

As early as January 28 (four days after the move), the JGH Board of Governors was informed by Joanne Côté, who had overseen the transition to Pavilion K, that during the NICU’s first night in its new quarters, “apparently, no alarms were sounded on the monitors for the babies.

What’s happening to all of that empty space?

With the relocation of so many units to Pavilion K, the legacy hospital building finds itself with an abundance of empty space. So far, however, the only confirmed plans involve renovating the old Emergency Department (vacated in 2014) and using it for the new Nephrology Centre, which includes hemodialysis.

According to Johanne Boileau, Director of Nursing, it has been suggested that the patient experience can be improved by moving beds from some of the oldest—and most old-fashioned—areas in the main building to legacy units that had been renovated only a few years before the move. In these more up-to-date units in the main building, additional renovations would create a greater number of private and semi-private rooms.

However, Ms. Boileau says since such a plan would not be funded by the government, discussions are still ongoing to determine how best to use the space and how to finance any proposed renovations.

The JGH Foundation is now conducting a major fundraising effort to support the renovation and outfitting of vacated areas in the main hospital. This would lead to the creation of additional private or semi-private rooms, as well as the expansion of existing services and the addition of new services.

For example, plans have been prepared to relocate the Orthopedic Clinic, the Thrombosis Clinic and the Psychiatric Inpatient Unit into newly reconstructed spaces.

For more information or to donate, please visit the JGH Foundation’s Campaign page or call 514-340-8251.

“Also, the number of calls from patients on any given unit is lower. As I was making my rounds this week, everybody mentioned that fewer call bells were going off.”

Ms. Côté said the quieter conditions may be contributing to lower anxiety levels, or perhaps the new decentralized nursing system makes patients feel more secure. “We’re not quite sure why,” she added, “but it’s amazing that in only a few days, we’ve seen such a change.”

Cutaway illustration of Pavilion K’s departments and medical units, from the perspective of someone on Légaré St. The main doors (centre, green) open into a large reception area, known as the Agora. Also at street level (left, light blue) are the doors to the Emergency Department. Links on floors 2 through 7 (centre, pink) connect the medical departments and patients’ units (left, various colours) with the main hospital building (right, white).

More recently, Ms. Côte, who is now Director of Transformation (and Associate Director for Innovation and for Quantitative and Prescriptive Analysis), said that most observations about the noise reduction have been anecdotal. For this reason, a study is being conducted in the NICU to monitor the distress calls and to determine whether, and to what extent, there is a correlation with noise levels.

What’s indisputable, says Dr. Louise Miner, Director of Professional Services, is that “the place is so big that you don’t get a feeling of loudness or urgency”—an environment similar to that of the new Emergency Department, which opened in Pavilion K in February 2014.

“When you walk through the ER, it’s kind of serene,” says Dr. Miner. “The work areas where everybody convenes are busier places, but the patients in their rooms don’t see or hear all of that activity, which is good.”

However, along with the successes, there have been some difficulties, as well. According to Ms. Boileau, one of the most serious has been the need to improve the smooth flow and use of case carts in Surgery.

Previously, surgical staff chose their own instruments before an operation; now everything is pre‑chosen after sterilization and arrives on a case cart. If all of the items in the cart are not exactly right or are not delivered on time (as has sometimes been the case), there is a domino effect of delays.

On the whole, though, staff seem happy with the new environment, says Georges Bendavid, Director of Technical Services, who is informed about almost every problem or glitch. Most, he says, have been the sorts of minor problems that occur in any large move—for instance, ventilation that needs adjusting, the lack of hot water in a particular sink, or requests for bulletin boards or coat hooks to be installed.

“When I walk the floors and speak to people,” Mr. Bendavid says, “I get good vibes—a good feeling, it’s nice. And even if they have some criticism, they say it in a nice way.”

The underlying reason for the positive attitude among staff, Mr. Bendavid explains, is that a major effort was made to have everything as close to perfect as possible on the day of the move. This was achieved between July 2015 and mid-January 2016, when employees repeatedly visited their future work areas and looked for anything that didn’t meet their needs or didn’t function as it should.

“Those last six months were not easy,” he recalls. “There many requests—‘I want a wall moved,’ ‘I want some plugs changed,’ ‘The lighting isn’t great,’ ‘The counters are too low.’ But we made all of those changes before the users came on-site.”

When staff finally moved in and found everything to their liking during the first few days, they were left with a positive impression that has stayed with them long afterwards, says Mr. Bendavid. And even if the odd problem arose later, what stuck in employees’ minds was their pleasant experiences on arriving in their new quarters.

Ms. Côté agrees, attributing the transition’s success to the numerous simulation exercises that staff performed, as well as their almost obsessive attention to detail during the final months of 2015. “Before the move, if you walked into your future work area, it might have looked okay,” she explains, “but unless you did the exercise, you might not have realized that some things weren’t quite right.

“Since we started going in as early as July, we were able to make simple but important corrections. These weren’t necessarily deficiencies—just seeing and understanding that something that was supposed to go in one place would really work better in another place. And this might mean that an electrical outlet or some other fixture had to be moved.”

Ms. Côté adds that the hands-on approach of the Transition Team meant that “we were checking everything in great detail, from lights to electrical outlets to doors. It was a lot of work, but we saw the results: When Pavilion K opened, there was much less negative feedback than we expected. Going the extra mile really paid off.”