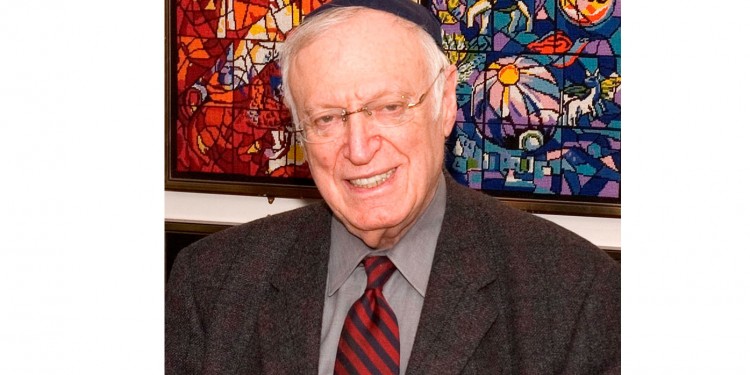 Earlier this year, Brahms E. Silver, an Oncology Social Worker at the JGH, travelled to Israel to visit the gravesite of the hospital’s former chaplain, Rabbi Myer Schecter. Here Mr. Silver explains the reasons for his trip and the lasting impression that Rabbi Schecter made on him.

As we travel on life’s journey, we meet many people along the way. Some we hardly notice, as they enter and leave our lives with little or no fanfare. If we’re lucky, however, certain individuals touch the deepest recesses of our heart and soul, and we are changed forever. For me, Rabbi Dr. Myer Schecter—may his memory be a blessing—was such a person.

Rabbi Schecter—who died on December 13, 2005, at the age of 76, after a courageous battle with cancer—was the chaplain (or, more formally, the Director of Pastoral Services) of the Jewish General Hospital from 1980 to 2005. Throughout his tenure, he was known and highly respected as a man of distinction and a man of God, whose gentle manner embraced the presence of everyone with whom he crossed paths.

As an Oncology Social Worker who counsels cancer patients and their loved ones, I consider the Rabbi to have been an exemplar of the true meaning of what professionals in my field aspire to achieve. Often, in the face of tragedy, he brought light to darkness. Thus, it’s hardly surprising that he and I became genuine friends. And when he died, I vowed that some day, I would make a pilgrimage to his gravesite on the outskirts of Jerusalem. That opportunity came this past February, when my wife, Vivian, and I travelled to Israel with the express purpose of honouring the memory of this saintly man.

Before leaving Montreal, I gathered several stones from the grounds of the Jewish General Hospital, and took them with me to place on the Rabbi’s monument. (It is a Jewish custom to put a small rock or pebble on a tombstone, in order to honour the deceased by letting people know the site has been visited.) These stones represented a number of JGH colleagues, including Dr. Nir Hilzenrat, Dr. Joseph Portnoy and Henry Mietkiewicz (in Communications), who all enjoyed a meaningful relationship with the Rabbi.

Additional stones were also put in place and left behind on behalf of those who would have wanted to be symbolically represented, but with whom I was unable to speak before leaving Montreal on my mission.

When we arrived at the cemetery, Vivian and I had the good fortune to be accompanied to the gravesite by Rabbi Moshe Emergui of the Chabad organization, who agreed to render, with great sensitivity, a heartfelt rendition of the Jewish memorial prayer, El moleh rachamim.

During our small ceremony, I felt thankful to have had the privilege of observing, on a number of occasions, how gifted and authentic a person the Rabbi was. When he entered a patient’s hospital room, one could feel the arrival of transformative, healing energy. What made him even more special, however, was his humility. As he was known to say, “When I walk into a patient’s room, and the patient is 90 or older, I ask him or her to give me a blessing.”

Rabbi Schecter was an adherent of Orthodox Judaism, and yet he epitomized respect for religious diversity. Although I myself have belonged to the Reform branch of Judaism for my entire life, the Rabbi never made me feel as though I was less of a Jew, just because our perspectives varied in some respects. In fact, in an article by the Rabbi that was published in The Globe and Mail shortly before his death, he wrote, “I trust that detente is possible and that true communication can exist.”

Rabbi Jonathan Sacks, former Chief Rabbi of Britain, has beautifully expressed the message that I so wish to convey in having travelled to Rabbi Schecter’s gravesite. In his book, A Letter in the Scroll, Rabbi Sacks wrote of his own late father, “This is my yizkor, my prayer to his memory. For, when Jews remember, they do so for the future, the place where, if we are faithful to it, the past never dies.”

According to tradition, the doorposts of a Jewish home are affixed with a mezuzah, a small box of wood, metal or plastic that contains a piece of parchment inscribed with religious texts. Not only is the mezuzah an ever-present sign of faith, it is a comforting, spiritual presence. As has been so aptly stated, “Rabbi Schecter was the mezuzah of the Jewish General Hospital.”