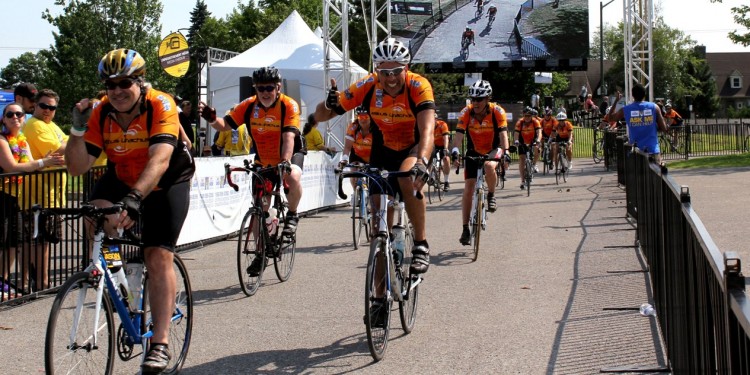 Phil Anzarut (centre) gives a proud thumbs-up as he and members of his Bikus Urachus team cross the finish line in the 2015 Enbridge Ride to Conquer Cancer.

As Phil Anzarut gears up for his fourth cross-Quebec trek in this July’s Enbridge Ride to Conquer Cancer, he’s heartened by the progress he’s made in raising awareness among researchers and the public about the rare form of cancer that cast a shadow over his life four years ago.

“I’m very encouraged by the response I’ve received so far and the fact that people feel I’ve motivated them,” says Mr. Anzarut, who has established a fund—managed by the JGH Foundation—to support the Pan-Canadian Urachal Cancer Study. “I’m thrilled at the ongoing support and I’ve made it my objective to find better treatments. Of course, a cure would be fantastic.”

Mr. Anzarut’s struggle began in mid-2011 with fatigue and blood in his urine. After surgery in early 2012, he was diagnosed with cancer of the urachus, a tube behind the navel that connects to the bladder and normally shrivels away after birth. This rare disease accounts for 0.2 per cent of bladder cancers.

Today Mr. Anzarut is in good health, having opted for a chemotherapy regimen that was developed at the Memorial Sloan-Kettering Cancer Center of New York and administered in spring 2012 at Notre Dame Hospital in Montreal.

Since then, he has been waging a tireless campaign to interest cancer specialists and researchers in the study, as well as using social media to establish an international network of patients and professionals, and to secure financial backing for the research.

The 2016 Enbridge Ride to Conquer Cancer hits the road on July 9 and 10 to help fund cancer research and care at the Segal Cancer Centre at the JGH. To take part, each rider must raise at least $2,500.

After the uplifting opening ceremonies on Saturday morning, riders spend Saturday and Sunday pedalling between Montreal and Quebec City, rain or shine. At the half way point in Trois Rivières, they gather at camp to eat, relax, enjoy entertainment and sleep overnight in tents set up by volunteers. Then on Sunday, the ride resumes. Throughout the trip, all meals, drinks, tents, medical aid and mechanical assistance for bikes are available.

Individuals who are unable to ride can get involved as crew members who serve meals, assist riders or perform other necessary tasks. Crew members are encouraged but not required to raise $500.

For more information about the Enbridge Ride to Conquer Cancer—including registration, joining or forming a team, fundraising, training or any aspect of the event—please visit the website or phone 1-866-996-8356.

This summer, Mr. Anzarut expects his 25-member Bikus Urachus team to help push the total past $500,000, as they ride in memory of a team-mate who died last year of pancreatic cancer on his 51st birthday.

Mr. Anzarut acknowledges that generating interest in urachal cancer and other rare forms of cancer remains difficult, since each form of the disease affects a relatively small number of people. However, he notes that individuals with urachal cancer face the same emotional upheaval and physical challenges as those with more common types of illness, such as breast cancer and lung cancer.

In addition, he says, when rare cancers are taken together as a group, they account for approximately 24 per cent of all cancers—more than any other individual form of cancer.

Mr. Anzarut emphasizes that research into urachal or other rare cancers also has the potential to benefit people with better-known forms of the disease. Since various types of cancer are increasingly being analyzed at the molecular level, researchers may be able to identify characteristics that are common to two or more types of cancer. As a result, the development of a customized treatment for urachal cancer could lead to the creation of a treatment for another form of cancer.

“That’s why the research will be focusing on sequencing the DNA and looking for common elements among urachal tumours and other cancers,” Mr. Anzarut says. “It’s a slow, multi-step process and it’s still pretty early in the game. But we have to start somewhere, and I’m determined to keep pushing ahead.”

Quality of care already on the upswing in Pavilion K