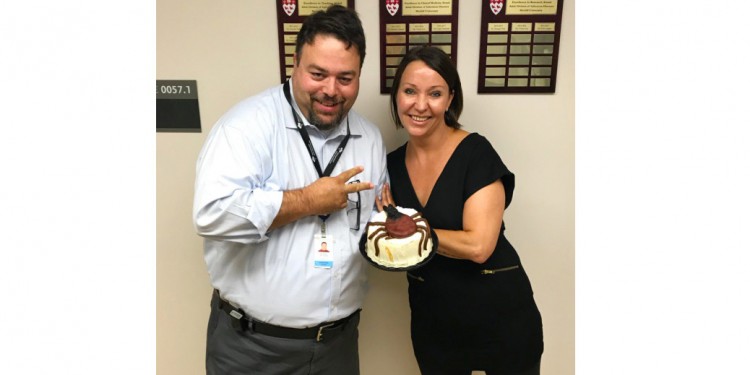 Erica Feininger baked a cake topped with a tick made of marzipan to thank Dr. Marty Teltscher for treating her Lyme disease at the JGH.

The JGH’s Infectious Diseases Clinic has made a rare diagnosis of a case of Lyme disease in someone who had not left the island of Montreal in the previous three months.

The black-legged tick, which transmits the disease in southeastern and south-central Canada, tends to be more common in rural or forested areas than in cities. In rare instances, the disease can be fatal if left untreated.

Erica Feininger, the Verdun resident who was diagnosed with Lyme disease at the JGH, first noticed a small red bump on her right hip in June. Within 24 hours, a reddened circle—roughly the size of her hand—was visible in the same spot. “I remember thinking,‘That looks kind of odd,’”Ms. Feininger recalls.

Although her doctor immediately referred her to the Infectious Diseases Clinic, Ms. Feininger opted not to drop by right away, since there were no other symptoms. But over the next few days, she had persistent headaches and neck pain.

“I kept masking the symptoms with Advil and by icing the back of my neck,” she says, “so I didn’t realize how sick I was.” By week’s end, the right side of her face, her lips and here tongue went numb—what she later found out was meningitis.

She visited the Infectious Diseases Clinic the next morning, and within two hours, tests were performed. Ms. Feininger was also seen by a number of team members, including Dr. Marty Teltscher, Director of the walk-in clinic, who made the diagnosis. That morning, she was given her first dose in what would be a month’s worth of intravenous antibiotics.

Dr. Teltscher explains that Lyme “has to be near the top of the differential diagnosis if a physician sees a patient with a rash like that, and a neurologic syndrome like the one she had, at the time of year when she came to us, and given the way tick populations are expanding.”

It’s still not clear—and probably will never be known—exactly where or how she caught the disease, says Dr. Teltscher. “There was no history given of her having travelled recently outside Montreal and we don’t have any reason to think it came from elsewhere.”

“I’m proof that you can catch Lyme disease in the city,” says Ms. Feininger. “I know I’m a rare case and I certainly don’t want to cause any panic, but I do think people need to be aware of this.”

Fortunately, the bite on Ms. Feininger’s hip disappeared within five days after she started treatment. Side effects have included a slight vision loss and sensitivity to light, but overall, Ms. Feininger says she’s feeling great. “I can’t thank Dr. Teltscher enough for saving my life,” she says.

Information from the Government of Canada on protecting oneself can be found on the Lyme disease page.

Don't let your backpack backstab you!