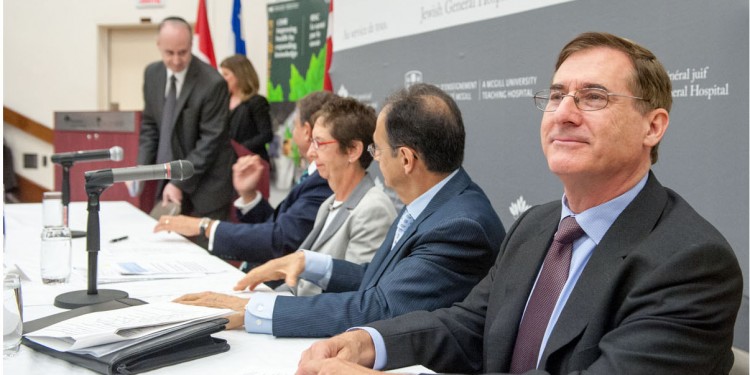 Dr. Howard Chertkow joins dignitaries at a JGH press conference in the Block Amphitheatre to announce the launch of the Canadian Consortium on Neurodegeneration in Aging.

Hard as it may be to believe, it’s only been since the early 1980s that Alzheimer’s disease and related dementias have been recognized as something other than normal aspects of aging. These diseases were not considered priorities for medical treatment or public policy until relatively recently, when the number and proportion of seniors in society rose significantly, while the totals of those diagnosed with dementia skyrocketed.

In 2011, approximately 747,000 Canadians were living with Alzheimer’s or other dementias. The Canadian Institutes for Health Research (CIHR) has estimated that by 2031, about 1.4 million Canadians will have dementia, costing the economy nearly $300 billion per year.

Now that the impact and future implications of these illnesses have grown clearer, the CIHR, in collaboration with a network of public and private partners, has established a Canada-wide network of researchers—with headquarters in the Lady Davis Institute at the JGH—to tackle dementia and related diseases, such as Alzheimer’s.

The Canadian Consortium on Neurodegeneration in Aging (CCNA) is led by Scientific Director Dr. Howard Chertkow (see sidebar), co-founder and Director of the JGH/McGill Memory Clinic, the largest such facility in Canada. At a JGH press conference last fall, Rona Ambrose, federal Minister of Health, announced the formation of this national network of 340 scientists in 20 research teams, aimed at preventing or delaying the onset of dementia and related illnesses, and improving the lives of those who are ill and their caregivers.

The Consortium will receive $31.5 million over five years from the CIHR and a group of 13 partners from the public and private sectors, including the Alzheimer Society of Canada and the Quebec Research Foundation – Health.

“The toll of suffering caused by Alzheimer’s, the extraordinary cost of caring for those who suffer, and the burden on their caregivers has made it imperative that we develop a national strategy to tackle all facets of the disease,” says Dr. Chertkow.

“We’re fortunate in Canada to have tremendous strength in dementia research that we can leverage to great advantage by establishing a national research structure. It brings people together, fosters collaboration while avoiding duplication, and offers the resources to allow the best people to do their best work.”

As Ms. Ambrose noted at the JGH last year, the Consortium “will accelerate innovative and collaborative research to make a difference in the quality of life and the quality of services for Canadians affected by these diseases, with a view to finding a cure for dementia by 2025.”

The JGH Foundation is conducting a major fundraising effort to support the Anna & Louis Goldfarb JGH/McGill Memory Clinic and its Program for Alzheimer’s disease and Dementia (PADD). The Memory Clinic provides internationally recognized expertise in the early diagnosis and treatment of memory disorders and dementia.

In partnership with the Bloomfield Centre for Research in Aging at the Lady Davis Institute, the Clinic is also at the forefront of research efforts to achieve a better understanding of Alzheimer’s disease, its causes, what makes people susceptible, and how it can be prevented. Since the operating budget provided by the government to the hospital does not include funding for the Memory Clinic or Alzheimer’s research, these areas are almost entirely dependent on private support and external funding agencies.

Individuals, corporations and foundations can support the work of Dr. Howard Chertkow and his colleagues and contribute to advances against the most debilitating conditions of advanced age by directing their contributions towards the Aging Research Axis in the Lady Davis Institute at the JGH.

For more information or to make a donation, please visit the JGH Foundation or call the Foundation at 514-340-8251.

“Despite the huge progress that has been made, the challenges are enormous,” adds Dr. Alain Beaudet, President of the CIHR. “As longevity has increased, the incidents of dementia have increased. Unfortunately, our understanding of the brain and how to prevent its dysfunction is still in its infancy.”

The brain is, without a doubt, the body’s most complex organ, as well as the most inaccessible and difficult to test. Although 170 molecules have been assessed as potential treatments for dementia, only four have gone to market—and they merely help to improve symptoms without halting the disease.

“Until recently,” Dr. Chertkow says, “research into dementia was in a position not unlike that of diabetes research in the 1700s. Back then, a doctor had no more accurate a means of measuring elevated blood sugar than touching a drop of a patient’s urine to his tongue to determine whether it tasted sweet.

“However, even though we have a long way to go, we believe we can make significant advances by bringing together the expertise that is now available. With sufficient funding and with people working synergistically, we will be able to find new molecules and new approaches to treatment. This will include medication, but it will also extend into prevention and lifestyle change. We hope the result will be transformative progress within five or ten years.”

Why a consortium on a national scale? Because the CCNA can offer a structure and a funding platform that bring together numerous clinicians and researchers to solve the puzzle of how to prevent or treat dementias. By fostering collaborations, convening an annual meeting and holding webinars, the CCNA will provide those who are working on these diseases with opportunities to learn from one another and make their efforts more efficient.

“With an infrastructure, shared research platforms, national research teams and a cohesive research agenda, we hope to accelerate our progress and eventually to find a cure,” Dr. Chertkow says.

“Even more than they already do, Canadian researchers will play a prominent role on the world stage in the global fight against dementia. For those living with Alzheimer’s and other neurodegenerative diseases, the CCNA offers real hope.”

Its great value is in helping doctors to determine whether an elderly patient’s weaker memory is just a result of aging or the first sign of cognitive impairment that may foreshadow the onset of Alzheimer’s disease. No quick and easy answer to that question was available until this diagnostic tool was developed in 2005 at the Lady Davis Institute.

Now it has even entered the world of pop culture. In the opening episode of season 3 of the hit Netflix drama House of Cards, a character who suffered a traumatic brain injury is given the MoCA to determine his status.

The tool is so widely accepted that the scientific paper in which it was introduced has been cited well over 1,000 times. This means it is referred to frequently in scholarly works around the world, because it is of such fundamental importance to the field.