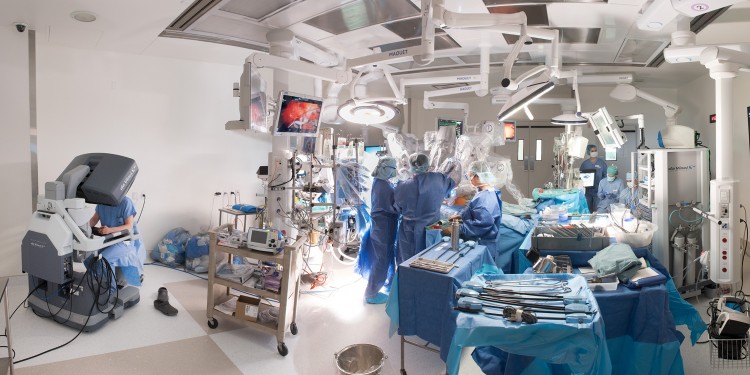 Dr. Emmanuel Moss (far left) performs robot-assisted cardiac surgery while seated at a special console. As he views a magnified panorama of the area in and around the patient’s heart, Dr. Moss uses the console’s hand and foot controls to remotely manipulate the robotic arms (centre) and perform the operation. Meanwhile, members of the surgical team surround the patient to assist in the procedure and to ensure that it is proceeding as planned.

As the benefits of robot-assisted surgery gain wider recognition, robotic procedures are being undertaken more extensively at the JGH, notably for repairs of the heart and for the minimally invasive removal of cancerous tumours of the oropharynx (which includes the tonsils, the base of the tongue and the palate).

In Cardiac Surgery, where the robotic program was revitalized in 2015, renewed use of the robot has helped to significantly reduce post-operative hospital stays for procedures such as heart bypass surgery and repair of the mitral valve (which regulates blood flow between the left atrium and left ventricle).

In Otolaryngology, surgeons are becoming increasingly proficient at a type of surgery—performed at the JGH in 2014 for the first time in Quebec—in which tumours are removed by placing robotic instruments into the patient’s mouth and down the throat. This minimizes the need for radiation treatments or chemotherapy. The JGH was the fourth centre in Canada to offer this surgery.

Not only is robotic surgery minimally invasive, it enables surgeons to use instruments with deftness and precision that are sometimes beyond the capabilities of the human hand. While seated at a special console, the surgeon views a magnified panorama of an area inside the patient’s body. The surgeon then uses the console’s hand and foot controls to remotely manipulate the robot’s arms and perform the operation. Meanwhile, members of the surgical team stand by the patient to assist in the procedure and to ensure that everything is proceeding properly.

According to Dr. Lawrence Rudski, Director of the JGH Cardiovascular Integrated Practice Unit, almost all of the patients who have undergone robotic cardiac surgery at the JGH have returned home on the third or fourth day after the operation—including one patient who went home on the second post-operative day and another who resumed work 10 days after his bypass surgery.

Donor support has played and continues to play a vital role in robotic surgery at the JGH. This has benefited a growing number of people across Quebec, while paves the way for the use of this type of surgery for more medical conditions.

In 2007, the first da Vinci robot was brought to the JGH through the generosity of private donors. This was followed in 2012 by the acquisition of a stand-alone da Vinci surgical training simulator, through a donation from The JGH Auxiliary.

A next-generation da Vinci robot was purchased in 2013, while the original was upgraded in 2015, thanks to lead gifts from principal benefactors Renata and Michal Hornstein, O.C., G.O.Q., and Sheila and Nahum Gelber, Q.C., respectively.

Community support also enabled the JGH Department of Otolaryngology to establish the first Head and Neck Robotics program in Quebec by adding specialized instruments and accessories. This has permitted the resection of pharyngeal and laryngeal tumours, and has extended the benefits of robot-assisted surgery to patients suffering from head and neck cancer.

However, funds are still needed to cover the remaining cost of upgrading the first da Vinci robot. For more information or to make a donation, please call the JGH Foundation at 514-340-8251.

By contrast, patients who have conventional open-chest surgery are generally discharged five to seven days after the operation, says Dr. Rudski, who is also JGH Chief of Cardiology.

Dr. Emmanuel Moss at the console of the surgical robot.

Breathing new life into the robotic team is Dr. Emmanuel Moss, who joined the JGH Division of Cardiac Surgery in mid-2015 and has since been working on mitral and tricuspid valve repair with Dr. Felix Ma and on bypass surgery with Dr. Jean-François Morin.

In addition to faster recovery, says Dr. Moss, robotic surgery helps to reduce rates of complications and infections. “For robotic mitral valve surgery, we use the same repair techniques as conventional surgery, but every step of the operation is different. We’re not gaining access to the heart through the front of the chest, so we need to hook up the heart-lung machine in a different way. And we need to have a different way of stopping the heart while we work on it.”

For this reason, Dr. Moss says, robotic surgery relies on tight teamwork among surgeons, operating nurses, cardiac anesthesiologists, perfusionists, surgical assistants and other healthcare professionals. “When the surgeon is sitting at the console in the corner of the operating room, he or she needs to be able to completely rely on the team. They all have to be able to communicate freely, so that each person has a clear idea of what’s going on and is comfortable speaking up when necessary.”

The extra effort definitely pays off, Dr Moss continues. “When we access the heart from the front, we distort the mitral valve, whereas when we come at it from the side, using a high definition 3-D camera, it’s a straight shot—the ideal way to visualize and repair it.”

Seated at consoles to perform robotic surgery of the oropharynx are Dr. Michael Hier (right) and Dr. Cinzia Marchica, a resident.

For removal of cancers of the oropharynx, robot-assisted surgery can sometimes be a substitute for major surgery that would otherwise be required to reach the affected area, says Dr. Alex Mlynarek, a staff surgeon in the JGH Department of Otolaryngology-Head and Neck Surgery.

In conventional surgery, he explains, it might be necessary to split the jaw, open the neck and split the tongue. Then the affected area has to be restored through major reconstructive surgery, including the transplantation of tissue taken from another part of the patient’s body.

Often, after such a procedure, the patient spends at least two weeks in the hospital, compared to the few days of hospitalization that are needed after robotic surgery, in which the oropharynx is reached through the mouth. Once the cancer is completely removed, the need for radiation treatments or chemotherapy is also substantially reduced.

Dr. Alex Mlynarek (centre) tracks the progress of robotic surgery of the oropharynx on a video monitor.

However, Dr. Mlynarek notes that only some patients are suitable candidates for this type of robotic surgery, since not everyone can open his or her mouth wide enough to accommodate the robotic instruments. In addition, the cancer needs to be limited in size, with no incursion into other nearby areas; otherwise, radiation treatment is necessary, making the surgery pointless.

Dr. Michael Hier, Chief of Otolaryngology-Head and Neck Surgery, notes that in the case of the JGH patients, it’s still too soon to know whether radiation therapy can be avoided over the long term.

Also, it remains to be seen whether patients can achieve the same cure rates as those who have had conventional surgery, and what their long-term functional outcomes will be. Nevertheless, Dr. Hier says, the initial indications look good for the 15 to 20 individuals who have had this form of robot-assisted surgery at the JGH since 2014.

To get a better understanding of the true benefits of robotic surgery, the Department of Otolaryngology-Head and Neck Surgery plans to become a co-investigator in a multi-centre Canadian trial that originated in London, Ontario. “So far, our patient outcomes have been very favourable,” says Dr. Hier, “but we have to be cautious.”