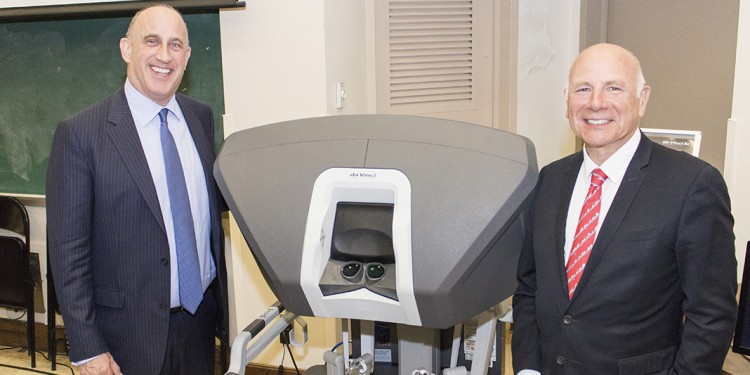 Michael Flinker (left) and Jean-Luc Trahan, prostate cancer survivors, with the type of console used in the robotic surgery that they believe saved their lives.

Robot-assisted surgery has become so effective that, figuratively speaking, it transforms elderly and obese patients into younger, slimmer individuals with lower surgical risks, a national conference at the JGH has been told.

Dr. Walter Gotlieb, Director of the JGH Division of Gynecologic Oncology, said all of the factors that present potential risks in surgery—such as blood loss, surgical complications, the length of the operation, and time spent in the hospital—are higher for patients over the age of 70.

However, when the robot is used, “it is as though robotics allows us to equalize the risk factor that’s associated with age,” Dr. Gotlieb explained. Similarly, he added, “it’s as though the robot neutralizes the risks” of obese patients who might not otherwise be suitable candidates for surgery.

Speaking in the Block Amphitheatre on June 13, Dr. Gotlieb was among several presenters at the JGH’s first-ever conference on robotic surgery, which featured an audio/video hookup to participants in Ottawa and Alberta.

Dr. Gotlieb said that in his division, results have been compared for surgery before and after the JGH acquired the surgical robot in 2008. The data shows that over a nine-year period:

Dr. Gotlieb added that since the launch of robotics at the JGH, the cost per event-of-care for ovarian cancer has decreased by $9,000, for cervical cancer by $4,000, and for endometrial cancer by $3,000. He estimated that during the nine-year period, for various types of gynecologic cancer, the use of the robot has saved the JGH a total of $3.5 million (excluding the cost of buying the robot, which was borne by the JGH Foundation).

Dr. Gotlieb and his JGH colleague, Dr. Susie Lau, are among the few surgeons in North America who currently perform an advanced type of robotic surgery for gynecologic cancer, in which all of the medical instruments are inserted into the abdomen via a single, tiny incision in the navel. These operations have been conducted at the JGH since December 2017.

According to Dr. Lawrence Rosenberg, President and CEO of CIUSSS West-Central Montreal, the surgical robot is an amazing piece of technology, but “there is no escaping one fundamental fact: It is a tool.

“It may be far removed from the low-tech realm of humble objects like scalpels or clamps, but it is a tool, nonetheless. It deserves to be the focus of our attention only to the extent that it serves as the means of easing a patient’s pain and improving the quality of his or her life.”

Dr. Rosenberg, who emceed the conference, said he is “eager to know what marvels await us just around the corner. However, the future that really matters is what life will be like in the future of each patient in the weeks, months and years after the surgical robot has done its job.”

As examples of what robotic surgery can mean to patients, the audience heard personal stories from two Montrealers who had undergone procedures for prostate cancer. Michael Flinker described his decision to refuse conventional open surgery in 2009, because the robot was not yet available at the Montreal hospital where his surgeon practiced.

Instead, Mr. Flinker travelled to Celebration, Florida, for the operation, which went so well that he was discharged from the hospital within 24 hours and, two days later, he was able to walk at least two miles. After nine weeks, he overcame his incontinence, and erectile dysfunction became “a virtual non-issue.”

Mr. Flinker noted that he was lucky to have had the means to pay for the trip and the operation, but he wonders about Canadians whose hospitals still do not have the funds for a robot. “It’s imperative that we stress to the government the importance of the robot—it’s critical,” he urged. “And it’s imperative that they listen to the patients, because the results are there.”

Jean-Luc Trahan, who underwent robotic surgery in 2010, agreed that “the government really has to make a decision.” Mr. Trahan added that for him, the robot delivered on its potential to enable him to return home quickly, recover promptly and get back to work with minimal delay.

Also featured at the conference: