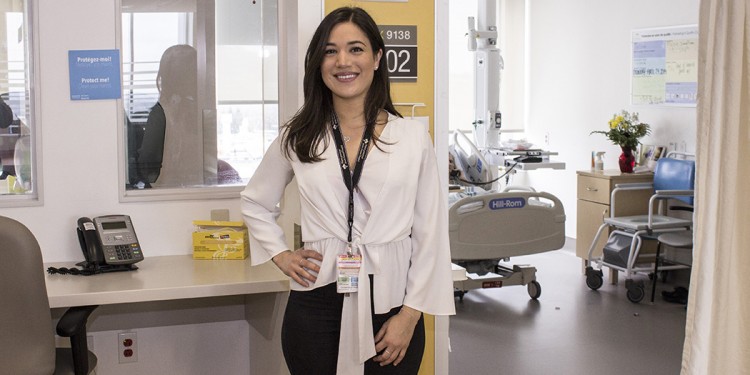 The rate of screening for delirium in hospitalized patients over the age of 75 has risen sharply at the JGH since 2017. This has led to a greater likelihood that underlying medical conditions are promptly diagnosed and treated, while substantially lowering the risk of functional or cognitive decline in those patients.

Progress has largely resulted from intensive awareness-raising efforts among JGH staff in a program known as the Specialized Approach to Senior Care (AAPA). It was introduced by the government to upgrade the quality of care for elderly patients, not just in Geriatrics, but anywhere in the hospital that they receive treatment or care.

According to Nurse Elisabeth Laughrea, who coordinates the AAPA, an audit in February 2019 found that 82 per cent of hospitalized patients over 75 were screened for delirium, up from just 10 per cent in 2017. Ms. Laughrea calls this “a huge improvement” that contributes to patients’ well‑being and helps to reduce the odds of prolonged institutionalization.

While delirium is generally detected in 30 per cent of the hospitalized elderly, it can sometimes surge as high as 75 per cent in the ICU and in the Medical and Surgical Units, Ms. Laughrea says.

Front and reverse of a card used by nurses since 2019 to screen elderly hospitalized patients for delirium.

The average person might mistake delirium for dementia, since both conditions may sometimes be characterized by confusion, aggressiveness and agitation.

However, unlike dementia (which is a progressive disease), delirium is an acutely disturbed state of mind that can be triggered by dehydration, metabolic changes, infection, immobilization, surgery, or changes in environment, medication or the sleep/wake cycle.

In another striking contrast with dementia, delirium causes some patients to acutely lapse into a stupor or to sleep for extended periods of time.

In certain instances, Ms. Laughrea explains, delirium can be a symptom of an underlying medical condition, such as a hemorrhage or a urinary tract infection. Once the medical problem is treated, the delirium often diminishes or disappears.

Delirium can even be caused by hospitalization itself, owing to the drastic changes that the patient experiences in transferring from home to hospital. The need to prevent and treat these complications among the elderly was a key factor in developing the AAPA guidelines.

At the moment, screening is almost always conducted by a nurse, but Ms. Laughrea is hoping to expand the process to involve various allied health professionals, such as social workers and physiotherapists.

The person who conducts the screening refers to a CAM (Confusion Assessment Method) card, which summarizes the four main categories of delirium, as well as suggesting ways of determining whether delirium might be present:

If delirium is found to be present, Ms. Laughrea says, the use of drugs is discouraged, since they can sometimes prolong delirium. Drugs are administered only if the patient is in danger of becoming self-destructive.

Instead, the patient’s care is adjusted in other ways—for instance, by stimulating the patient physically and cognitively; removing any intravenous or other tubes that are not absolutely essential; promoting continuity and familiarity by assigning the same nurse to care for the patient; keeping the patient well hydrated at mealtime and between meals; and encouraging family members to visit regularly and bring the patient familiar items from home.

Ms. Laughrea credits the improvement in screening to many factors, including support by Linda Alfonso, the Senior Nurse Advisor in Geriatrics. In addition, the AAPA team spent a full week last fall raising awareness of delirium among JGH healthcare professionals, with updates provided since then on a regular basis. And in January 2018, the CAM score was added to the document in which vital signs are recorded and posted in patients’ rooms.

“By working together, we’re hoping to make a significant difference in the lives of our elderly patients,” says Ms. Laughrea, “and we won’t be satisfied until the screening rate goes even higher.”

From the archives: JGH test for early detection of dementia goes into world-wide use