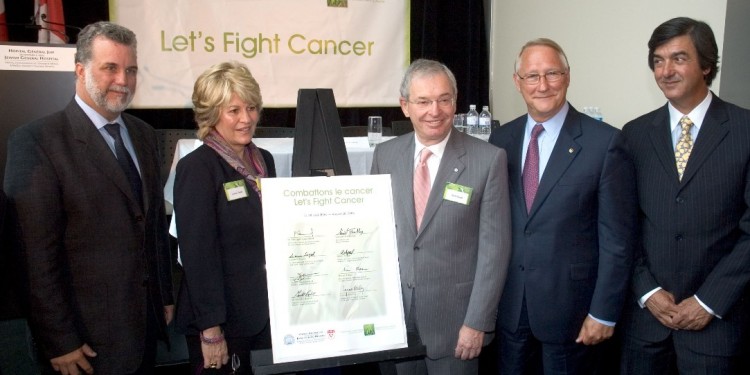 At a 2006 press conference to inaugurate the Segal Cancer Centre, among those who signed a declaration to support the battle against cancer were (from left) Philippe Couillard, Minister of Health and Social Services; Leanor Segal; philanthropist Alvin Segal; Gérald Tremblay, Mayor of Montreal; and Henri Elbaz, JGH Executive Director.

In 2006, Health and Social Services Minister Philippe Couillard visited the newly completed Segal Cancer Centre to express his admiration for the JGH’s leadership in providing patients with a fully integrated system of cancer treatment and care.

“It is clear that an institution with the sort of expertise that the Jewish General Hospital has developed will be called upon to play an extremely important role in our integrated plan to fight cancer,” Mr. Couillard said at an August 28 press conference in the Segal Cancer Centre. “The work that his being accomplished by teams of professionals, as well as the resulting clinical advances, are of significant benefit to patients.”

Impetus for construction of the $55.9 million centre came in 2003 in the form of a remarkable $20 million gift from Leanor and Alvin Segal and their family. This was followed in mid‑2004 by the provincial government’s $23.9 million commitment, which enabled construction to begin shortly afterward on 8½ new floors atop Cummings Pavilion E. The remaining construction costs were covered by the JGH Foundation and other partners.

Montreal Mayor Gérald Tremblay praised the extraordinary efforts of the hospital’s supporters “who really care and are willing to do everything humanly and financially possible. I thank everyone who agreed to take on this new challenge. You will certainly succeed in making it a model of its kind.” Turning to the Segals, Mr. Tremblay added, “You now rank among the builders of our great city.”