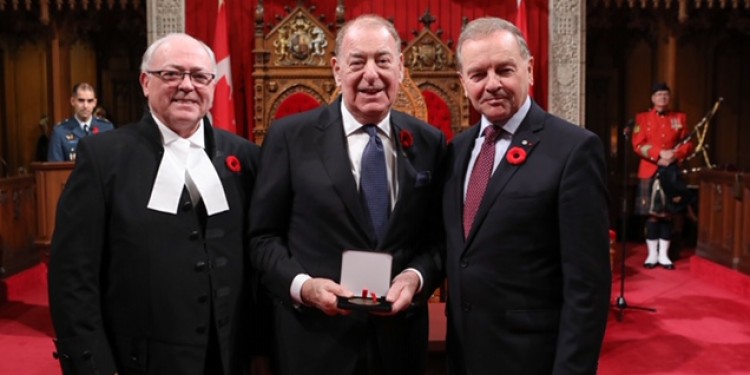 In the Senate in Ottawa, Bernard Stotland (centre) received a 150th Anniversary Medal on October 31 from the Speaker of the Senate, the Honourable George J. Furey (left), and Senator Serge Joyal.

Former JGH President honoured for leadership as philanthropist and volunteer

Bernard Stotland, President of the JGH Board of Directors from 2009 to 2011, has been honoured with a 150th Anniversary Medal by the Senate of Canada, in recognition for his achievements as a leader at the hospital and his support for arts and cultural organizations in Montreal.

The medal was presented on October 31 in Ottawa by Senator Serge Joyal, who wrote in his letter of congratulations that Mr. Stotland has been honoured for “the amazing work that you have done throughout the years in the service of the improvement of our fellow citizens’ life conditions and the well-being of the community.”

“Throughout my life, it has been my great joy and my privilege to find ways, whether through philanthropy or by providing leadership, of making good things happen for those who deserve a break,” Mr. Stotland says.

“But even in this respect, I believe that most of the credit goes to the countless individuals in the exemplary organizations that I’ve worked with in the fields of health care, music, business and religion. I simply served as a focal point for their accomplishments, much as a coach might function in preparing a team for the Olympics.

“Of course, there are no medals for coaching at the Olympics, but I feel as if I have won gold, silver and bronze.”

After beginning his career in chartered accountancy in 1957, Mr. Stotland became a co‑founding partner in 1964 of Wasserman Stotland Bratt Grossbaum, later known as WSBG. From 1989 to 2008, he served as a senior, full-time consultant to that company. In 2007, he was named a Fellow of the Order of Chartered Accountants of Quebec.

Mr. Stotland’s ties to the JGH were forged in 1999, when he approached the JGH Foundation and volunteered to work as a fund-raiser on the newly launched Capital Campaign. At the same time, he offered to sit on the hospital’s Finance and Audit Committee.

As a result of these and other achievements, Mr. Stotland was accorded the JGH’s highest honour, the Distinguished Service Award, presented at the Annual General Meeting in 2013.

In the cultural sphere, Mr. Stotland began raising funds in the mid-1980s for l’Opéra de Montréal and the Canadian Vocal Arts Institute. In 2002, he started rehearsal performances of l’Opéra de Montréal for students who were bused in from numerous schools in the greater Montreal area. He was also a member of the Board of Directors from 2003 to 2008, and was elected President in 2014.

As a staunch supporter of the Canadian Vocal Arts Institute (which nurtures the emerging careers of young opera singers), Mr. Stotland negotiated a contract with the University of Montreal, in which the Institute became resident at the university.

He served as the Institute’s Treasurer from 2005 to 2008, with a term as President that began in 2014. His efforts helped students from the Institute to receive the rare opportunity of being coached by instructors from the Metropolitan Opera of New York.

In addition, during the 1990s and 2000s, Mr. Stotland played a prominent role at the Shaare Zion Congregation. He has received the David Ben Gurion Award for leadership from State of Israel Bonds, and in 2006, he was honoured with a Jewish Community Foundation award for dedication.