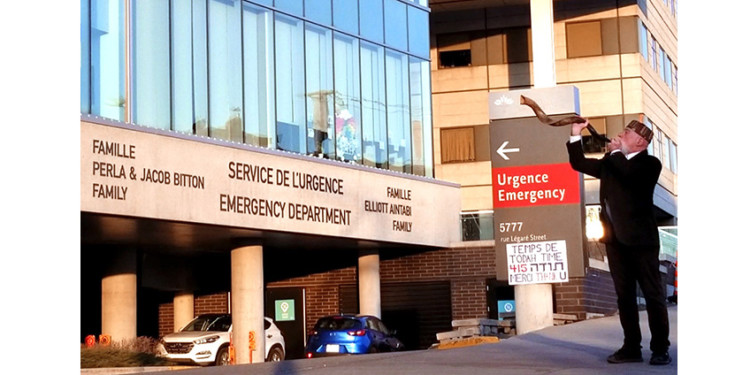 On the sidewalk outside Pavilion K, Cantor Henry Granek blows a kudu shofar, whose sounds are offered as a non-verbal thank-you to healthcare workers fighting the coronavirus.

The sound of a ram’s horn, normally heard in synagogues in September to mark the Jewish New Year, now fills the air almost every day outside the JGH’s Pavilion K, as an expression of gratitude to healthcare providers fighting the coronavirus (COVID‑19).

Weather permitting, Cantor Henry Granek can be found on Légaré Street around 4:15 p.m. on most days (except Saturday, the Jewish Sabbath), using the tones of the ram’s horn—known in Hebrew as a shofar—to convey emotions that words cannot always articulate.

“We hear about people saying thank-you by honking their car horns or singing on their balconies, and I felt I had to do something similar, but with a uniquely Jewish flavour,” says Mr. Granek.

“Like everyone, my thoughts and prayers are with those who are ill and with those who are taking care of them. But I want to go a step further. The sound of the shofar is a call to action, sometimes on a personal basis, but also collectively. That’s why I’m hoping that in addition to saying ‘Thank you’, it will inspire people to act during this time of crisis.”

Mr. Granek, who has travelled frequently to serve as a cantor in small congregations in Quebec, elsewhere in Canada and in the United States, began blowing the shofar on the sidewalk on April 20, after first checking with police to be sure he is permitted to do so on public property.

“All who dwell on the Earth are responsible for the welfare of one another.”

He also spoke with JGH staff from Security and from Infection Prevention and Control, who told him they had no objections, as long as he maintains the recommended safe distance from other people.

In blowing the shofar, Mr. Granek produces three types of traditional sequences of notes: a single blast (which is sometimes lengthened), a series of three short blasts, and a series of 14 staccato notes. To Mr. Granek, each sequence symbolizes different groupings of healthcare workers.

Although the sounds are often emitted by a common ram’s horn—relatively straight and about 30 centimetres (12 inches) in length—Mr. Granek also uses a more impressive and visually arresting kudu shofar, the spiral horn of an African kudu antelope, which is 80 centimetres (32 inches) long.

While this has resulted in raised eyebrows and looks of bewilderment among some passers‑by, Mr. Granek says it has also become an ice-breaker for conversations with people who are curious about certain aspects of Judaism. To those already familiar with the shofar, it has been a source of spiritual comfort, he adds.

Mr. Granek says his daily presence outside the JGH further strengthens his connection to the hospital where he was born, had his broken arm set in a cast before his bar-mitzvah, had retinal surgery that saved his eyesight, and received excellent care for his mother during her 7½-year battle with Alzheimer’s disease.

Anyone who wants to hear Mr. Granek blow his shofar should come to sidewalk near the Pavilion K entrance around 4:15 p.m., when many members of staff change shifts and are most likely to hear the musical blasts.

He explains that his choice of 4:15 is also tied to gematria, a somewhat mystical Jewish system of numerology, in which a value is assigned to a name or a word, based on the value of each of its letters. Using this calculation, 415 is the numerical value of the Hebrew words for “thank you” (todah) and “action” (ma’asseh).

Mr. Granek hopes to keep coming to the JGH until the crisis has passed, in order to show solidarity with patients and staff who have been affected by the pandemic. “Within the Jewish community, I’ve lived my life by the Talmudic axiom of Kol Yisrael areivim zeh bazeh—all Jews are responsible for one another’s welfare.

“But now, more than ever, I believe that it’s appropriate to reword that phrase to say, Kol yoshvei tevel areivim zeh bazeh— all who dwell on the Earth are responsible for the welfare of one another.”