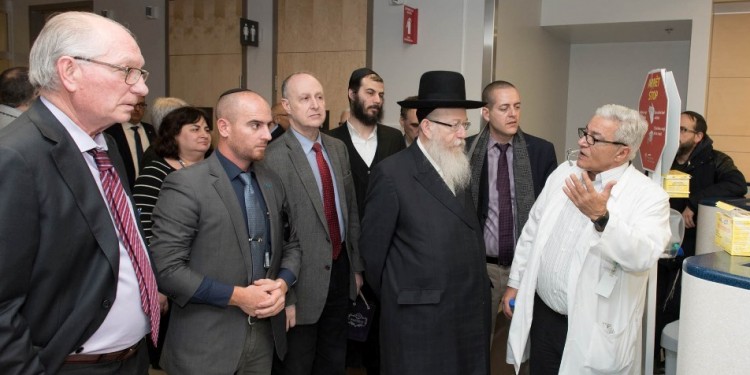 Canadian and Israeli strategies for controlling budgets and reducing waiting times were compared and explored on November 23, 2016, during a visit to the JGH by Rabbi Yaakov Litzman, Israel’s Minister of Health.

Montreal was one of the stops on Rabbi Litzman’s North American tour, which included Montreal, New York and Philadelphia. The goal was to explore best healthcare practices in some of the leading hospitals in Canada and the United States.

“Those who think they know it all don’t really know anything,” Rabbi Litzman told a group of about 15 people, as he was shown through the Segal Cancer Centre and the Emergency Department. “That’s why I’ve joined you today—to learn from you and report back about ideas that would benefit the citizens of Israel.”

Dr. Gerald Batist, Director of the Segal Cancer Centre, noted that research has been greatly enriched as a result of numerous, time-honoured exchanges in science and medicine between Canada and Israel.

Dr. Lawrence Rosenberg, President and CEO of CIUSSS West-Central Montreal, added that he favours strengthening the ties between the two countries. “We have a long-standing tradition of welcoming Israeli residents and researchers,” he said. “I hope we can increase these exchanges during your term of office.”

Among those accompanying the minister on his tour of the JGH were Alan Maislin, President of the CIUSSS Board of Directors; Ziv Nevo Kulman, Israel’s Consul General in Montreal; and Sydney Benizri, Director of Canadian Magen David Adom, Israel’s national ambulance and blood donor service. Rabbi Litzman took advantage of his trip to Montreal to help celebrate the 40th anniversary of Canadian Magen David Adom.

Apps have potential for a role in mental health care, conference told