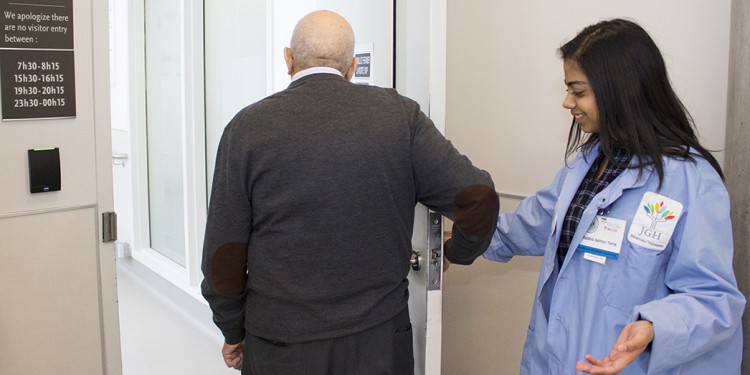 One summer day last year, Rabbia Akhtar-Tariq, a McGill University psychology student, was volunteering in the JGH’s Medical-Surgical Intensive Care Unit (MSICU), when she was introduced to a patient who ended up making a lasting impression on her.

Since she spoke Urdu, Ms. Akhtar-Tariq was asked to help communicate with the patient who was in her 50s and had no family or loved ones to help her.

What slowly grew between them was a deeper relationship than Ms. Akhtar-Tariq would ever have believed possible—a key reason for her decision to return this summer for her third stint in the MSICU, even with all of its heavy emotional demands.

During her shifts, Ms. Akhtar-Tariq would listen to the patient and comfort her, as she opened up, detailing her history of trauma and abuse.

“You’re my child, you’re my baby,” the woman would tell her.

“She had this yearning for a human connection,” Ms. Akhtar-Tariq now recalls. “I became like a family member to her.”

Sometimes, Ms. Akhtar-Tariq would daydream about taking the patient out for walks, once she was stable enough, so she could feel the warmth of the sun again.

“One of the doctors would tell me, ‘Every time you come into the room, there’s a glow on her face,’” she remembers. “It was as if I breathed life into her.”

More about the ICU Bridge Program

The program was created by McGill University students Adamo Donovan and Milanka Stevanovic, alongside Dr. David Hornstein, an internist and intensivist at the Montreal General Hospital.

Interested students must apply to the ICU Bridge Program through the program’s executive team. A CV and cover letter are required.

Learn more about the program.

Sadly, after a month, the woman passed away. Which is how Ms. Akhtar-Tariq came to attend her first funeral. “She changed my perspective on life,” she says. “At my age, you don’t often meet someone who’s dying. The idea of death usually seems so far away.”

When Ms. Akhtar-Tariq, 23, returns to the MSICU as a student volunteer, she will be part of the ICU Bridge Program, first implemented at the JGH in fall 2016.

“The goal is to literally create a bridge between the family members, who are waiting outside in the family room, and the people inside the MSICU,” explains Susan Cameron, Nursing Educator at the MSICU.

“The program enabled me to discover my emotional strength,” Ms. Akhtar-Tariq says, adding that she now also serves on its marketing team. “I never thought I’d be able to handle such emotional situations.”

“The program enabled me to discover my emotional strength.”

In most cases, student volunteers are responsible for assisting ICU visitors, rather than patients. Whether greeting visitors, escorting them to their loved ones, or showing them the way out, they ensure that families feel comfortable and safe.

As a locked unit, the MSICU can be accessed only by family members who use the phone outside the unit, but this can be intimidating, adds Ms. Cameron. Having volunteers present makes the process easier, since a student’s ID card provides access.

“At first, I was amazed to see how people opened up emotionally to a volunteer,” says Ms. Akhtar-Tariq. “They would come back the following week and thank me for listening. I never realized how much that could mean to them.”

This semester, 58 university students were assigned to the JGH’s MSICU. They work in pairs for four-hour blocs, from 8:00 a.m. to midnight, seven days a week. Three hours of the shift are spent helping families, and during the remaining hour, the student can shadow any team member of the MSICU.

“They get to watch whatever we’re doing,” says Ms. Cameron, who also hosts an orientation and training session for the groups at the beginning of the volunteering semester. “Whether it’s a massive transfusion protocol or medical rounds, they’re allowed to be there and ask questions.”

In particular, Ms. Akhtar-Tariq enjoyed observing the multidisciplinary rounds. “The whole staff comes together to focus on patient care,” she says. “I love that about the staff here: Everyone supports one another and works collaboratively. I always wondered how the ICU deals with all of the emotion, and now I realize they’re each other’s strength.”

Having the students around also makes the MSICU team stronger, says Ms. Cameron. “They’re such a big help. We notice it when they’re not there. They’ve become a part of our team.”

A heartfelt memento for grieving families