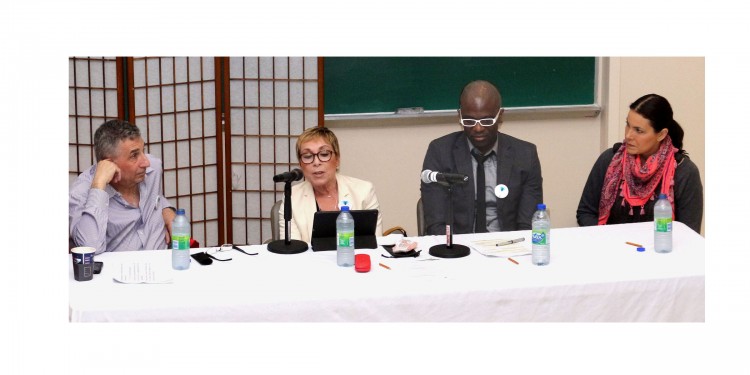 Reading aloud from notes on her laptop, Laurie Greenspoon (second from left) describes her experiences as a cancer survivor. Paying close attention are other survivors and speakers in the Hope & Cope program, (from left) Leonard Miller, Daniel Opoku and Maude Schiltz.

For nearly two hours, they spoke from the heart about the deeply personal ways in which cancer had shattered, up-ended and utterly transformed their lives: the shocking surprise of diagnosis … the disfiguring mastectomies … the terrified bewilderment of their children … the breakdown of a marriage … having to spend every waking minute consumed with thoughts of illness or treatment …

Yet, against all odds, by the end of the evening, the mood in the JGH’s Block Amphitheatre was one of defiance, pride, determination—and perhaps even a few moments of exhilaration. What could easily have descended into introspective regret became, instead, a reclamation of optimism during Hope & Cope’s annual gathering to celebrate the survivors of cancer.

As the four speakers reminded the audience of 120 this past June, being a survivor does not necessarily mean anyone is “home free”: Anything can go wrong at any time. Still, they said, being a survivor counts for something, means something, holds out the promise of something. Better to celebrate being alive in the present than to persist in condemning the past.

Laughter, which regularly punctuated the remarks of all four speakers, was most sustained when Maude Schiltz, a mother in her late 30s, explained how she fought back against the hair loss of chemotherapy by buying more than 40 cheap wigs in a dizzying array of colours and styles. And just for good measure, she adorned herself with the tattoo of a snake that coiled lazily around her once-bald scalp.

On a more serious note, Ms. Schiltz, who is in remission after a double mastectomy, recalled that one of her toughest tasks was providing emotional support for her daughter and son who were 5 and 9, respectively, at the time of her diagnosis. When she broke the news about her illness, she said, her children instantly realized that “mom and dad, who seemed invincible, could be dead tomorrow morning.”

To ease the blow, Ms. Schiltz pre-empted the side-effects of her chemotherapy by giving clippers to her children and inviting them to shave her head. As difficult as this was, Ms. Schiltz says she is convinced it was better than having her traumatized kids watch helplessly as her hair slowly fell out, strand by strand.

For 62-year-old Leonard Miller, being a survivor has motivated him to become a cyclist and participant in the 2014 Enbridge Ride to Conquer Cancer. “I figure that if cancer wants to get me, it’s gonna have to catch me first,” he said with a smile.

Mr. Miller noted that since he now appears to be in good shape, he understands why he is occasionally told he looks good for someone with cancer. “But it makes me wonder: What is someone with cancer supposed to look like?” he asked. “I hope people realize that we are not defined by cancer. It’s just something we have.”

Welcoming each new day is what Laurie Greenspoon said she looks forward to, especially since she was given only 18 months to live after being diagnosed with breast cancer in 2003 at the age of 54. She attributed her longevity to highly effective medication, as well as complementary forms of therapy, including a hypnotist who helped her through various treatments, and a homeopath-acupuncturist healer whom she has been seeing regularly for 11 years.

“Cancer has a way of consuming your thoughts and daily existence,” she explained. “It’s always there. Even on a good day when you’re strolling along or smiling or walking your dog, cancer is by your side.”

Especially unsettling for Daniel Opoku was having to completely revise what he expected of himself, as well as what society expected of him, as a man in his 30s. This was supposed to be a time when he focused on his career or enjoyed travelling, he explained. But after being diagnosed in 2011 at the age of 34 with a pancreatic tumour that metastasized to his liver, Mr. Opoku had to change his expectations about his own independence and self-sufficiency.

What he learned, he said, was that there is something very special in being able to depend on the love and assistance of others—not just individuals, but organizations like Hope & Cope. “These are people who have been there to support me not only during the low periods, but when I have those good moments, those high moments, as well. They were there for me to share in that and encourage me.”

According to Hinda Goodman, Hope & Cope’s Survivorship Program Coordinator, the annual survivorship evening has been held for more than 25 years, because it delivers a unique combination of encouragement and straight talk from those who have battled cancer.

“The basic message is that often, cancer isn’t death,” says Ms. Goodman. “This event is a reminder that there are always good stories to be told and that life is worth celebrating. There are now so many millions of cancer survivors that, in some ways, certain forms of cancer resemble a chronic disease that you can overcome and live with through a full and rewarding life.”