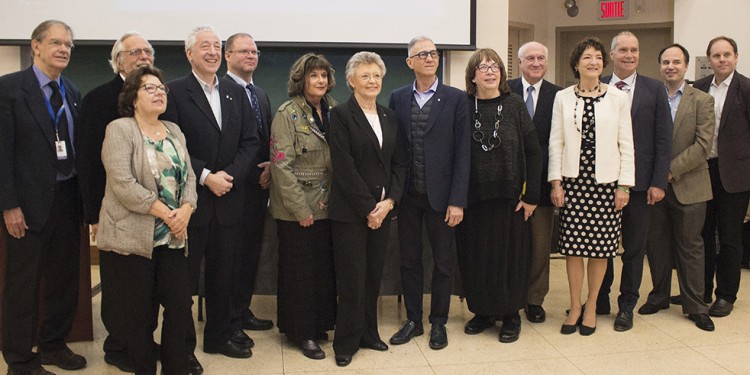 Participants and organizers of the JGH symposium on emerging and complex infectious diseases gather to honour the late Dr. Mark Wainberg.

Annual event will focus on emerging and complex infectious diseases

A photo of the late Dr. Mark Wainberg remained at the front of the Block Amphitheatre throughout the symposium.

At a symposium honouring the late Dr. Mark Wainberg, the pioneering HIV/AIDS scientist was fondly remembered as someone who was equally at ease in a lab coat (for research), a business suit (in dealing with politicians and pharmaceutical companies) and a T-shirt (worn while listening intently to the concerns of individuals affected by the disease).

“Mark understood that science has to have an element of integrity, and it has to have a moral and ethical conscience,” Dr. Bluma Brenner told an assembly of some of the world’s leading HIV/AIDS researchers, who gathered on November 2 in the Block Amphitheatre at the JGH.

As one of the world’s pre-eminent experts on HIV/AIDS and its treatment, Dr. Wainberg, 71, was the recipient of numerous international honours—including the Order of Canada and the Order of Quebec—for his indispensible work, which included developing a drug that has been instrumental in saving millions of lives around the world.

In addition to numerous researchers from across Canada and the United States, the symposium welcomed Professor Françoise Barré-Sinoussi of France, who received the Nobel Prize in Medicine in 2008 for her role in the 1983 discovery of HIV. Their attendance marked the inaugural meeting of what will be an annual symposium on emerging and complex infectious diseases.

Dr. Roderick McInnes, Director of the Lady Davis Institute (LDI) at the JGH and Acting President of the Canadian Institutes of Health Research, called Dr. Wainberg’s passing “a tremendous loss to all of us. We feel it every day. The LDI has become known around the world not only for the research that we do here, but because of Mark’s public and private advocacy for changes in political policies related to HIV.”

Dr. Serge Marchand, Scientific Director of the Quebec Research Fund – Health Care, recalled that early in his career, he was working at the University of Quebec in Abitibi-Temiscaming, where Dr. Wainberg had been invited to speak. Dr. Marchand was convinced that a scientist of Dr. Wainberg’s stature would not travel to a relatively small institution so far from Montreal.

However, to Dr. Marchand’s surprise, Dr. Wainberg not only showed up, but was genuinely interested in the work the university was doing. “As was his habit, he spoke passionately about the need to bring treatment for HIV/AIDS to the world,” Dr. Marchand said.