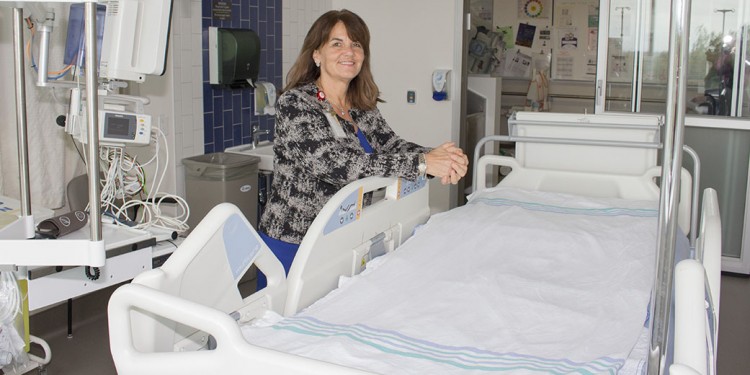 Jacki Raboy Thaw stands beside the type of therapeutic bed that was transported from the JGH to Mount Sinai Hospital to fulfill the Magic Moment of a Palliative Care patient.

Quick thinking and tight teamwork by dedicated staff at Mount Sinai Hospital and the Jewish General Hospital were crucial in granting a wish for a dying patient: To spend her final weeks in comfort in a bed that best suited her needs.

Fulfilling the request was all the more difficult, because it came on Friday, May 19, just as the Victoria Day weekend was about to begin. But that evening, the woman in her mid-50s finally breathed a sigh of relief, as she eased into the bed at Mount Sinai. It was in this bed that she died a month later.

“She was so appreciative of everything that was done for her, and on such short notice,” says Carol Steadman, Administrative Processes Specialist for the Volunteers of Mount Sinai Hospital and the MAB-Mackay Rehabilitation Centre. “Whenever I visited her, all she could talk about was that bed. It gave her such peace.”

What Ms. Steadman also found so encouraging was the immediate cooperation of staff. “As soon as I explained what I needed, then—bang!—they got going.”

“Whenever I visited her, all she could talk about was that bed. It gave her such peace.”

When the patient first arrived at Mount Sinai from the JGH, she felt that her bed, though perfectly suitable for palliative care patients, did not provide the same comfort that she had experienced before her transfer. At the JGH, she had lain in a Linet bed, sometimes known as “the Cadillac of hospital beds,” whose mattress’ firmness can be adjusted to accommodate an individual’s weight and preferences.

So she submitted a request to Magic Moments, a Mount Sinai program that fulfills wishes for palliative care patients whose prognosis for survival is three months or less.

Ms. Steadman turned to Jacki Raboy Thaw, a Nurse Coordinator in the Medical Surgical Intensive Care Unit at the JGH, who happened to know of a Linet bed that was vacant. She, in turn, sought help from Elliott Silverman, who is based at the JGH and serves as Director of Purchasing and Logistics for CIUSSS West-Central Montreal.

“What sticks in my mind,” he recalls,  “is that Jacki said the bed was needed not the next week, not sometime soon, but that very day.”

Isaac Maman (left), Elliott Silverman (centre) and François Lemieux gather at the JGH loading dock where they arranged to transport a special therapeutic bed to a patient at Mount Sinai Hospital.

Mr. Silverman worked closely with Isaac Maman, Chief of Logistics – Receiving and Warehousing, to have the bed moved from the ICU to the JGH loading dock. At the same time, François Lemieux, Chief of Logistics – Transport, arranged for transportation. The bed finally left the JGH  at 6:53 p.m. and arrived at Mount Sinai about 20 minutes later.

“What made it so wonderful,” Ms. Thaw recalls, “was not having to jump through hoops or come up against barriers in giving this patient what she wanted and needed. As soon as we asked, staff offered to help as much as they could.”

Similarly gratifying to Mr. Silverman was the determination of members of staff in both CIUSSS facilities to work as a single team to enhance the patient’s experience.

He says this incident also drives home the point that Purchasing and Logistics, like other departments that have no direct, hands-on contact with healthcare users, often makes a significant difference in the lives of those who require care.

“People sometimes forget that, in our own way, we do care for patients,” he explains. “It’s true that we move boxes all day, but it’s our way of providing critical support to those members of staff who administer the medications and apply the dressings.

“This particular case was especially rewarding, because it gave us a chance to be more closely and directly involved in making a patient feel better. As soon as we got the call, we dropped everything to help her. We never got to meet her and we never even found out her name, but it was worth every minute of effort to give her those extra minutes of comfort.”