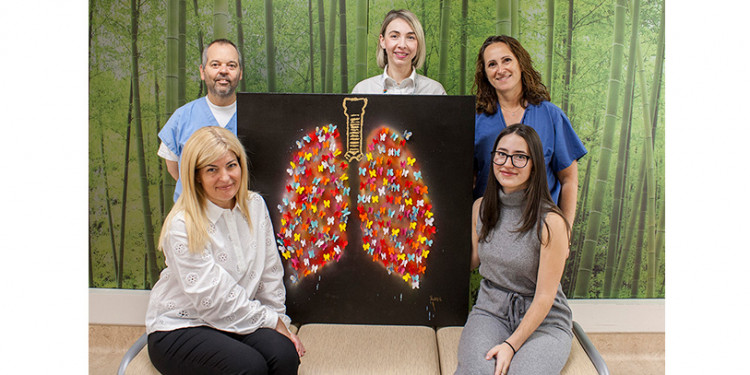 Artwork by Shelly Alkoby (seated, right) has been donated to the JGH’s Peter Brojde Lung Cancer Centre, where it is going on display. Joining the artist are her mother, Keren Elkoubi (seated), and (standing, from left) Dr. Jason Agulnik, Co Director of the Centre; Nurse Lindsay Hammond, a member of the team that has provided care to Ms. Elkoubi; and Dr. Carmela Pepe, Ms. Elkoubi’s respirologist. (Click on this or any photo to enlarge it.)

Early in the spring of 2021, Shelly Alkoby received the devastating news that her mother, Keren Elkoubi, had been diagnosed with stage 4 lung cancer.

That left her with a choice: She could live in a state of gloom, or carry on in the expectation that her mother’s treatment at the JGH would yield positive results.

But, she asked herself, what did that actually mean? Simply hoping for the best struck her as too passive a response. Was there something else she could she do? 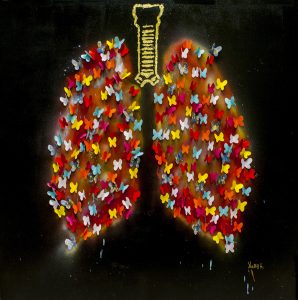 The artwork by Shelly Alkoby measures nearly one metre (36 inches) square. The painted canvas depicts stylized lungs that are studded with approximately 200 individually painted butterflies made of thin cardboard. Although the piece has not been formally named, Keren Elkoubi, the artist’s mother, refers to it as “Breathe Hope”.

Then fate intervened. Ms. Alkoby, who was 16 at the time, was enrolled in an international baccalaureate program in high school. That spring, she and her classmates were asked to complete a project of their choosing as a prerequisite for graduation. The only stipulation was that they had to learn a new skill or build significantly on an existing ability.

In an instant, Ms. Alkoby knew she would use the opportunity to create a heartfelt artistic expression of her feelings about her mother’s battle. The result, a colourful painting with a three-dimensional component, was so impressive that it is going on permanent display in the Peter Brojde Lung Cancer Centre at the JGH.

“I’ve always been drawn to art and I did smaller pieces in the past just for fun, but I never tried anything as large or as serious as this,” says Ms. Alkoby, 17, who is in the first semester of the health sciences program at Vanier College.

“The painting had three purposes. It represented what was going on in my personal life, it demonstrated my artistic abilities for school, and it was my way of thanking the Jewish General Hospital for everything that was being done for my mother.”

Ms. Elkoubi, whose condition has now stabilized, says of her daughter’s gesture, “It touched my heart that she chose to create something so beautiful.”

The artwork, which took two months to complete, measures nearly one metre (36 inches) square. Posed against a background of black acrylic paint is a pair of stylized and colourfully spray-painted lungs.

Covering them are approximately 200 butterflies made of thin cardboard, each individually cut and hand-painted. Leading into the lungs is a fanciful gold-leaf trachea.

Although the artwork does not have a formal name, Ms. Elkoubi refers to it as “Breathe Hope.”

Your support is vital in the fight against lung cancer

To maintain its effectiveness and its ability to respond to patients’ needs, the Peter Brojde Lung Cancer Centre relies on support from the JGH Foundation and its generous donors.

By making a donation to the Foundation, you can help numerous patients in their fight against lung cancer. When you donate, simply request that your gift be directed to the Brojde Centre.

Confident that other patients would be similarly uplifted by her daughter’s work, she approached her JGH respirologist (lung specialist), Dr. Carmela Pepe, in fall 2021 and proposed that the painting be donated to the Brojde Centre where it would be hung.

“I thought that was a wonderful idea, because it’s gorgeous—the colour, the life and the whole impression it creates,” says Dr. Pepe, who is a sub-specialist in pulmonary oncology. “Using butterflies was such a sweet way of imagining life and movement in every breath.”

“My hope is that when people see this painting, they’ll feel the same as my mother about what they’re going through, and their outlook will brighten.”

However, the actual transfer of the painting was postponed until this fall to allow time for Ms. Elkoubi’s treatment to progress and for some of the more stringent COVID-19 restrictions to be eased. The painting was presented to Brojde Centre in November, which is Lung Cancer Awareness Month.

Ms. Elkoubi, whose parents both died of cancer relatively recently, notes that she contracted lung cancer despite never having smoked. For this reason, she is raising awareness among healthcare professionals by urging them to be alert to the possibility of lung cancer in their non‑smoking patients.

Ms. Elkoubi is also encouraging members of the public not to stigmatize those who have lung cancer, since a signficant number of them have never smoked. She strongly suggests that even non-smokers be screened for the illness; in this way, if cancer is detected, the fight can begin as early as possible and the odds of overcoming the disease are higher.

“The whole team here has been wonderful,” she says, “but I was especially blessed to get Dr. Pepe as my doctor. Her approach is to put the patient at the centre. Dr. Pepe listens carefully and she’s open to other opinions, which is what happened when we contacted specialists in Israel and the United States. She’s been a real warrior on my behalf.”

Ms. Alkoby adds, “My hope is that when people see this painting, they’ll feel the same as my mother about what they’re going through, and their outlook will brighten.”