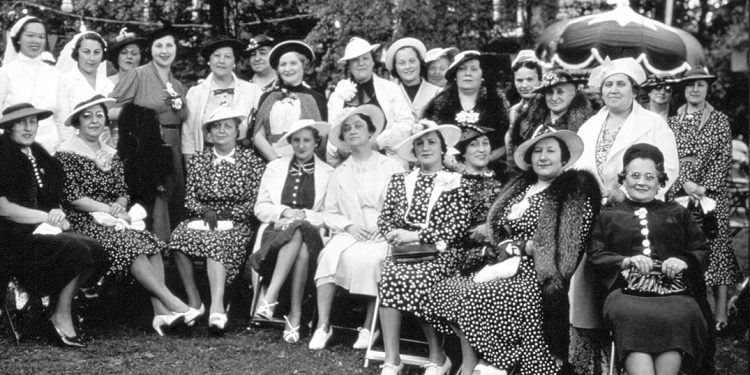 When the Jewish General Hospital opened in 1934, it had two crucial, ongoing needs: a steady source of funding to purchase medical equipment and supplies, and a pool of dedicated volunteers. Both were delivered by the Women’s Auxiliary (later known as the JGH Auxiliary), which flourished under its founding President, Annie Goldbloom, who served from 1936 to 1948.

The Auxiliary played a pivotal role by raising funds long before the JGH Foundation was created, and by providing much-needed services on a volunteer basis before the Department of Volunteer Services came into being. It continues to live up to both of these major responsibilities to this day.

In 1936, two years after the JGH opened, the Women’s Auxiliary was born and its creation was marked at a gala garden party. Before long, it had a membership roster of 1,850 (rising to nearly 2,600 by 1945) and blossomed into one of Montreal’s most successful organizations of its kind.

Under Mrs. Goldbloom, it established numerous funds and committees. The most important, the Life Saving Fund, ensured that all patients, regardless of their ability to pay, received medical necessities such as drugs and blood transfusions. This committee also bought equipment such as iron lungs, oxygen tents and x-ray machines.

In addition, the Women’s Auxiliary raised funds to purchase linens, surgical dressings, books for the medical library and layette packages (diapers, sweaters, bonnets, booties and blankets) for the needy mothers of newborns. After World War II, with the arrival of many Jewish refugees, the Women’s Auxiliary provided newcomers with translators, counselling, emotional support and financial aid.

From the archives: A time to celebrate