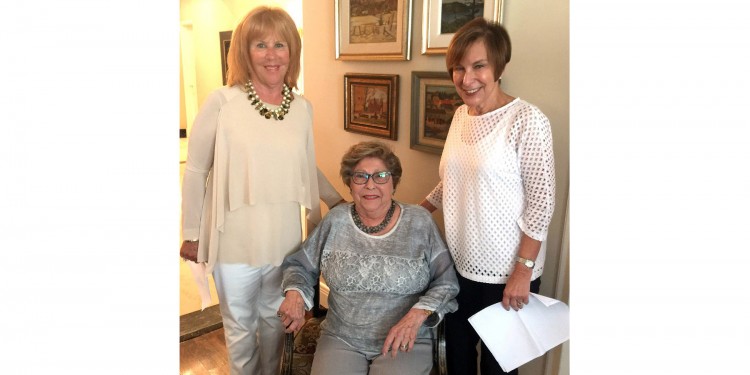 The Auxiliary kicked off its 80th-anniversary celebrations on August 18 with a luncheon hosted by Bina Ellen (seated) at her home. Joining her were Auxiliary Co-Presidents Reisa Lerner (left) and Beatrice Lewis.

With the 80th-anniversary celebration of The Auxiliary now under way, we would like to express our deep gratitude to the many preceding generations of women whose hard work and dedication have enabled today’s Auxiliary to do so much for the patients of the JGH.

Our sights are set on helping those on the full spectrum of life—from the very youngest in Neonatal Intensive Care (through our Tiny Miracle Fund) to the oldest in the Hospital Elder Life Program. Many departments and divisions have benefited from The Auxiliary’s financial support, including Hemodialysis, Microbiology, Radiology and Pathology.

The Auxiliary’s presence is felt throughout the hospital and we continue to bring comfort, compassion and a much-needed smile to those who may be facing some of the most difficult days of their lives.

Dr. Apostolos Papageorgiou, JGH Chief of Pediatrics and Neonatology, expresses his delight at being reacquainted with a little girl who had been born prematurely at the hospital several years earlier. She was among dozens of former “preemies” who attended a reunion with their parents and staff on August 28.

A big “welcome back” for kids born prematurely

You’d never know it to look at them now, but the dozens of smiling, energetic children and young adults who recently flocked to the JGH experienced major medical difficulties in the first hours of their lives. All had serious problems due to their premature birth, with at least one of them weighing less than a kilogram (a little over two pounds).

Those difficult times were replaced by happiness at a reunion on August 28 to mark the survival of the former “preemies”. Their good health was celebrated by their parents and many of the past and current staff of the JGH Neonatal Intensive Care Unit.

A clown entertains children who had been born prematurely at the JGH and returned for a “preemie” reunion at the hospital.

The event— featuring food, games and entertainment for more than 200 people in the Agora of Pavilion K—was organized by The Auxiliary and Dr. Ermelinda Pelausa of the Department of Pediatrics and Neonatology. The Auxiliary is also the driving force behind the Tiny Miracle Fund, which assists in purchasing equipment for the Neonatal Unit.

Among the guests was former “preemie” Angelo Rizzolo, who was congratulated by Dr. Apostolos Papageorgiou, JGH Chief of Pediatrics and Neonatology, on his decision to become a doctor.

Angelo Rizzolo, who was born prematurely at the JGH, receives a neonatal stethoscope from Dr. Apostolos Papageorgiou and is congratulated on his decision to become a doctor. Mr. Rizzolo, a first-year medical student at McGill University, returned to the hospital on August 28 for a “preemie” reunion.

Mr. Rizzolo, a first-year medical student at McGill University, was presented with a neonatal stethoscope to encourage him in his studies. Members of Mr. Rizzolo’s family play an active role in the Vivo Fund, established in 1999 to raise money for Neonatal Intensive Care at the JGH.

Also honoured at the reunion was Debbie Basevitz, a long-time nurse who has retired from the Neonatal Follow-Up Clinic.

The Auxiliary’s support in upgrading the electronic security system of the Geriatrics Unit was acknowledged in a June email to staff by Dr. Ruby Friedman, JGH Director of Long Term Care Services, and Rita Di Girolamo, Head Nurse of Geriatrics.

“Thanks to the generosity of The Auxiliary, this new system addresses the security needs of our elderly patients who exhibit wandering behaviours,” the memo said.

It explained that the upgrade has made the Geriatrics Unit on 6 Northwest accessible only by access card (for the unit’s staff), intercom (for visitors), and keypad (for authorized staff, such as x-ray personnel and volunteers, who often enter the unit). The keypad code will also be given to the relatives of patients in the unit.

HELP is on the way

The Hospital Elder Life Program (HELP) has been established at the JGH, with support from The Auxiliary. Its participants are trained volunteers, who assist hospital staff in improving the overall care of geriatric patients, especially by minimizing their delirium and functional decline during hospitalization.