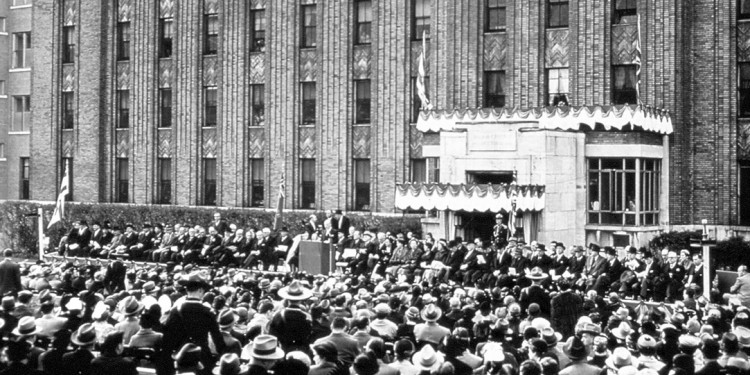 The Jewish General Hospital opened on Oct. 8, 1934, with a grand ceremony that was widely covered by the French and English press.

Lord Bessborough, the Governor‑General of Canada, who had broken the ground for construction of the JGH in 1931, returned in 1934 for the official opening, where he told the audience:

“Today an ornament to its city, a notable addition to that city’s social services, the Jewish General Hospital stands up fully equipped and fully staffed. It is more than that, too. It is a monument to that spirit of charity toward your fellow men which has always been the characteristic of Jewry throughout the world.

“I hope that this may be the beginning of a long and fruitful chapter in the history of that never-ending struggle which men of all races and all creeds are called upon to wage against sickness and suffering throughout the world.”

The proceedings were concluded by Montreal Mayor Camilien Houde, who expressed his gratitude in unambiguous terms:

“If there is one lesson, more than any other, which we have to learn from the Jewish community in Montreal, it is that of solidarity and community effort. Down through the ages, the Jewish people, for the most part in hardship and in bitterness of spirit, have survived as a race because they have known how to help those of their fellow-nationals who have been in trouble, in poverty and in illness.

“Montreal is facing problems of great moment. The calls on us are endless. The destitute have never stood more in need of help. For your initiative in financing and erecting this magnificent hospital, all of Montreal should be grateful to you.”