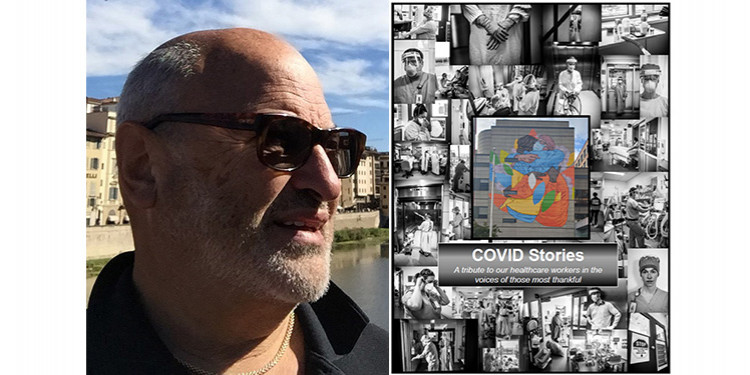 Brian Glazer, who was delighted with the care he received at the JGH when he was hospitalized with COVID-19, is among those whose experiences are described in COVID Stories, published by the JGH Humanization of Care Committee.

Publication collects dramatic stories about pandemic care at the JGH

Here’s how Brian Glazer finally convinced himself he was alive, after lying unconscious for 17 days in a COVID-19 isolation room at the JGH: Using his cellphone, he scrolled through the obituaries of a local funeral home until he was sure his name wasn’t among them.

“I was awake, but I was sure I had died,” Mr. Glazer recalls today, his voice shifting from bemused laughter to a solemn whisper and back again, as he reflects on his traumatic experience in April 2020 at the age of 73.

“What scares me is that I accepted it so readily, but it seemed to make sense at the time. After all, when I woke up, a creature from another world was standing over me in a helmet and goggles,” he says with a chuckle, remembering his first alarming impression of a nurse in a full‑face visor and heavy, head-to-toe protective clothing. 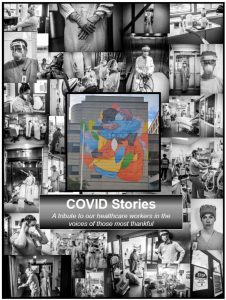 Cover of the publication of the JGH Humanization of Care Committee, COVID Stories: A tribute to our healthcare workers in the voices of those most thankful. (Click to enlarge.)

“Everything was so confusing and I couldn’t understand why I couldn’t move my arms or legs. I was in a room with glass all around it, so I could see people walking back and forth, in and out, like in the song ‘Hotel California’. And a line from the song kept going through my head: ‘This could be heaven or this could this hell.’

“I asked the nurse if I was really alive, and she said, ‘Yes, you are.’ But she couldn’t convince me. I said to myself, ‘I was a nice guy when I was alive, but maybe not the greatest guy. So this might be God’s punishment.’”

For the rest of the day and all through that night, Mr. Glazer lay fearful and immobile in bed, refusing to close his eyes. Then, on the second day, he suddenly remembered he had taken his phone to the hospital and he asked to have it brought to him.

By that point, he had regained limited mobility in one arm, so it was finally time for the acid test: “I leaned over my phone, punched in Paperman [Paperman & Sons funeral home], and looked for my name. When it didn’t appear, I knew at last that I was alive.”

The startling nature of Mr. Glazer’s ordeal—along with his sometimes darkly humourous view of it, and his effusive praise for JGH staff—is why his experience was chosen to be among the stories in a new publication from the hospital’s Humanization of Care Committee.

In addition to helping to upgrade the personal and emotional aspects of care at the hospital, the Committee brings attention to various aspects of the patient experience—including those that need improvement—and the role that staff play in providing care.

This has prompted the mid-March publication of the Committee’s COVID Stories: A tribute to our healthcare workers in the voices of those most thankful, whose launch coincides with the second anniversary of the initial COVID-19 lockdown in Montreal and across Quebec.

A pdf of the publication is available online. Members of the public can also read (but not borrow) a paper copy in the Health Sciences Library on the second floor of Pavilion A.

Contained in the slim, 23-page volume are the stories (in English only) of four survivors, as well as the memories of three women whose 80-year-old father lost his life to the virus. The storytellers discuss not only how COVID-19 affected them, but the vital and praiseworthy efforts of JGH staff during a time of great stress and uncertainty.

They’re angels, all of them—the doctors, the nurses, the orderlies, everyone. Around the clock, they were there for me.”

Mr. Glazer calls those who tended to him “angels, all of them—the doctors, the nurses, the orderlies, everyone. Around the clock, they were there for me. The care was exceptional the whole time I was there.”

In total, Mr. Glazer spent just over a month in hospital—from April 2 to May 5—and was discharged only after he could prove to a physiotherapist he had regained enough strength and control to walk the halls and use the toilet by himself.

When he initially arrived in the Emergency Department, Mr. Glazer was examined by a doctor and informed he would be kept overnight for observation. He was also asked to climb onto a gurney and wait for a hospital bed to become available.

But no sooner had he gotten comfortable on the gurney than he fell deeply asleep and remained unconscious for the next 17 days.That’s why, when Mr. Glazer finally awoke, he was under the impression he’d missed a day at the most. He was shocked to hear that Passover, which in his mind was coming up shortly, had already passed him by—all eight days of it.

Miracles amid the pain

Even so, he considers everything that happened at the JGH to be extraordinary. After he awoke, his kidneys were not functioning properly and he had to start dialysis, with no indication of how long this treatment might have to continue—possibly permanently.

“But after only a week on dialysis, there was another miracle,” he says. “They told me, ‘Your kidneys have kicked back in.’ Just like that! I was—and am—very thankful, believe me.”

Today Mr. Glazer is in good health, despite certain difficulties that he describes as bothersome but manageable. “Waking up still haunts me, though. I fall asleep easily enough, but when I wake up, I’d better know exactly where I am right away, or else I start to panic.” 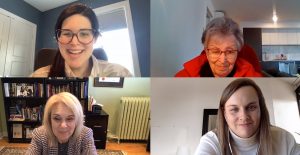 Among those who worked on COVID Stories were (clockwise, from top left) Rebecca Kaufer, Administrative Coordinator of the JGH Humanization of Care Committee; Lois Kamenitz, Ph.D., a Committee volunteer; Krystle North, Senior Advisor on Quality, Risk Management and the User Experience for CIUSSS West-Central Montreal; and Neomi Kronish, Ph.D., a Committee volunteer. (Click to enlarge.)

It was this kind of experience that Neomi Kronish, Ph.D., a volunteer with the JGH Humanization of Care Committee, hoped would be documented in COVID Stories. Ms. Kronish herself underwent serious medical difficulties in 2011 and she remembers “talking about it afterwards with everyone I met, in the hope that it would help me get rid of the residual emotional pain I was still feeling.”

So when the pandemic hit, Ms. Kronish spoke with her colleagues on the Committee, figuring that COVID-19 patients who had recuperated might appreciate a similar opportunity to tell their stories and publicly thank hospital staff.

Though the number of stories is relatively small, each is remarkable in its own way, says Rebecca Kaufer, the Committee’s Administrative Coordinator. “One woman told us that since visitors weren’t permitted to see her while she was hospitalized, she grew to think of the hospital staff as her own little family. That really resonated with me.”

Krystle North, a Senior Advisor for Quality, Risk Management and the User Experience for CIUSSS West-Central Montreal, was struck by the fact that “whether a few months or a year had passed since the patients were discharged, they were still very emotional about what had happened to them. All of them cried at some point while telling their story, which tells me how powerful the experience was for them.”

What impressed Lois Kamenitz, Ph.D., a Committee volunteer, was “the incredible courage these people had. We don’t usually stop to think about it, but when you’re that sick, it takes real courage to decide you’re going to live. I’m sure these people are going to relive these events for a very long time.”

Ms. North is also hoping the stories will reach—and touch—some of those who have resisted getting fully vaccinated. “Once they read what these amazing people went through, it might just be the final nudge they need in order to say, ‘You know what? I’m going to get vaccinated.’”

Students send their hearts to JGH staff on Valentine’s Day