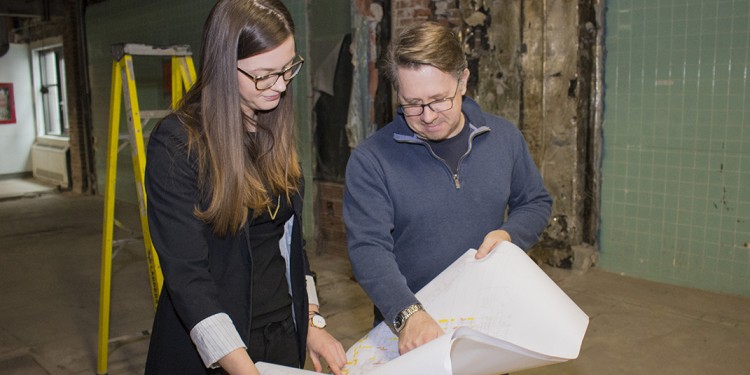 On the third floor of Pavilion B, where the hospital’s old operating rooms have been demolished to make way for a new Psychiatry In-Patient Care Unit, JGH Project Manager Julianne Desforges reviews architectural plans with Stéphane Richard, a mechanical technician with SNC Lavelin.

A member of the demolition team removes an old piece of pipe from the floor of Pavilion B, where the new Psychiatry In-Patient Care Unit will be built.

The most complicated demolition project in the history of the JGH—and one of the most extensive—has been completed in Pavilion B, so that work can begin later this year on a new Psychiatry In-patient Care Unit, with nearly double the space for patients’ rooms and treatment areas.

One or two previous projects may have covered a larger area, says Georges Bendavid, Director of Technical Services for CIUSSS West-Central Montreal. However, the most recent undertaking was by far the most complex, because of the need to deal with the numerous water pipes, oxygen lines, ventilation ducts and various structural elements that once served the operating rooms in the 28,000‑square-foot space. Pavilion B’s surgical services were transferred in 2016 to new operating rooms in Pavilion K.

Pavilion B was completed in 1933 and went into use when the JGH was launched in 1934, with extra sections added in 1958 and 1965. “That’s why, when you cross this work site, you’re really crossing the history of this hospital, the heart of this hospital,” says Mr. Bendavid.

However, the later add-ons caused significant complications in 2017, explains Project Manager Julianne Desforges. When plans for the demolition were drawn up, it was hard to be certain that the old blueprints from the 1930s, ’50s and ’60s accurately pinpointed every water, oxygen and electrical line. “We had to proceed with great care to be sure we did not accidentally cut a line that was unfamiliar to us,” she says.

Demolition proceeds on the third floor of Pavilion B. Slated for removal at the rear are the turquoise tiles that once covered the walls of the hospital’s old operating rooms.

These unknowns—plus the removal of decades-old asbestos (a scrupulous, three-month process) and the need to minimize noise—made for a lengthy work schedule that lasted from late August 2017 to the end of January 2018.

Demolition was the first phrase of what will ultimately be a $13 million transformation of the third floor, with $5 million supplied by the JGH Foundation (see sidebar), plus substantial funding from the Ministry of Health and Social Services.

So great is the need for a new Psychiatry unit that preparation of the site is well under way, even though the JGH Foundation still needs to raise nearly $3 million of the $5 million that must come from public donations.

When the new facilities open (tentatively, in 2019), the treatment area on the third floor of Pavilion B will be brighter, airier, more spacious and more conducive to healing for psychiatric in-patients. Special attention will also be paid not only to the safety of the patients, but to the security of the staff who provide care.

Larry Sidel, Senior Vice-President and Chief Development Officer for the Foundation, says significant funds are needed not just because of the extent of the new facilities (28,000 square feet), but because the furniture and fittings—everything from door handles to hinges to sinks to scratch-resistant wall surfaces—are more costly, having been specially designed to be safe for psychiatric patients.

Since 2015, the Foundation has raised considerable sums through the annual Mindstrong fitness event, with a new fund-raising project, the Peace of Mind art display, to be launched later this year.

However, Mr. Sidel says, public support is still urgently needed. Information is available about the renovation of the Psychiatry In-Patient Care Unit, and online donations are gratefully accepted.

If the Foundation’s fund-raising plans proceed as hoped, the new space should be ready for patients sometime next year.

Workers inspect electrical wiring and pipes in the ceiling during demolition on the third floor of Pavilion B.

“In preparing for the demolition, we found that the operating rooms were equipped with everything you can imagine,” says Mr. Bendavid, referring to the five networks of medical gases, seven networks of water pipes (hot, cold, chilled, recirculated, and more), three electrical networks, and a complex array of ventilation ducts that snaked as high up as the sixth floor.

For this reason, Ms. Desforges continues, Technical Services had to work closely with Nursing, Maintenance and Inhalation Therapy to conduct a painstaking review of the old blueprints.

Care also had to be taken to ensure that cutting the supply of water and electricity to the third floor had a minimal impact on activities elsewhere in Pavilion B.

Limiting the noise was especially difficult, since a hospital is vastly different from an office building, where disruptive work can often be performed from early evening, through the overnight hours, to early morning.

By contrast, large sections of Pavilion B are occupied around the clock: just one floor above the work area are the current Psychiatry unit and the Division of Palliative Care.

Adding to the racket was the fact that workers had to remove a great deal of terrazzo and ceramic tiles, whose destruction generates considerably more noise than breaking through gyproc.

Demolition continues on the third floor of Pavilion B, the eventual location of the new Psychiatry In-Patient Care Unit.

The solution, says Ms. Desforges, was to have the work at the JGH begin no earlier than 8:00 a.m., which is rare in an industry where the workday usually starts at 6:00. For the noisiest demolition, workers also followed a repeating cycle of 30 minutes of commotion, followed by one hour of relatively quiet clean-up. Mr. Bendavid adds that in some instances, walls were first sawed and weakened to shorten the period of the noisiest demolition.

Also necessary during this process was an inspection by a structural engineer. In its original form, the third floor had few windows, which are unnecessary for operating rooms, but will be needed for the natural light that is so vital to patients. As a result, says Ms. Desforges, an inspection had to confirm that the pavilion will maintain its structural stability after large openings are made in the walls of the third floor to accommodate windows.

“Obviously, these were major challenges,” says Mr. Bendavid, “but it’s very satisfying to know that with hard work, the expertise of our team and the cooperation of teams throughout the hospital, we will have a space that will help patients in the Department of Psychiatry with their recovery.”

JGH helping smokers to butt out across Quebec and Canada