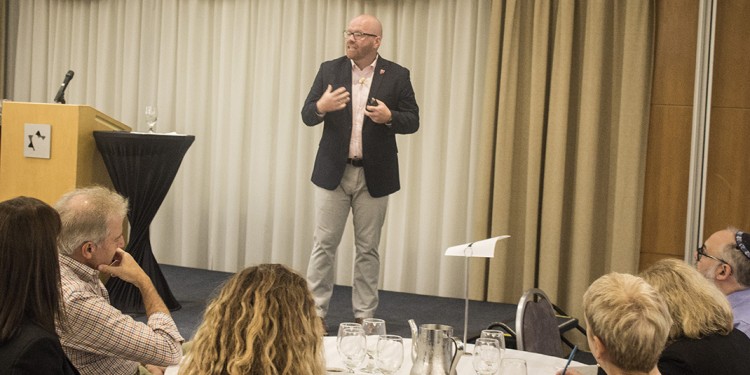 Among the top priorities for all healthcare professionals is “to build the opportunities for patients to feel respected, heard and included,” says a top executive of Planetree International, a global organization that champions a user-centred approach to care.

Jim Kinsey, Director of the Planetree Member Experience, at the Gelber Conference Centre.

Addressing board members, managers and users’ committee members of CIUSSS West-Central Montreal, Alan Manning, Planetree’s Executive Vice-President, said that while it’s commendable for staff to feel compassion toward their patients, clients and residents, these feelings alone are not enough.

“What we need to do is take what is already in our hearts and in our minds, and make sure it’s also in our behaviour,” Mr. Manning said during a day-long retreat on September 20 at the Gelber Conference Centre.

Mr. Manning and his Planetree colleague, Jim Kinsey, presented an overview of their organization’s philosophy, following a decision by the CIUSSS to join Planetree and launch a more systematic process of improving the network’s focus on the needs of users and caregivers, as well as the requirements of staff. Donald Berman Maimonides Geriatric Centre and Donald Berman Jewish Eldercare Centre, member facilities of CIUSSS West-Central Montreal, joined Planetree several years ago.

Founded in 1978, Planetree has built a solid reputation by working in partnership with at least 700 healthcare institutions in 25 countries. The Connecticut-based organization advocates a person-centred approach, in which all employees—including those with little or no direct contact with users—see themselves as responsible for fulfilling the needs of users and their families.

“This means putting our clients, patients and residents, along with their families, at the centre of decisions and seeing them as experts and partners who work alongside professionals to get the best outcomes,” said Dr. Lawrence Rosenberg, President and CEO of CIUSSS West-Central Montreal, in his introductory remarks.

“Fundamental to this approach is the belief that connecting staff with the purpose of their work and educating them with new skills in a supportive, empowering environment unleashes their potential as effective agents of change,” Dr. Rosenberg explained.

Mr. Kinsey, Director of the Planetree Member Experience, elaborated on Mr. Manning’s final point, noting that the concept of engagement applies to staff, as well as healthcare users.

Members of staff need to feel and to be shown that their opinions and recommendations matter, Mr. Kinsey said. Not only does this ultimately contribute to better care, it results in a happier and more productive workplace.

“Partnerships with staff are essential in making sure that we don’t lose our way and start creating things that are not from their perspective,” he added.

Mr. Kinsey said that for many years, healthcare professionals have been taught to believe that improvements in safety and quality will result in a more person-centred form of care.

“But that’s only partly true,” he stated, explaining that Planetree’s experience has shown that first sharpening the focus on person-centred care will lead to an improvement in safety and quality. “It’s amazing to think that for all these years, we may have gotten the equation wrong.”

In explaining the importance of compassion, Mr. Kinsey said this trait is more than just “a warm, fluffy thing.” Rather, it should be the automatic impulse to make the user part of a decision-making process that combines the professionals’ expertise with the user’s personal insights and requests.

He also urged his audience to try to eradicate institutional thinking, “which functions for the benefit of the institution and not for the folks it serves.”

Mr. Kinsey acknowledged that users can sometimes become highly emotional when care has not been provided as well as it should. “But we need to get past that emotion and listen to what they’re really saying, so we can know how to make it better—and, more to the point, how they can help us make it better.