Transforming blank, impersonal walls into sources of beauty and joy 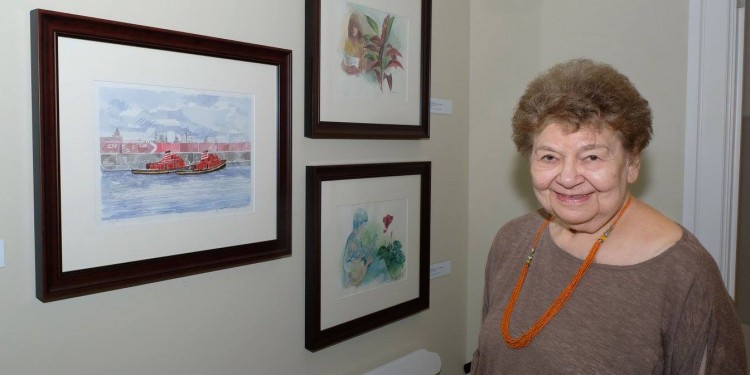 Rita Briansky, at the Hope & Cope Cancer Wellness Centre, with a painting (at left) by her late husband, Joseph Prezament, and two of her own watercolours.

Almost every square inch of floor space in the Hope & Cope Cancer Wellness Centre is dedicated to healing—and now the same can be said for its walls.

Life-affirming colour and vitality, in the form of 60 works of art that were provided by the not-for-profit Art for Healing Foundation, are doing their part to lift the spirits of the Centre’s users, who are battling cancer or recovering from treatment for the disease.

The artwork, created by renowned Quebec artists, was officially unveiled this past autumn to coincide with the Centre’s 10th anniversary. The project is dedicated to the memory of Miriam Pinchuk, a generous and loyal donor to Hope & Cope, who passed away in August 2016.

“My mother’s spirit lives within the walls of this house,” says Earl Pinchuk, who co‑founded Art for Healing with Gary Blair. Adds Mr. Blair: “The Wellness Centre is such a beautiful space, allowing the art to live, breathe and be appreciated by so many people with cancer.”

Among the artists whose works are on display are Rita Briansky, Mel Boyaner, Nycol Beaulieu, Burt Covit, Jackie Cytrynbaum, Marilyn Gelfand, Michel Piquette, Bernard Rajotte, and Sue Rusk (a volunteer yoga instructor at the Centre), all of whom attended the vernissage  in September.

“When the Wellness Centre opened 10 years ago,” recalls the Centre’s Manager, Marcelle Kecman, “we received beautiful art work generously donated by Montreal-based artists and the Board of Directors of the former Gilda’s Club. We were blessed from the beginning.”

The Art for Healing Foundation has also made its presence felt at the JGH in the Morry Marcovitch Gallery, in the Division of Nuclear Medicine. Elsewhere in CIUSSS West-Central Montreal, works of art provided by the Foundation are on view at the Donald Berman Maimonides Geriatric Centre in the Joseph Prezament Gallery, the Mamie Colton Gallery, and the Norman & Pearl Leibovitch Hebrew Letter Gallery.

Nycol Beaulieu with a painting of hers that she donated to the Hope & Cope Cancer Wellness Centre.

Mr. Pinchuk and Mr. Blair are avid art collectors who believe passionately in the positive impact that art can have on healing. They have realized their ideals through Art for Healing, which they founded in 2002 to transform drab, blank walls—commonly found in hospitals and other healthcare settings—into sources of beauty and inspiration.

The Foundation was born of a combination of personal experience, a little bit of luck and a whole lot of perseverance. In 2001, Mr. Pinchuk took a sabbatical from the family business to follow his passion and explore the possibility of opening an art gallery. At the same time, he and Mr. Blair were visiting a close friend, a visual artist who was gravely ill, at the Royal Victoria Hospital.

When their friend died, they were saddened not just by his passing, but by the fact that he had spent the last few days of his life immobile and staring at the featureless walls of his hospital room.

“That was the ‘light-bulb’ moment for me,” explains Mr. Pinchuk. “I realized that Montreal didn’t need another art gallery. What it needed was a foundation that would bring art into the healthcare setting.”

Shortly afterward, he used his 40th birthday bash to launch the idea that he and Mr. Blair had developed, kick-started by $8,000 that they raised that evening. At the top of their agenda was working out the complicated logistics of how to create a financially viable and sustainable foundation.

Their first commission—three prints installed in the newly renovated Hematology Unit at the Montreal Children’s Hospital—was a resounding success. Through word of mouth in the art world, as well as favourable media coverage, their organization grew steadily.

As Mr. Pinchuk proudly notes, since its inception, the Art for Healing Foundation has installed over 10,500 works of art in 76 institutions in Quebec, Ontario, Newfoundland and Labrador, Manitoba, British Columbia, Nova Scotia and Paris, France.

Ultimately, the partners say, they are motivated by their belief that everyone deserves to be nurtured by their environment. “It’s so gratifying to share our passion for art and to bring beauty and joy into people’s lives when they need it most,” Mr. Pinchuk adds.