Transporting patients through the hospital can be a moving experience 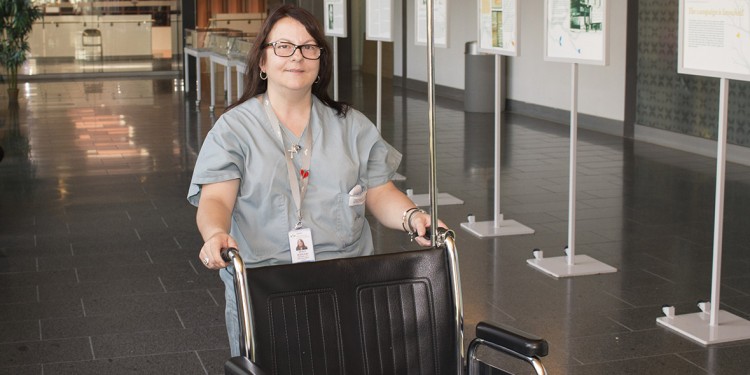 When I was young, I always had a feeling that my career would involve helping people. That’s why it gives me such great satisfaction, as an orderly and a member of the Transport Team at the JGH, to know that this is exactly how things turned out. What I never imagined was the roundabout route—sometimes exciting, sometimes difficult—that brought me to this point.

By the time I entered high school in Montreal, I was fairly sure I was headed for a future in either health care or law. The turning point came when I heard about a program at Northmount High School that enabled students to earn a vocational diploma and a secondary-school diploma at the same time. So I transferred and, in 1982, graduated with a standard diploma, plus another that qualified me as a dental assistant. My career in health care lay before me.

But not just yet.

Everything was put on hold, because my aunt, with whom I had been very close, was diagnosed with breast cancer. I wanted to join the others in my family in doing as much for her as I possibly could. It had been my dream to take care of people, and now I had a task that I put my heart into. Sadly, though, at the age of 42, my aunt lost her battle.

In the aftermath of her death, I felt it would be best for me to go straight into the work force, which is how I became a receptionist at a law firm downtown. The knowledge and experience that I gained were worthwhile, but nearly a year later, I decided it was time to put my diploma to use. So I found a position as a dentist’s assistant and stayed with him for 8½ years.

Along the way, I married and had two children—a boy and a girl—and was fortunate to be able to leave my job and stay home with them. As they grew, so did my desire to return to work. But once again, fate intervened. My father was battling stage 4 pancreatic cancer, and I put my plans on hold to be with him.

After my father’s passing in 2005, I realized that I’d been away from the work force for more than 10 years, and I knew it was now or never. And so, in my 40s, I went back to school and earned my diploma as a nurse’s aide from the Pearson Adult and Career Centre in LaSalle.

Never was there any doubt about where I wanted to work: the Jewish General Hospital. That’s where my late mother’s doctors had their offices, and it’s where I gave birth to both of my children. What I sensed back then—and what I’ve since confirmed through experience—was that the JGH has genuine warmth and a great atmosphere. It’s a place where your work is valued and you can learn a great deal.

In 2008, to my delight, I was hired at the JGH as an orderly, bringing comfort and support to patients for whom I continue to perform a variety of tasks, such as positioning them in a bed or chair, helping with their meals and changing their linen.

Three years later, an opportunity opened up when the JGH began looking into starting a Transport Team, whose role is to move patients by wheelchair, stretcher or bed for treatments or tests. Under Rosalie Johnson and Samantha Prahalis of the Nursing Resources Centre, the Transport Team became a reality, and I was proud—along with Danny Venuto—to be one of its first two members.

Today I split my time between transport and my tasks as an orderly, but a single goal is behind everything I do: to accomplish whatever I can to make patients feel at ease during difficult and stressful times. That means speaking to them with sensitivity, concern and humour, and not just going through the motions of taking them from one place to another.

I always ask patients how they’re feeling and what I can do for them. If a patient is at an emotional low point and doesn’t feel like going for a test, I do what I can to raise their spirits and prepare them psychologically. In my own way, I try to make the patient’s stay in the hospital as smooth and easy as possible.

What’s especially gratifying is to hear from patients or their relatives when they appreciate something I’ve done. It’s very rewarding to know that your work is valued, which is why I hope to remain in good health and spend the rest of my career at the JGH.

Looking back, I can see how important it was for my late parents to instill in me and my sister the idea that hard work and sacrifice always pay off. I’m thankful that my whole family has always been there to offer support and to urge me, above all, to enjoy what I do. That satisfaction comes in seeing a smile on a patient’s face and knowing that I helped put it there.

Orderly and member of the Transport Team