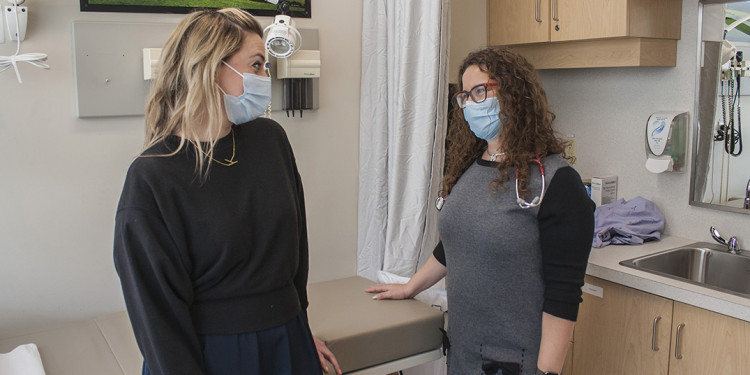 In the MPN Clinic at the JGH, Karen Gal (left) consults with her hematologist, Dr. Shireen Sirhan. (Click on photo to enlarge it.)

In 2017, two years after being diagnosed with a chronic blood disease, Karen Gal and her family returned to Montreal from Vancouver with mixed feelings—“great anticipation about the move, but also a lot of nervousness” over the future of her medical care.

Ms. Gal had an illness—a relatively uncommon type of blood cancer in a grouping known as myeloproliferative neoplasms (MPN)—that was under control. However, she was concerned about the continuity of her care under a new doctor who might not be thoroughly informed about all aspects of her rare condition.

Today Ms. Gal recalls her relief on arriving at the MPN Clinic in the Segal Cancer Centre and realizing she had nothing to worry about. In fact, the JGH clinic, which had opened in 2010, was the first in Canada to focus on MPNs, and its co‑founder, Dr. Shireen Sirhan, was about to become Ms. Gal’s own hematologist. 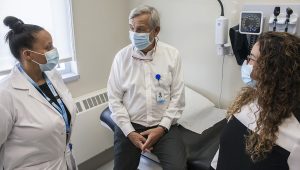 The mainstays of the MPN Clinic: Nurse Clinician Sabrina Fowlkes (left) and hematologists Dr. Jaroslav Prchal and Dr. Shireen Sirhan. (Click on photo to enlarge it.)

Ms. Gal had some idea of what to expect at the JGH, since she and her husband had lived in Montreal until 2004 and she had given birth to their eldest son at the hospital. Still, there was cause for apprehension, since her medical condition had changed during their years in Vancouver.

Since MPNs affect the blood, they can cause or contribute to clots (notably, in the veins of the abdomen), hemorrhages, deep-vein thrombosis, heart attack or stroke, explains the clinic’s other co-founder, Dr. Jaroslav Prchal, who is a hematologist and Associate Professor of Medicine and Oncology at McGill.

He notes that MPNs used to be categorized as blood disorders, but research over the past decade has led to a deeper understanding of these illnesses, resulting in their reclassification as blood cancers—not unlike leukemia, but rarer.

“Right from the get-go at the Jewish, it was such a lovely experience,” Ms. Gal says. “I immediately I felt at home, and now, all these years later, I feel healthy and well taken care of.”

Ms. Gal was a healthy, 35-year-old mother of three in 2015, when she began experiencing pain in her neck, caused by what she later learned was “an internal clot of the jugular vein, which is very, very rare.”

Since her bone marrow produces too many red blood cells, white blood cells and platelets, her initial treatment (in Vancouver, as well as in Montreal) included a series of phlebotomies, the removal of blood through a vein. However, Ms. Gal’s condition is now controlled by medication taken orally.

“Dr. Sirhan has gone beyond what I would have expected from any doctor, let alone a busy doctor at this hospital,” Ms. Gal says. “She has called me on her own time to see how I’m doing and this has done so much to reassure me.

“On one occasion, she also spoke to another specialist of mine at the JGH when I was worried about the pain I was feeling. When Dr. Sirhan called back and said, ‘I’ve spoken with your doctor and here’s what we’re going to do,’ I really felt she was watching out for me.”

Ms. Gal is quick to add that Sabrina Fowlkes, Nurse Clinician at the MPN Clinic, has also provided invaluable support and advice whenever necessary. As well, Ms.Fowlkes helps to educate nurses across Canada about MPNs and is considered a leading nursing expert on the subject.

Although MPNs and similar diseases are becoming better known to healthcare providers, information about the illnesses deserves much wider exposure, says Dr. Sirhan, who is an Assistant Professor of Medicine and Oncology at McGill University.

For this reason, she and Dr. Prchal have been diligent about organizing online courses targeted at family physicians, nurses, students and other professionals (see sidebar).

The Office for Continuing Professional Development (CPD) at McGill University will be offering healthcare professionals a free, online mini-course on myeloproliferative neoplasms and myelodysplastic syndromes. It will be led by Dr. Jaroslav Prchal, co‑founder of the MPN Clinic at the JGH.

More information, as well as the starting date for this and other courses, is available from McGill’s Office for CPD.

This mini-course has been made possible, thanks to an educational grant from Edward Pascal, President and CEO of Kombi Sports Inc., and his wife, Phyllis.

Dr. Sirhan says that when she and Dr. Prchal opened the clinic—thanks, in large part, to a donation from Montreal philanthropist Edward Pascal—“hardly anyone seemed to care about MPNs, let alone consider establishing a dedicated clinic.” That situation has since changed, with the development of a Canada-wide network of physicians who specialize in these diseases.

In its early days, Dr. Sirhan says, the MPN Clinic was open for half a day or less each week. Before the most recent pandemic shutdown, it was usually busy for a full day per week, with some patients coming to the JGH from as far away as Ottawa, northern Quebec, Drummondville and Sherbrooke.

“The disease is like a puzzle and the clues are not always clear,” Dr. Sirhan explains. “There are a lot of competing symptoms and problems, which we have to manage dynamically.”

“The problem in diagnosing these patients is that they often have non-specific problems and symptoms,” Dr. Prchal continues. “They may be tired or agitated for unknown reasons. Perhaps they can’t sleep or they have headaches, and they don’t realize that these are symptoms of a disease.”

As a result, Dr. Sirhan says, it may take a while before the patient is referred to the MPN Clinic by a general practitioner. “Fortunately, at our clinic, patients have access to tests and diagnoses, and we can manage them in complex situations, such as before an operation or during pregnancy.” In addition, patients have access to clinical trials where they may receive state-of-the-art treatment.

Research is also yielding deeper insight into MPNs, with Dr. Sirhan serving as President of the Canadian MPN Group and as Vice-President of the provincial group, both of which focus on the diseases.

“The research has blossomed since 2005, when the mutation was first described,” says Dr. Prchal. “That discovery basically started a whole new field of research.”

This is a source of comfort to Ms. Gal, who has no illusions about the seriousness of her condition. “I’m only 41 years old, I have this chronic blood condition and I’m on medication that could have significant side effects.

“But I feel confident that I have the right support here. I’m so happy to have Dr. Sirhan and Sabrina on my side.”