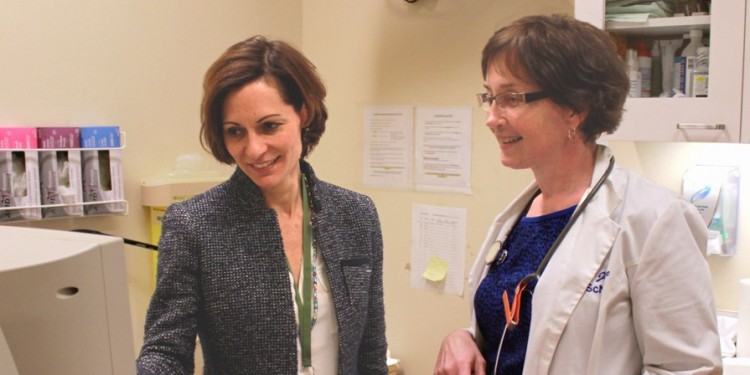 Six weeks into the pregnancy, something is clearly wrong. The mother-to-be is experiencing pain and bleeding, and she may be at risk for a miscarriage. But she’s only in her first trimester, and the initial appointment with her obstetrician (or general practitioner or midwife) is still five or six weeks away.

Previously, her only recourse as a JGH patient might have been to head for the Emergency Department not just for immediate treatment, but for weeks of follow-up care. But now specialized help is available in the Early Pregnancy Assessment Clinic (EPAC), whose focus is on providing treatment, advice and support to women who have a wide range of concerns, but no health care provider to turn to during the first trimester.

Dr. Stephanie Klam, a JGH obstetrician-gynecologist who launched the clinic in 2014, says the Emergency Department deals well with urgent cases. However, its overworked staff does not have the specialized training or the resources for other situations—for instance, follow-up care after an ectopic pregnancy or advising a woman with a history of miscarriages whether her current pregnancy is progressing well.

“Unfortunately, if a woman miscarries in the ER, there’s little that can be done to provide comfort or follow-up,” says Dr. Klam, who is trained in maternal-fetal medicine. “Of course, a miscarriage can happen in our clinic, too, but we’re better equipped to deal with it medically and by providing psychological support.”

Referrals to the once-a-week Friday clinic—whose staff includes two nurses, one of whom is a Clinical Nurse Specialist—come not only from the Emergency Department, but from general practitioners and midwives. Dr. Klam has also found that a significant number of Emergency referrals are women who have no doctor of any kind.

In addition, the clinic is useful as a teaching resource for McGill University residents and medical students in obstetrics, family medicine and emergency medicine, especially trainees who want to improve their ultrasound technique.

Dr. Klam said she was inspired to create the clinic after reading about a similar Ontario facility in the Journal of Obstetrics and Gynecology of Canada. She notes that while the clinic is not unique in Quebec, it is now among the very few such facilities that can substantially improve the patient experience during the first trimester.

“It’s great to know that pregnant women are not only receiving the care they need,” she says, “but they’re getting it and from trained staff who can do their best on their patents’ behalf in surroundings that are equipped to manage their needs.”

From the outback to the operating room:
My journey as a nurse