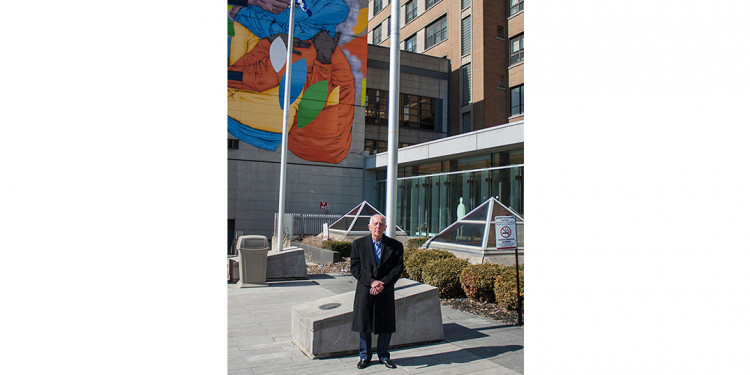 Dr. Charles Gomberg near the main entrance of the JGH, where the 96-year-old veteran internist spent a career that spanned seven decades. (Click on this or any photo to enlarge it.)

In 1931, when Lord Bessborough, the Governor-General of Canada, turned the first sod to start construction of the Jewish General Hospital, 6-year-old Charles Gomberg was there with his parents to see it.

Three years later, Charles returned to witness the dedication ceremony of the newly completed JGH, just as it was about to open its doors to its first patients. 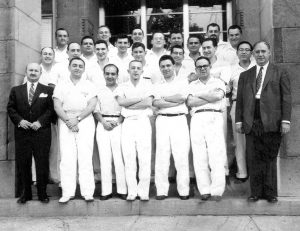 In the mid-1950s, Dr. Charles Gomberg (front row, centre) was among the medical residents at the JGH. For this photo, he and his colleagues gathered on the front steps of what was then the JGH School of Nursing and is now known as Pavilion A. (Click on this or any photo to enlarge it.)

In 1952, Charles was back, this time with “Dr.” in front of his name, as he launched what was to become a professional association that would last 70 years.

While a handful of exceptional JGH physicians have crossed the half-century mark (and beyond), it’s likely that none has had a personal relationship with the hospital that matches the 90-year connection enjoyed by Dr. Charles Gomberg.

It’s been 18 months since he stopped seeing patients, and only this past spring did he decide not to renew his medical licence as a specialist in internal medicine.

Nevertheless, Dr. Gomberg, 96, has remained a frequent visitor to the hospital’s Health Sciences Library, as well as a regular at Grand Rounds lectures, attending in person before the COVID-19 pandemic and online for the past couple of years.

On the day of his interview for this article, the spring weather was sunny and mild, prompting Dr. Gomberg to walk half an hour to the JGH from his home, which is east of the hospital on Côte-Sainte-Catherine Road. “It’s not something I do often,” he says with a smile, “but it’s been so pleasant. I couldn’t resist.”

Asked why he spent his entire medical career at the JGH, Dr. Gomberg says simply, “It always felt like home. I loved it here and there was no point in going anywhere else.”

Thinking back over the decades, he notes that most of the people he worked with “felt the same way, especially in the early years when the hospital was much smaller. There was an air of camaraderie, almost like being in the same family. You always knew you had the support of your colleagues and could call on them.” 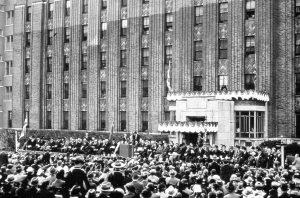 On October 8, 1934, at a ceremony that Dr. Charles Gomberg attended as a child, Lord Bessborough, the Governor General of Canada, officially opened the doors to the JGH. Until 1950, the entire hospital consisted of what is now known as Pavilion B.

As to why he chose not to step away in 1990 at the conventional retirement age of 65, Dr. Gomberg says there was “no compelling reason to stop. I always enjoyed what I was doing, to the point where it wasn’t really what I thought of as work. It never became a burden.

“In fact, as far back as I can remember, there was nothing else I wanted to do with my life. My parents were very proud that I became a doctor, which was always their ambition for me.”

Dr. Gomberg’s parents immigrated to Montreal separately from Ukraine (which was then part of Russia), his mother sometime in the 1880s and his father in 1905. They married in 1907, and when Charles came along in 1925, he was the last child of their eight children, seven of them boys.

“My impression is that we moved fairly often, maybe every year,” Dr. Gomberg says with a laugh. “Landlords weren’t too happy about renewing a lease for a family with all those boys. It was a busy household, I can tell you that—one bathroom for 10 people.”

No matter where they lived, it was generally in the downtown neighbourhoods around Saint-Laurent Boulevard and Saint-Urbain Street, once known as Montreal’s “Jewish ghetto”.

Dr. Gomberg’s father initially found employment as a sewing machine operator, but later ran his own businesses—first as a manufacturer of men’s caps and then as a retail furrier. With eight children to look after, his mother had her hands full as a homemaker. 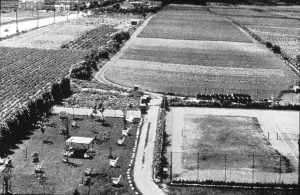 Dr. Charles Gomberg recalls that during the 1930s, the newly opened JGH was still surrounded by a great deal of open land. The field on the west side of the hospital was used to grow vegetables for patients’ meals and as a recreation area for patients and staff. In the photo, Côte-Sainte-Catherine Road can be seen at the upper left.

Young Charles attended Strathcona Academy (then part of the Protestant School Board of Greater Montreal) and went on to earn a B.Sc. at McGill University. But making the leap to medical school was tough—in part, Dr. Gomberg says, because of the quota that McGill imposed on the number of Jews who could be admitted.

As well, since so many discharged World War II veterans were returning to Montreal in the mid- to late 1940s, competition for a place in medical school was fierce.

So when Tulane University said “yes”, Charles jumped at the chance and headed to New Orleans where he earned his M.D. in 1952.

Then it was back to the JGH for an internship (1952-53), a year of training at the Veterans’ Hospital on Queen Mary Road, a one-year fellowship in Chicago, and a two-year residency in internal medicine at the JGH in 1955 and 1956. He began practicing at the JGH in 1957.

What lingers in Dr. Gomberg’s mind is the dramatic transformation the hospital has undergone. He recalls that during the 1930s, the JGH was largely surrounded by open fields; the only business in the area was a garden centre and nursery on Côte-des-Neiges Road.

During the early years of Dr. Charles Gomberg’s career at the JGH in the 1950s and ’60s, when telephone calls came into the hospital, switchboard operators manually routed them to their destinations.

Dr. Gomberg also remembers going down to the basement from time to time, where he visited the all-female team of switchboard operators who routed all of the incoming telephone calls in the decades before the digital era.

This was a period when the elevators (not yet automated) were staffed by a pair of cheerful operators, Wilfred and Mary, who knew everyone on staff by name and became fixtures of the hospital.

The only notable drawback, says Dr. Gomberg, was the long overdue medical library, which opened only in 1957 in the space now occupied by the main-floor boardroom in Pavilion B. It remained inadequate for the hospital’s needs until the mid-1970s, when it moved into expanded facilities on the second floor of Pavilion A.

Given his lifelong thirst for medical knowledge and education, Dr. Gomberg says he still marvels at the power of the internet, because “access to information is instantaneous and you can keep track of developments throughout the world. That’s why I’ve continued to use it, right up to the present.”

He also hopes to keep visiting the hospital and its library whenever he can, because “the pleasure of learning never ends.” Pausing, he chuckles and adds, “But these days, I tend to come here primarily when I need medical help myself. Then I’m a patient just like anybody else.”

Improving care by bringing staff together and ideas to life